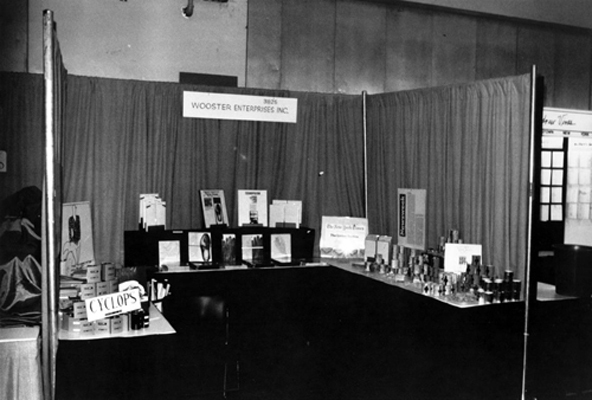 Soho was pretty much invented as a cool neighborhood by Fluxus. Fluxus founder, the artist George Maciunas, convinced developers to re-brand the area as an artist community making live-work lofts affordable for artists.

Influenced by John Cage’s experimental chance-based music, Duchamp’s Dadaist readymades, and the Constructivists' amalgamation of life and art, Fluxus, as you may already know, was the most playful, most democratic, and arguably the most interesting avant-garde movement nurtured in New York City (and beyond) in the 1960s and 70s. Artists such as Alison Knowles, Nam June Paik, and Yoko Ono set about to: “Promote living art, anti-art, promote NON ART REALITY to be fully grasped by all peoples…”  The artists produced ephemera both retailed and mailed, box sets, kitchen aprons, performances pieces, festivals and even plans to co-opt an island. The movement is perhaps most famously associated with Yoko Ono’s cut piece, but what I find most interesting about Fluxus was how the artists capitalized off of real estate ventures in downtown Manhattan.

Soho was both its haunt and its legacy. 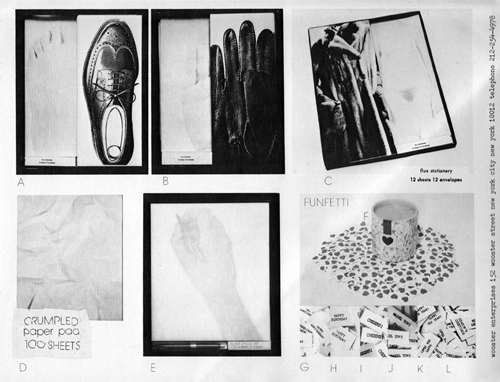 Recently, there has been a resurgence of interest in the printed matter, ephemera and films produced during the height of Fluxus, with substantial exhibitions in 2011 at the MoMA and the Grey Gallery at NYU. Now the one-year-old Chelsea gallery, Churner and Churner, has opened “Wooster Enterprises,” an eponymously titled show dedicated to the small, short-lived Fluxus-aligned design studio.

Wooster Enterprises, a name that perfectly conjures up a downtown, late 1970s avant-garde sensibility, has been conspicuously absent from many of the recent Fluxus shows. Before the current exhibition, Wooster Enterprises had been, along with other “minor” histories in NY, lost in the sands of time. The show at Churner and Churner although modest, serves to pull it out of obscurity. Three small vitrines display a handful of photographs. A littering of company invoices are adhered in a horizontal line that snakes around the gallery wall. Founded in 1976 and lasting for just two years, Wooster Enterprises was created by the couple Jaime Davidovich and Judith Henry, both of whom were Fluxus-affiliated artists living in Soho.

For Wooster Enterprises, the mission was specific: to create all aspects of design, production, and distribution for the Fluxus community. Together, the duo produced a series of paper goods—greeting cards, writing pads, confetti, etc.—all equally wry in spirit and minimal in design, and these products were sold to department stores such as Bloomingdales and Macy’s. Sadly, by 1978, Wooster was forced to go out of business; without a financial backer and many outstanding payments, the team could not survive on their minimal sales alone. Davidovich went on to work on a series of public access art television programs and Henry worked as a fine artist (both of them are still living, and have helped research and produce the show).

Can an art project also be a business? Can commerce itself be a progressive social tool? Does a work of art have meaning when it functions outside the context of Art? These questions and others come to mind while browsing the hundreds of Wooster invoices pasted along the gallery walls. In designing minimal and evocative objects—pieces of “high art” disguised as salable products—Wooster Enterprises flirted with the very terms of radicalism through the entanglement of the creative and the corporate. 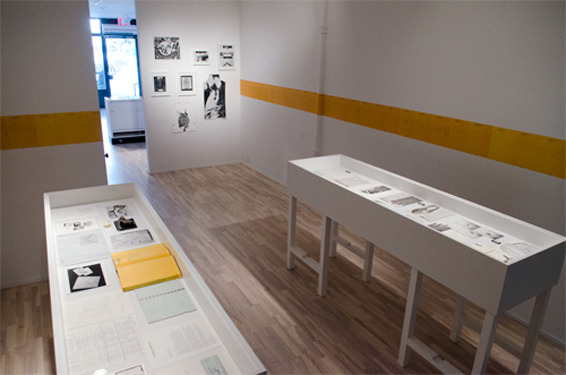 The subsequent failure of the Wooster design studio seemingly clarifies where art and commerce inevitably meet, however, one could say that perhaps the vision of the movement as a whole establishes a different truth. The concept of the “artist-loft” still remains a totally viable concept. Ironically, what began as Maciunas’ grand scheme to create an affordable artist community is now a methodology employed by real estate developers to promote the growth and subsequent gentrification of various areas (aspiring Soho’s) across the US and beyond.

Posted by ArtSlant Team on 7/30/12
Tags: design, ephemera, Fluxus
ArtSlant has shutdown. The website is currently running in a view-only mode to allow archiving of the content.