Nick Briz and I 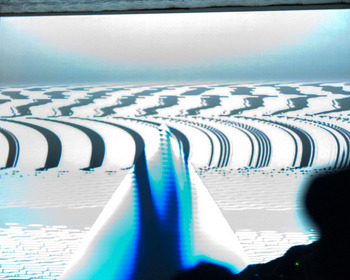 hit it off immediately, he had just arrived from Florida to start the Film, Video and New Media program at the School of the Art Institute of Chicago where I was in the second year of my Masters.

Nick was passionate about moving-image work that groped at the borders of the never-been-seen, he had played in noise bands for the majority of his college years, he is a prolific maker of Net Art and a budding academic and educator. He was the first to write a Wikipedia entry on Glitch Art back in undergrad at University of Central Florida as well as co-founding the first GLI.TC/H conference which just celebrated its second manifestation last fall in Chicago. He taught me how to make my first glitch piece by opening an image file with a text editor to gain access to the indexical Ursprung of the digital representation itself. He was incredibly excited to be in Chicago as it is the Mecca of new media, specifically, Dirty New Media. I wondered how Chicago, the Second City of all places, had become the center of the amorphous, although increasingly centralized (under Rhizome in New York) artistic practice known as New Media Art.  The answer lies four decades ago.

At the University of Illinois at Chicago in 1971, Dan Sandin began work on what would become known as the Sandin Image Processor, an analogue computer that could manipulate video images by manipulating the gray-level input. In effect, he had generated an altered field of vision – one that had been mechanically manipulated to transform the simulacrum of video into representations without the pretension of verisimilitude. In the world of the moving image, this was a schism-moment, to uphold the allure of the image or to reveal what the image was: a mirage made to shimmer through voltage oscillation.

Prior to this, Sandin had experimented with color photographs by using chemicals and enlargers to distort and, as he says, “abstract naturalistic images into something more psychedelic.” He had also been doing performances using musicians and Super 8 movies and it occurred to him that by taking the concept of a Moog Model 2, video could be altered in real time. One could “flow with image modification as a musician flowed with their instrumentalities.” What came out of this was the Sandin Image Processor (IP).

When speaking with Sandin, one realizes that he is very aware of technology as media, as instruments for communication. Even when speaking of his latest work on virtual reality, a medium that holds the promise of a sci-fi future, he states matter-of-factly, “Virtual reality is a medium of expression and you can generate works and experiences with it… Powerful, but it’s a medium of expression.” New Media Art, then, is just that – art made with new forms of media.

Dirty New Media as a loosely defined genre of New Media Art is differentiated by its aesthetic and its practice. As an aesthetic, it mines the technoscape as the surrealists explored the dreamscape for meaning from the smear of life’s traces. Relying on appropriation and the beauty of chance as acceptable aesthetic components of contemporary art, Dirty New Media practitioners have constructed a practice that utilizes sensibilities culled from punk, lo-fi video art, pop culture, early Net Art and glitch to disrupt the smooth functioning of an almost imperceptible web of technology and data that underlies the everyday. As a practice, open-source, copy-left and DIY approaches inculcate the aesthetic of dirty new media both as a means of validating their practice that is oftentimes appropriational but also as a matter of principle that has been an aspect of the movement since the beginning.

When Dan Sandin and Phil Morton began to disseminate the Sandin Image Processor, they wrote their “Distribution Religion,” a two-page text describing their ethos when it comes to copying in the name of culture. As Phil Morton writes, “First, it's okay to copy! Believe in the process of copying as much as you can; with all your heart is a good place to start – get into it as straight and honestly as possible.” In a conversation I had with Sandin, he mentioned that this commitment to open-source work was very much an aspect of the zeitgeist of the time when those working on cutting-edge technology were used to and embraced DIY as a matter of transforming the means of distribution, and simply because there was nowhere to buy the equipment. He also went on to say that it turned out to be the most effective form of distribution in that his IP was disseminated and built far more than commercial IP’s of the time. The story of New Media in Chicago mimics this philosophy of distribution in a cycle of experiment, advancement, education and dissemination.

Dirty New Media (DNM) is at times a generative art practice (in that some artists create their “work” through creating an algorithm or code that then manipulates the input data) but does not feverishly attempt anything that isn’t derivative of something. In fact, it is the derivation that lends it its purpose and, one could easily conclude, that DNM is a very rational response to the kind of postmodern predicament many artists find themselves in: nothing new, it’s all been done. This, perhaps, is where the punk attitude enters with the cathartic swagger of aggressive indifference.

In the past few years, aspects of New Media Art have gone mainstream such as the datamoshed Kanye West music video, Welcome to Heartbreak, to the great lament of my friend Nick who then declared the creative upheaval of glitch was over. But just as the surrealists had been appropriated into design and advertising despite the desertions and detractions by its leaders, a successful aesthetic takes on a life of its own and becomes, if it resounds truthfully, popular – a realization that Briz has since accepted himself. So what makes the corruption of verisimilitude as an aesthetic a touchstone of popular culture?

The glitch aesthetic, probably the most distinct and visceral form of Dirty New Media, like most every aesthetic, comes from a reflection upon reality mediated by the contemporary individual’s experience of subjectivity. For this observer, it is the disruption within the smooth functioning of reality that lends glitch an appeal. I could make an overly generalized statement about the continued aspiration of our culture towards ever-more efficient and seamless forms of communication and experience but it need not even be said. The introduction of iCloud this past year says it all. Air is a data stream. A cloud is condensed, visualized data. Postmodernity is a hyper-rich environment, a cloud of images, information, and stimulation that, if it works correctly, succeeds in performing the real.

(Image at top: Vaudeo Signal, "Modulating Fashions in Fades and Wipes" from the GLI.TC/H 2011 conference. Image via flickr user Ignotus the Mage)

Posted by ArtSlant Team on 2/23/12
Tags: analogue digital, glitch, new media
ArtSlant has shutdown. The website is currently running in a view-only mode to allow archiving of the content.