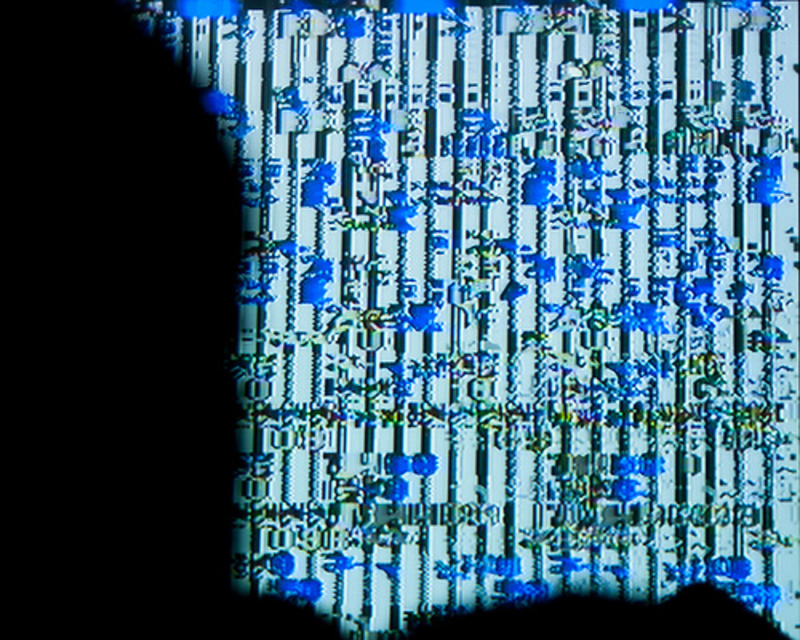 A year ago, Chicago hosted the first GLI.TC/H conference. The second year was a four-day volley (Nov. 3-6); a full weekend of exhibitions, workshops, real-time performances and a symposium that are being followed by two days of events in Amsterdam (Nov. 12-13) and a Saturday in Birmingham, UK (Nov. 19). While this article focuses mainly on “GLI.TC/H 20111” in Chicago, an upcoming article for ArtSlant will go into more depth on the expansion of the GLI.TC/H conference and Dirty New Media into a global entity.

In his opening lecture to the symposium segment of GLI.TC/H, co-organizer Nick Briz characterized glitch art as “a genre, a community, a mindset, a product and a process.” His lecture, “The Medium is the [Error] Message” focused mostly on the process of glitching and what this process unveils using the rudimentary skill of databending. Databending consists of opening an image using an editor instead of the appropriate program and then deleting, adding or changing the image code to produce a glitched image. Making a not-so-thinly veiled homage to Marshall McLuhan, Briz asserts that the value of glitch art and the practice of glitch art lies in the unveiling of the medium for what it is, a collection of 1’s and 0’s. Everything digital is determined by underlying matrices and correlated codices that can be altered. With glitching, a system is still in place, but that doesn’t mean that there isn’t room for play. 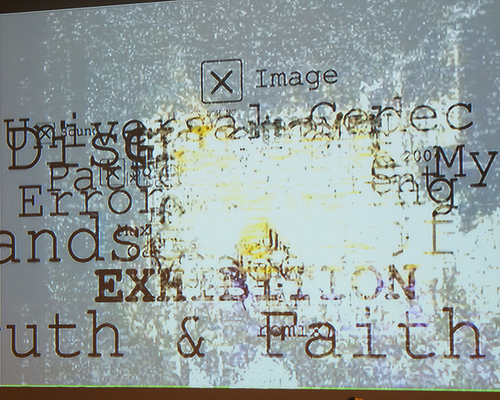 During the real-time performances that were held at Enemy this year, it was common to hear audience members and participants worry about taking a glitch too far and crashing the system. The key is not to destroy, but to bend, tweak, alter, fuck up. The few times that a system did crash, a celebratory cheer would rise from the crowd.

Marta Blicharz, a digital photographer, delivered the second lecture about the theoretical prerogative behind just such a practice by invoking Derrida’s famous idea of “reality-effects” that all but inaugurated Postmodernism.

We are faced then with mimicry imitating nothing; faced, so to speak, with a double that doubles no simple, a double that nothing anticipates, nothing at least that is not itself already double. There is no simple reference… This speculum reflects no reality; it produces ‘reality-effects.’ – Jaques Derrida, The Double Session

Glitch, as a practice, is a self-aware art form that makes use of the seemingly referent-less; that finds room for aesthetic experimentation and growth within the transmission of the surface. It inverts the innards in all their gory glory to become a new surface, a surface that perhaps will not only disrupt the simple process of simulacra, and in doing so will also create a new process, one which reaffirms the realities of cultural transmission which is above all, a process of transmutation. In essence, it is a disruption in the smooth functioning of the everyday in order to produce alternate realities. 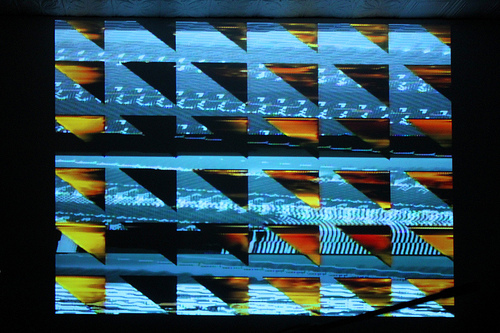 Paul Herz gave the third lecture at the symposium, an especially eloquent and poetic exegesis on Glitch the Destroyer. Pulling from Paul Verilio’s theory on speed and the inevitable chaos that will ensue, (this is the man that once said: “The invention of the ship was also the invention of the shipwreck.”) Herz characterizes the practice of glitch as somewhat of a doomsday bacchanal, a sentiment that was instantly recognizable at the performance events once again.

When I first walked into Enemy, five people over tinychat were singing along to Madonna’s “Like a Virgin” on Youtube karaoke. The audience joined in and would laugh and sing louder as the internet connection strained and stalled under the weight of five telepresences. This performance was followed by an even more raucous version of Queen’s “Bohemian Rhapsody.” Faces of delight glowed under the screen in cacophonic elation.

The celebration of the bug became reminiscent of moshing at a punk concert, dreaming with the surrealists and tripping into psychedelic. It was a conference, for many there, to celebrate the beauty of destruction and the subsequent reformation that must occur.

Posted by Joel Kuennen on 11/14/11
Tags: glitch digital
RELATED ARTICLES
COMMENTS (0)
ArtSlant has shutdown. The website is currently running in a view-only mode to allow archiving of the content.