Last weekend was the second iteration of the MDW Fair, an independent visual arts fair located at the Geolofts building in the industrial district west of Bridgeport. Despite this being the second round for MDW, and only a few months after the first iteration, the fair’s legacy is about only seven months old and still in flux, so a quick history may be useful:

In early 2011, the city of Chicago was experiencing a particularly Chicago-style problem: its emerging, independent artists and galleries were being cut out of the art fairs, alternative and straight. Version Fest’s NFO XPO couldn’t take the refugees, as it was too politically left, and perhaps perceived as career-endingly DIY to some emerging artists, whereas Art Chicago couldn’t or wouldn’t price their spaces low enough for adoption by independent spaces or small galleries. While visual art fairs in Chicago have had a long and sordid history (usually told with deep sighs on either end), they have served as valuable gathering sites in a city where visual art culture is remarkably fragmented by geography, institutions, and access. With dozens of local art groups opting out of Art Chicago, a new alternative had to be found.

Through e-mails and rushed meetings came MDW (originally Midway Independent Art Fair), an experimental revision of the shape and role of an art fair.  MDW is produced by a few of the city’s most ambitious organizers: the Public Media Institute (Ed Marzewski and Aron Gent), Threewalls (director Shannon Stratton), and Roots & Culture (director Eric May). The speed of this group’s deployment was incredibly rapid, racing from concept to an announcement, to proposals, to an opening about three weeks later. With square footage for booths at bargain prices, MDW was priced to move fast. 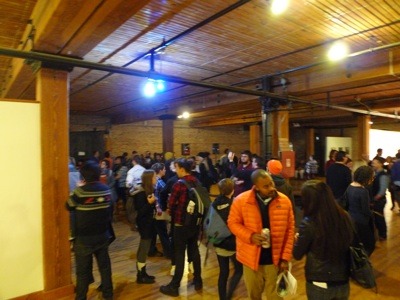 As a place of gathering, MDW was a major success. Everyone showed up, everyone seemed to be participating in one or more of the booths (myself included), and though few sales were made, the event launched a number of outside projects and productive collaborations. While its aesthetics were mixed, the sharp spaces and rough edges reflected the way things are normally done in Chicago each weekend, where the city’s best art might occur in a basement gallery paradoxically manicured on only two walls. The fair also reflected the city’s middle reality; namely, that our community is composed of a range of spaces, collectives, galleries, and studios, none of which are operating in opposition to one another. New loft spaces sell work and adopt a clean image despite being unincorporated; established storefront spaces still invite students to the after-parties and put on experimental exhibitions. Whatever this artist-run community is independent from, or whatever it presents an alternative to, it isn’t necessarily within Chicago.

But that was all the way back in the spring.

This fall’s fair was different, less about showing Chicago to itself, and more about learning from what we’re doing, and building on what we’ve done. This second MDW is the result of a Threewalls conference, titled Hand in Glove, which would focus on organizing alternative art communities, making them practical and sustainable, without threatening their essential independence. These academic and critical pursuits seemed to demand proximity to the subject of their discussion, especially as many of the speakers and attendees were artists themselves, so integrating a second MDW fair was the natural, albeit impromptu, choice.

The group at Hand in Glove was distinctly non-local, however, with intercontinental visitors and historic presenters (Courtney Fink of Southern Exposure, Nato Thompson of Creative Time, and Martha Wilson of Franklin Furnace to name only a few) describing their motivations, experiences, and technologies for building communities of artists. The fair was also expanded, both in the number of participants and the variety of hometowns represented. Milwaukee in particular showed up strong, with Small Space hosting hunts for spaces of social potential in the industrial districts surrounding the Geolofts; both naBr’s video by Phyllis Baldino and the Green Gallery’s first in the curious “Lunch Box” series were stand-outs, sharing an ad-hoc appreciation for built installations as installation spaces. Maryland’s Nudashank took its odd corner space and ran with it, giving an added appeal to works from Tracy Thomason and Bettina Yung. 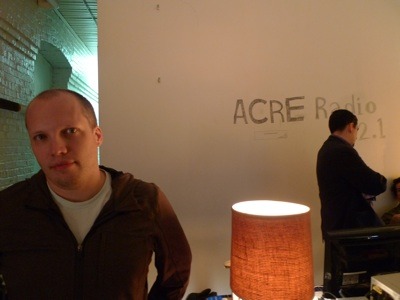 Chicago spaces were broad and overall very good, with Jno Cook’s kinetic sculptures, Brian Kapernekas at the 65GRAND’s space, Sara Mosk’s collages, ACRE’s endlessly crowded booth, Industry of the Ordinary’s Whiskey and Kisses, and many others. Along with fixing earlier issues with ancillary services, such as opening more bathrooms, having more volunteers and event staff, and providing crucial on-site food (via Eric May’s much enjoyed E-Dogz food truck), the fair’s organizers encouraged a healthier, more artist-focused event by requiring only solo or two-artist proposals from exhibitors. This subtle tweak was very effective, giving the MDW Fair a feeling of advocacy rather than exhibition, choices made on salience rather than diversity, expressing taste over marketability.

Overall, the second MDW Fair showed one of the best alternatives to a market-driven art community that I’ve seen, with arbitrary, conflicting, confusing, but universally constructive relationships forced out of interaction. During the Hand in Glove presentation on alternative funding models, speaker Jeff Hnilicka’s demonstration of the human mic caused a dog to bark at the back of the room, and also led an art space on another floor to turn up the bass.  The rest of the presentation had to fight bass bounce with volume, by Hnilicka adopting a louder voice and, perhaps incidentally, a more empassioned tone, just to get beyond the bassline. I wasn’t sure which I was nodding along to. Likewise, while hearing Lane Reylea and Martha Wilson describe the importance of artist-run spaces as alternatives to established cultural practices and institutions, and what it means to be an artist when art becomes political and these alternatives become the subject of cultural freedom or frenzy, I was increasingly amazed at the event’s organization.

More than just a fair, MDW is a consciously open and healthy site for developing and strengthening artist networks, making room for artists to exhibit, encourage, improve, and inspire each other, while also taking the bold contextual step of acknowledging that yes, visual art also happens to matter.

Posted by Steve Ruiz on 10/26/11
RELATED ARTICLES
COMMENTS (0)
ArtSlant has shutdown. The website is currently running in a view-only mode to allow archiving of the content.