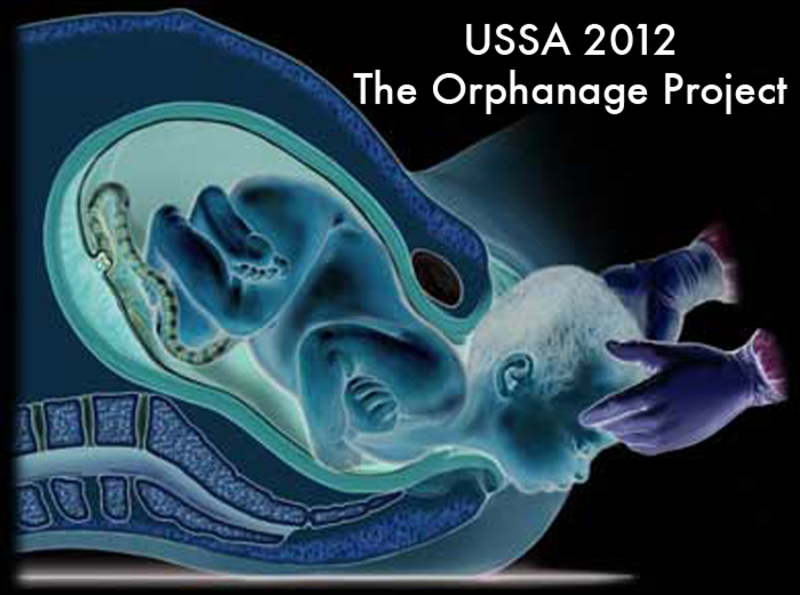 Orphaned by the Symbol

“Yeah USSA! Go Bears, Go!” Said artist, Zachary Cahill during his Artist’s Talk at threewalls last Thursday, the night that also coincidentally coincided with the beginning of Occupy Chicago. Both this exhibition and the gathering inspired by the Occupy Wall Street movement find their origins as orphans.

Ending its month-long run at threewalls this weekend, Zachary Cahill’s "USSA 2012: The Orphanage Project" is a working-through by an artist orphaned by the symbol. The anxiety produced by this disenchantment and inability to find authentic connection with the abstract societal bond that the symbol represents becomes the inspiration for the work in this exhibition. In “The Art of the Orphan,”  an essay by Joan Copjec that accompanies the exhibition materials, Copjec draws a similarity between the type of small-government rhetoric used to defund and delegitimize social welfare programs as an act of orphaning–the same orphaning invoked by Cahill. Naturally, this fragmentation in the flow of ontological communication extends to most instances of contemporary representation. The genre of work theorized and named by Nicolas Bourriaud, Relational Aesthetics, is too a consequence of the condition of the orphan. Cahill’s work tends to fall in and out of this aesthetic trope, preferring instead to sample and express the myriad reactions to a loss of genealogical meaning. 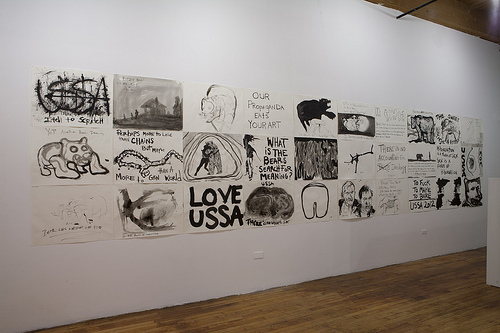 As one enters the third-floor loft gallery in Chicago’s West Loop, a large furry shape on a pedestal about shoulder-height draws one in. It’s like a  bear rug combined with a topographical map, crisscrossed with fishing line like Gulliver. In fact, Cahill took maps of the United States and the USSR and overlaid them to produce this map/rug of the USSA. On the adjacent wall, thirty ink drawings are tacked, three high, ten long. Beginning with a D.W. Winnicott reference to the teddy bear, a childhood symbol of protection as pointed out by the artist, these Rorschach-like ink drawings extend through the connotations surrounding the bear in popular symbology. They are desire, frustration and the visceral in Gestalt. This leads into a second room with four large sculptural works.

Making a diagonal swipe in large powder pink block letters “USSA” dominates the room and elucidates a trajectory between the other three sculptures present. It has all the gravitas of a country name printed over a pastel shape on a map. 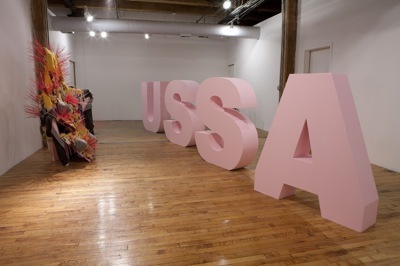 The other sculptures that inhabit this space are heavily drenched in their materiality, literally weighed down by a preponderance of anxiety with the material at hand and the need, for the artist, to represent the USSA. The sculpture represented to the left in the above image, makes use of bags of dirt hung from a bear-like monolith. This gesture grounds the work like ballasts on a hot air balloon while the neon metal spikes that jut from the monument’s figure extend it outward and upward. The effect is a representation of the tension inherent in the creation of a new symbology; one that attempts to form new currents of signification.

A third sculpture sits behind museum-like velvet rope stanchions, but makes use of found and thriftily accrued materials (a tripod retains its garage sale sticker). The head of a bear made from chicken wire rests on a wooden slat box. “It’s not that simple” is written on the front. The symbol, the artist seems to say, is not made meaningful through an outside declaration (the museum stanchions) but a configuration other than the one which exists. 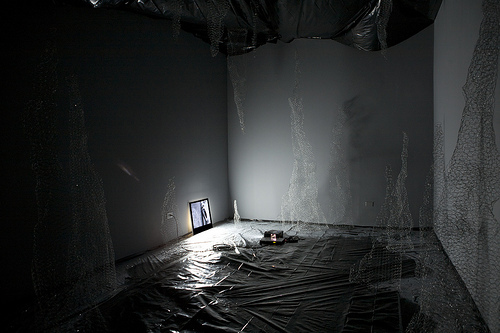 The final piece in this show is tucked away in a “cave,” threewalls’ completely blacked-out A/V gallery. Inspired by Werner Herzog’s Cave of Forgotten Dreams (2010), Cahill constructed an interior of the orphan. The cave is edged by glitter and punctuated by stalagmites and stalactites. In the far corner is a projection (calling forth Plato) of a face pressed against concrete, slowly opening and closing its mouth, trying to consume something, to bring something into its beglittered interior.

In Copjec’s essay, she makes the distinction between the type of orphaning that preoccupied Enlightenment thinkers and the figure of the orphan now: “the enlightenment was spellbound by such figures precisely because they were so radically innocent, so unrelated to any other human existence. In the end the orphan was for them the figure of relation, between the inanimate and the animate, nature and culture. Contemporary conservatives are fixated, rather, on the orphan’s orphaning; its uprooting.”

Cahill refocuses on the relationship between the orphan and meaningful existence, dismissing its uprooting as an assumed precondition. As Copjec points out: “One cannot annihilate what one cannot access. One can only create something new from it.” Cahill’s symbology of the bear practices this with an exciting execution of neosymbolism. The Occupy movement, on the other hand, goes wanting for an actionable expression of their anxiety and frustration.

Posted by Joel Kuennen on 10/10/11
RELATED ARTICLES
COMMENTS (0)
ArtSlant has shutdown. The website is currently running in a view-only mode to allow archiving of the content.