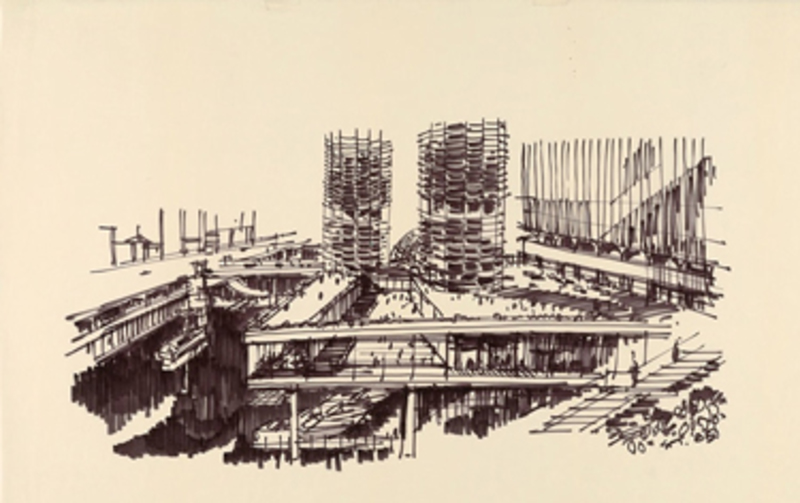 Aptly timed, the Art Institute of Chicago’s “Bertrand Goldberg: The Architecture of Invention” aligns with the current fight to save one of the architect’s masterworks from demolition, Northwestern University’s Prentice Women’s Hospital, an issue that has been gaining attention nationally as part of a larger discussion on modernist architecture and its preservation. Goldberg’s first comprehensive retrospective, curated by Zoë Ryan and Alison Fisher, focuses on Marina Towers as a high point in his long career with archival materials from its construction and from other progressive projects, realized and unrealized, as well as his work with furniture, costume, and industrial design.

“An eggshell is more efficient than a tree,” Golberg once said, and appropriately a faux-concrete half-cylinder that opens the show introduces his signature tube-and-shell structures, a clear rejection of Miesian post-and-lintel ideals. Mirrors surround the doorways between galleries, causing a bit of a funhouse effect that didn’t distract me so much as make me curious as to what connection, if any, they could have with his architecture. Instead of diving into the history of Marina Towers with sketches, drawings and plans, and working backwards to Goldberg’s training at the Bauhaus in Germany under Josef Albers, the show might have worked better chronologically for those new to Goldberg's work. By the end, though, visitors will easily understand that studies of circles and hive structures were in Goldberg’s mind for much of his life, and influences like the streamlined, modern designs in Chicago’s 1933 Century of Progress Exposition also help make sense of his organic aesthetic.

The exhibit charts this period with large drawings and plans with occasional photos of the buildings that were commissioned and remain in situ. The democratic concepts within Goldberg’s later designs, shown in his dynamic original drawings that use colorful markers to emphasize lines and spaces, are the most directly pertinent, engaging part of the exhibit. 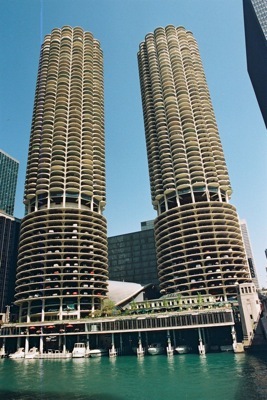 Today, a wedge-shaped apartment in Marina City, completed in 1964, is high dollar real estate, but the set of buildings were envisioned from a request by labor leader William McFetridge asking to create a mixed-use structure that synthesized his union’s headquarters, commercial facilities, and housing for office workers. The “city within a city” was an ambitious feat of urban development, and it sought to revitalize the still-industrial riverfront area while luring those that commuted from the suburbs into an city life with spaces for living, entertaining, working, and parking their cars.

The engineering behind the geocentric structures was documented in “This is Marina City” (1965), playing on a screen in the exhibit, and the futuristic, corncob-shaped towers are now undisputed icons of Chicago architecture. Like many others of my generation, I remember falling in love with their elegant strangeness when I purchased Wilco’s 2002 album Yankee Hotel Foxtrot on compact disc—there’s some nostalgia for you. Considered one of the best album covers of the last decade, the images supports the towers as utterly unique, looking as though they dropped out of some never-arrived "Jetsons"-like future. Between the brooding Sears and Hancock towers that flank Chicago's skyline, they radiate a playfulness rarely found in skyscrapers from the later half of the 20th century.

Goldberg moved towards a more utopian urban center with his schemas for River City, just south of the Loop. Only portions of the snake-like tower series were completed in the 1980s, leaving us wondering what could have been. Within the context of Chicago’s uneasy history of low-cost tenements, this area of the exhibit, and the portion dedicated to his passion for healthcare facilities, demonstrate not only his abilities with innovative designs, but also a genuine care for social issues and human rights.

Succeeding the notable Health Science City at the State University of New York, in Stony Brook, Chicago’s Prentice Hospital, completed in 1975, was the ultimate realization of his hospital modes. Patient rooms were organized into clusters or “villages” to enhance feelings of comfort, with care given to the relationships of space and scale to the human body, and spawned other projects around the world. Without overtly naming its politics, the exhibit assures Prentice’s cultural and artistic importance. 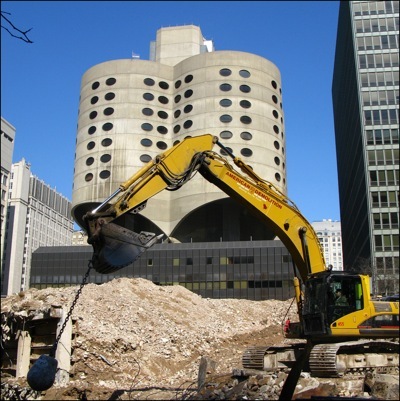 Prentice is at  the center of a struggle happening in real-time,  and “The Architecture of Invention” is a strong part of the argument that will hopefully ensure its place as a protected, historic landmark. The building has been mostly vacant since 2007, when a new women’s health center was completed. Expanses of cold concrete and the relatively small, ovular windows have made the support of it, and other endangered Brutalist buildings, an acquired taste rather than a popular cause. However, institutions in the city seem to be banding together to make a statement with exhibitions and actions revolving around the Save Prentice project, where you can sign a petition and buy a t-shirt that says “I was born at ‘old’ Prentice.” “Inside Marina City: A Project by Iker Gil and Andreas E.G. Larsson”  is also on view at Art Institute, and the Arts Club of Chicago has the architect’s personal objects and drawings on display in “Bertrand Goldberg: Reflections.”

Posted by Mia DiMeo on 10/10/11
RELATED ARTICLES
COMMENTS (0)
ArtSlant has shutdown. The website is currently running in a view-only mode to allow archiving of the content.