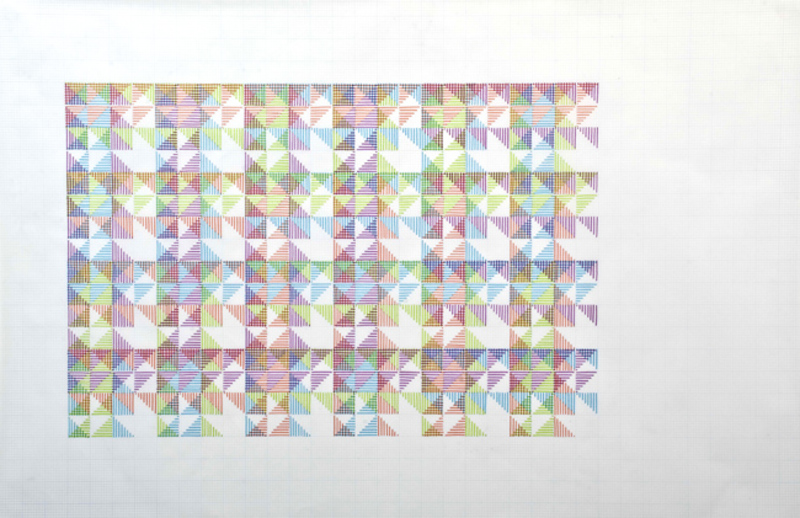 Minimal and post-minimal painting has had something of a resurgence in the last few years. Many of Chicago’s artists are participating in it from various angles, enough that an exhibition was inevitable. I had been anticipating threewalls’ “Either/Or/Both” as a look at the those artists working between hand-made and automatic production. The exhibition provided a solid variety of these works demonstrating the spaces between geometry and intuition, pattern and expression, and planning and execution.

The relationship between grid pattern, fabric work, and painting craft was first articulated to me in Chicago by the work of Michelle Grabner, whose many tondo paintings drive a connection between the domestic, traditional, female sphere of fabric craft (darning, knitting, sewing) and the emergent aesthetics of serial or minimalist painting. While this kind of working produces amazing and extremely intriguing artworks, the decision-making role of the artist is relegated to the initial period, where artistic algorithms are developed and methods are chosen, followed by a production period of execution with as few deviations from the initial plan as possible. While these paintings are infinitely reconfigurable and consistently impressive, they lack a painting’s attractive potential as the result of constant and sometimes conflicting aesthetic decisions. Like John Horton Conway’s Game of Life, these are ideally zero-player games, artfully compiled bits of painterly code that would spin Kandinsky in his grave.

The post-minimalist painters in “Either/Or/Both,” in which I would include  Hans Peter Sundquist and Samantha Bittman, integrate either the aesthetic or the craft of fabric (or, in Bittman’s case, both) with painterly interruptions that are clearly intuitive, personally aesthetic, and chosen in the moment of execution. The sense that these decisions lack corners against the logic of their fabric supports, demonstrating a different kind of human presence before and during creation. Michael Milano’s drawings leaned more toward obedience to the grid, reminiscent of Eva Hesse’s grid drawings, though they were surprisingly complex in their layers.

The apparently later decision to include Stephanie Brooks and Casey Droege added a little text-based variety of artwork, and confusion, to the exhibition’s thesis. Brooks’ small prints showed the four quarters of a X-Y coordinate grid as arbitrary when applied to sentimental terms, suggesting an emotional complexity which would need a few extra dimensions to model. Droege’s paper decision flowers, crammed into a glass cube, and Brooks' floor-set sculptural phrases spoke romance in the cold language of minimalism. These, like all of the works in "Either/Or/Both," maintained the impossibility of removing the personal from art, no matter how specific its objects.

Posted by Steve Ruiz on 7/4/11
Tags: fabric painting
RELATED ARTICLES
COMMENTS (0)
ArtSlant has shutdown. The website is currently running in a view-only mode to allow archiving of the content.