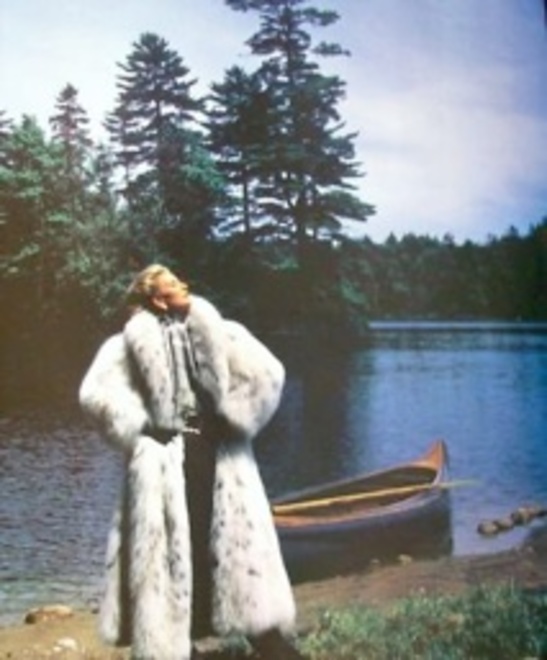 In a redeveloped loft, far out on Lake Street, past the Garfield Conservatory and amidst islands of empty lots and padlocked warehouses, a small group of artists run ADDS DONNA. This six-person collective shares studio spaces, runs reading groups and operates a gallery. Coming to an end July 10th, “HIDE” is a two-person show from Brooklyn-based artists Leeza Meksin and Yevgeniya Baras. 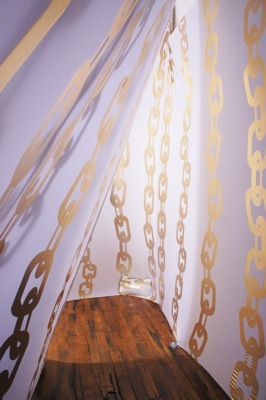 “HIDE” consists mostly of paintings but is dominated by Meksin’s large installation of the same name that covers the far end of the gallery in a white spandex sheet printed with golden chains. The sheet is anchored to the wall and held down by sandbags and ropes in a clear homage to Christo and Jeanne-Claude’s earlier work. Within its folds, Meksin’s painting VG hides. 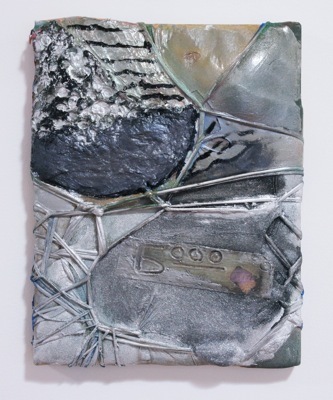 Spandex, as opposed to Christo and Jeanne-Claude’s use of draping and folds, allows Meksin to stretch and pull, giving her installation work a sheer, almost web-like appearance. For her painting NG, she has strung and tied spandex cord like a shibari master to create planes of tension on the canvas. The silver coating only seems to accentuate the stress contained within the work itself, communicating a feeling of just-about-to-burst.

All of Meksin’s paintings in “HIDE” are done on stretched spandex canvases. Her palette manipulates pop colors: bright metallics, neons and pastels. The artist incorporates foam and polymers to give the canvas a bodily appearance, reminiscent of knee-folds and soft protrusions that have been poked and prodded by the artist. One of these paintings, HD, shows finger indentations that seem to have penetrated the body of the canvas and caused it to bleed rainbows.

Meksin’s paintings become examples of what Georges Bataille called “base materiality” in his analysis of the surrealist’s approach to art making as a subversive act, through its use of affect that deflates the potential of symbolic ideologies. Stripped of the sign, Meksin’s paintings’ relationship to the viewer becomes visceral, tactile, without ideology. 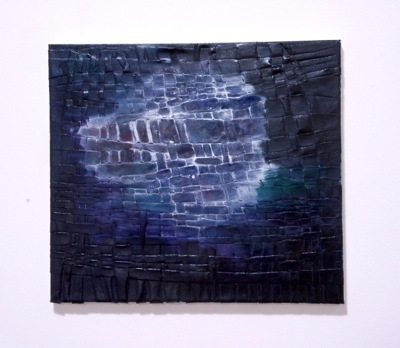 Yevgeniya Baras’ work deals with materiality as well, but approaches spatiality in a painterly fashion, devising planes through thick applications of paint, as well as canvas manipulations that include sewing, weaving and gouging. One piece in particular that is strung from top to bottom in dark blue yarn retains the essence of a portrait through deft underpainting.

The materiality of Baras’ paintings exhibits a darker, rougher more rigid message when compared to Meksin. While the emotive content of Meksin’s work could easily be read as an obsession with the flash of appearance, Baras digs deep and constructs paintings that jeer instead of cajole.

In this exhibition, the viewer is drawn from the flash of façade, to the hard and rough-but-intricate emotive depths that lie behind the spandex. The extremes of these two painter’s work are what ultimately make this show work. Without the other, the materiality of affect would be absent.

Posted by Joel Kuennen on 7/4/11
RELATED ARTICLES
COMMENTS (0)
ArtSlant has shutdown. The website is currently running in a view-only mode to allow archiving of the content.