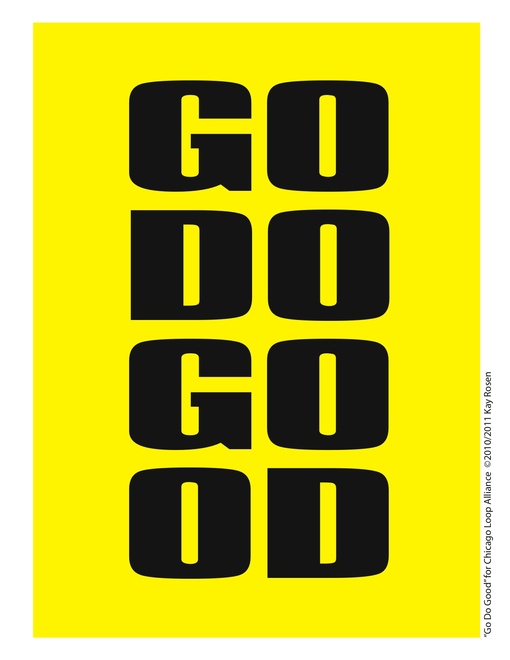 If you thought it couldn’t get worse than Tony Tasset’s giant fiberglass eyeball and cardinal banners last summer, then you were unpleasantly surprised by the unveiling of the latest public work of art commissioned by Chicago Loop Alliance. At least Tasset’s EYE was ridiculous and fun; it was a discrete work of art and was specifically commissioned as such. Kay Rosen’s project GO DO GOOD is an “inspirational” six-story mural tucked away above and behind the Old Navy at the corner of State and Washington.

In addition to the mural, part of the project’s concept is to actually motivate people to execute one hundred thousand good deeds by summer’s end. Despite its size, similar banners on every light post along with decals on subway entrances and the State and Lake L stop platform steal the attention and manage to block the views. One thing I liked about Tasset’s cardinal banners hanging from the lampposts last summer was the complete lack of text and advertising design. They were just sequential images showing a cardinal flying past, like frames in an animation. Sometimes they were almost entirely sky blue, save for a little bit of red feather. Rosen has installed banners also; two to a pole flanking each side, reading vertically GO/DO and GOOD, respectively. As opposed to the large mural itself, the vertical, two-letter format of which forces a reading: GO/DO/GO/OD. 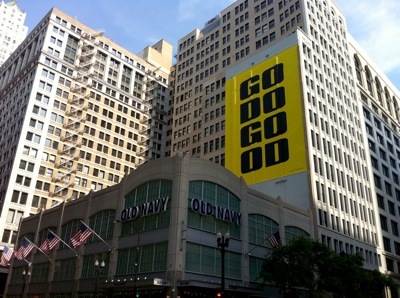 My problem is not with the mural itself. The mural is classic Rosen, striking in its bold, black, all capital letters on a bright yellow field. It stands out amongst the thoroughly middleclass shopping along State Street although the banners and accompanying material deaden that effect.

My problem is that Rosen’s artwork is being used as marketing, an issue I’ve had before. And in that capacity it’s not very good. It’s a little confusing, like a conversation during the noise of rush hour, “Did you say, ‘GODO GOOD?’” “NO, I SAID, ‘GO DO GO OD!’” 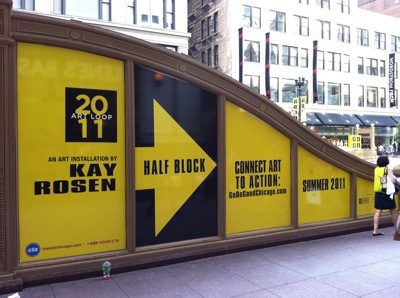 With this year’s project, the Chicago Loop Alliance (CLA) is brazenly wielding the idea of public art as a tool for responsible citizenship. To read the pull quotes from the CLA and United Way executives, parroted on the godogood.com website, or vice versa, is to hear whose project it really is. Like the way Pop Up Art Loop uses art to show off real estate, GO DO GOOD encourages consumption that simultaneously profits business while donating to charity: Text “DOGOOD” and donate $10; go to a specific bank branch and open a checking account and they’ll donate $25; buy a ticket to the Air and Water Show Yacht Party and $10 will be donated; buy tickets to Blues Brothers™at the Auditorium Theatre using code “GOOD” and $5 will be donated.

I am not a huge fan of her art, but I love what Marlene Dumas has said, “Art doesn’t point fingers or serve a greater good.” I think art can do those things, but it is not a specific mandate. I am sick and tired of art, particularly in Chicago, being delegated to promoting fun (Tasset’s eyeball) or community engagement (GO DO GOOD). I am not saying art shouldn’t do these things, but I find it highly problematic when beyond seeking such ends within itself, it is externally forcing others to do so. It is also a problem when this kind of social activity becomes more privileged above all others. 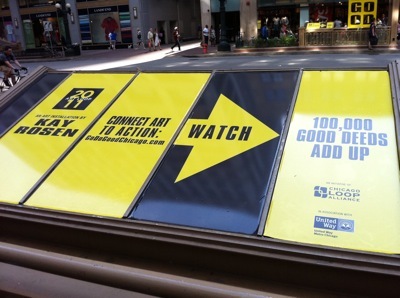 We know that politically and economically the current trend is toward austerity. In order for corporations to maintain and increase their profits–for them the “Great Recession” is over– they are passing their operating costs on to the average consumer for everything from entertainment to necessities while forcing their employees to face pay cuts, furloughs and layoffs. Equally, governments are passing the pain of balancing their budgets onto citizens through cuts to social services, public transportation and other “amenities” while these same officials enjoy their taxpayer-funded health insurance and self-approved pay raises to cover the increasing cost of living. At the same time governments and corporations are pushing their constituents and customers to be socially responsible, as if the person on the street is the one laying communities to waste.

This is where art comes in. While some artists make their projects going into abandoned communities and providing voluntary education for children left without any interesting activities at school, or starting urban gardens in neighborhood food deserts, it now seems like this is an expectation of art and artists. There is a driving force toward this kind of involvement from the mainstream and local media along with public funding. I’m not saying it is bad, but I refuse to accept this as the primary responsibility of art or that it is the artist’s job to fill in for failing social infrastructures, no questions asked.

In the case of GO DO GOOD, the artwork is really just a brand identity used to spread a meme. Rosen describes the process as “seeing” the mural as an abstract image, (which I think is impossible. Even if you can’t immediately decipher it, you automatically recognize letters) followed by “reading” the message and then finally “performing” the action of a good deed. (Is she dabbling in Relational Aesthetics?) It’s hard to know where Rosen’s art ends and the larger campaign begins. The goal stated on the website is to focus on preparing Chicago’s children for school and helping them “graduate, contribute to our workforce, support their future families, maintain their health and, ultimately, build stronger communities.” It’s hard to be critical of that, right? Which seems to be the case with most of what’s been written about the project, mainly just repeating the talking points and promoting a human-interest story. If no one is critically engaging it, you might have a successful public works campaign, but a failed artwork. 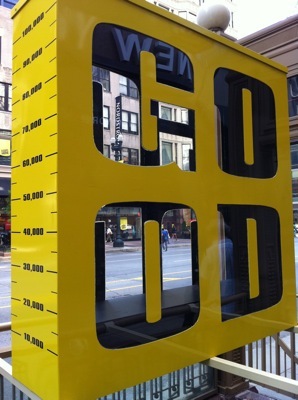 GO DO GOOD has is a fine goal, albeit totally generic. That’s the other problem with this whole enterprise: it’s so bland. It’s got a blah slogan that’s hard to read with a design that is striking as a singular mural, but bland as a repeated graphic, and boring, moralizing tie-ins, like the transparent boxes on State Street that say “GO/OD.” As people report the good things they’ve done via Facebook and Twitter the boxes will be filled incrementally,  like mercury in a thermometer.  It touches on all the things a proper 2010s publicity campaign should, but without imagination. In that way it’s typically Midwestern: simple, nice and composed of the three letters that spell “God.” It’s like (PRODUCT)RED but with diminished expectations and the color yellow. 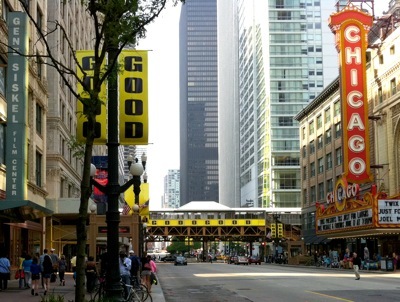 The more one analyzes it, the more it feels like an incredibly cynical and phony gesture, like putting a showy band-aid on the chronic tragedy haunting our city. The whole campaign feels like you, as the viewer and  receiver of the message, are being talked down to. Not just literally since all the mural, banners and signs speak at you from overhead, but in the language and design. In all capitals and in caution tape-style black and yellow, you are not asked or encouraged, but commanded to GO DO GOOD. It seems like a peek at the future where the totalitarian leanings of capitalism and communism have merged and average people are required to be good citizens that spend money and volunteer to serve the greater good of the economy and the nation.

GO DO GOOD is not so much an artwork; it’s an initiative, which is to say it’s a marketing campaign. It seems like it might have been more effective if the money spent on promoting this campaign just went directly to public schools and community centers, but what good is doing a good deed if no one knows you’re a do-gooder?

Tranquillity in the Midst of the Circus: The Frieze Sculpture Park Group Exhibition
10/15/13

Immigrants' Fight: Ruben Ubiera's #IamHere Mural Unveiled
6/4/13
COMMENTS (5)
While I appreciate the art / design conflict in Rosen's work, I don't think its very useful here. Rosen's work has always been both art and design, only differentiated from every other design by its specific audience - the gallery or museum attendee - and motivated according to that audience. By putting it on banners and street signs, often near actual pieces of design by designers which are nearly indistinguishable from the original, Rosen's work doesn't become more design and less art, just less interesting. To flip the dimensions, this isn't too much different than if Kara Walker brought her signature large-scale mural aesthetic to HarperCollins and published an actual children's book for children. I agree with Erik though - I'm not bothered by the project or by Rosen's work (which I like quite a bit), but by the total uh licensing of the artist here. Then again, I feel a little like one of the Jurassic Park bioengineers griping about the lunchboxes.
Comment by: Steve Ruiz on Tuesday 06/21/11 at 9:42 AM
The Question Remains
The question remains, " Is it art or is it design?". Or is it the Art of Design? Maybe it is bad design so we will call it art. As art it got your attention; and maybe that makes it good if that is what is intended.
Comment by: DovBer Marchette on Tuesday 06/21/11 at 8:07 AM
I can't get past the typeface
My biggest problem with this whole thing is with the typeface that was chosen. The "O" is practically identical to the "D" which means that for most people i've talked to who they're not even sure that it actually says "Go do good." If the whole thing is supposed to be some call to action, it would help if we could read it. I work on state street and see it every day and shake my head.
Comment by: The Grocer on Tuesday 06/21/11 at 7:40 AM
Well then:
Well then; it is advertising and the graphic designer artist usually gets paid for the work. The question remains, " Is it art or is it design?". Or is it the Art of Design?
Comment by: DovBer Marchette on Tuesday 06/21/11 at 4:31 AM
Agreed
One thing not mentioned here is that Rosen was (I assume) well compensated for her work. My opinion is that this strategy of promoting commerce with visual art is far less dubious when participating artists can get a cut.
Comment by: John.Eding on Tuesday 06/21/11 at 1:12 AM
ArtSlant has shutdown. The website is currently running in a view-only mode to allow archiving of the content.