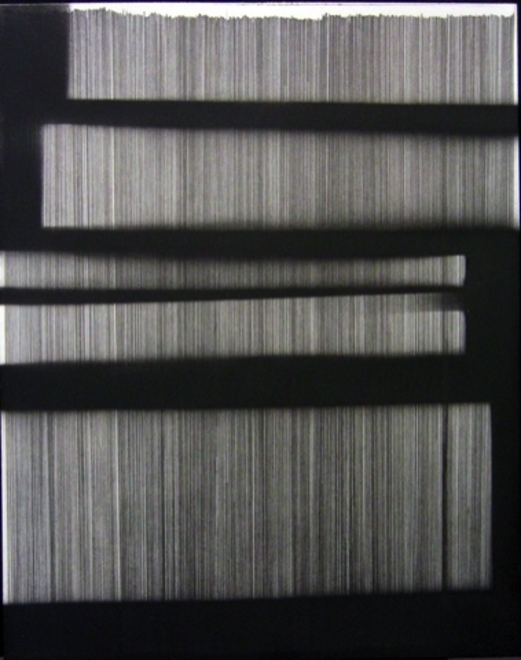 Matt Stolle’s suite of large OCE laser prints on thin photocopy paper is perfectly paired with John Opera’s photography at Andrew Rafacz Gallery. A series of black rectangles, seen in perspective, float in whiteness, visible are the dots and dust indicating they are sourced from old printed pictures that have been enlarged and obliterated by heavily increased contrast. Their black frames shut down the large white expanses of the paper, keeping them from bleeding out onto the walls. This makes them a group of discrete objects, pictures of rectangles that are literally rectangles. They could be windows or doors, but it becomes clear that they are derived from installation shots of paintings, probably taken in the 1960s. I am most drawn to the idea of these as anonymous works, barely recognizable as paintings, save for their shape, size, and hint of cast shadow rendered in messy dots.

It is, therefore, somewhat disappointing to learn that Stolle’s prints are derived from period photographs taken of Ad Reinhardt paintings, something only revealed in the press release. One has to be careful when bringing up Ad Reinhardt and his “black” paintings, lest the result is some sort of joking connection to heavy metal in a complacent work of art about being a suburban kid in the early 80s. Thankfully Stolle does not do this, however I think that the source for these prints being Reinhardt is cause for some reservation, but is also intriguing.

The problem is that Stolle’s pieces are so solidly grounded on postmodern—maybe even post-postmodern—academic conventions of referring directly to art history, appropriating reproduction and producing work from the impotent state of living at “the end of art.” It’s important to address the literalness of this act of which these pieces are in danger of falling into. Artists grab an image, usually a historic photo from a book and literally use the image, they do not incorporate the artist into their own work. There is some filtration, scanning, enlarging, Photoshopping or in many cases drawing with graphite, as if this somehow art-ifies it. This does no good. It is a very tempting system or strategy, but it leads to the danger of formula and repetition and it implies no real learning or understanding has taken place. Ad Reinhardt and his ultimate paintings or the “last paintings that can be made” is a weighty, precarious subject to tackle, but one of valid investigation.

It is not specified whether or not the sourced images are of Reinhardt’s “black” paintings. In his 1992 essay on the artist, Yve-Alain Bois points out that his, “late paintings are always almost black,” and should always be referred to as “black” in quotations since they aren’t really black. The colors are very close but the paintings are made up of separate squares of dark hues, not a uniform black, one fact often overlooked. In this sense Stolle’s pieces could be seen as a comment on the misunderstanding of Reinhart, the way his work has been cast as empty meaningless black squares and quickly walked by. The very opposite of how they work. Bois continues, “for the beholder of a ‘black’ canvas, there are only two choices: either one rushes by and sees nothing, or one spends a few minutes (1958), a quarter of an hour (1960), half an hour (1967) in front of each canvas.” The years refer to the points during the final phase of Reinhardt’s career. From 1954 his death in 1967 he made “black” paintings. From 1960 – 67 these paintings were specifically the 5 x 5 foot square. So evidently, we can be at least sure that not all the images in Stolle’s prints derive from the final phase since some of the images are not of perfect squares.

Following on the inherent not-blackness of Reinhardt’s paintings versus the blackness commonly attributed to them, is the manner in which the fallibility of the printer is foregrounded in Stolle’s works. In vast expanses of black, we see the inks faltering and colors are subtly visible, as well as the lines in which the print head swept across the sheet. A compatriot in this practice would be Wade Guyton and his “ostensible black monochromes” made by feeding canvas through printers. But where Guyton coaxes and encourages this break down in the printing method by stuffing a surface not meant to be printed on through the machine, Stolle comes about it simply as a natural result of printing a large area of black ink on a large sheet of paper. This is a literal aspect of the break down in representation these prints deal with. First a black and white photo of a work of art, especially a Reinhardt, is fundamentally flawed, then in the copying and enlarging all the imperfections of photography become evident, the dusts spots, the dirt, the dots from printing, and finally the way printers today still misrepresent.

Ultimately Stolle’s pieces are troubled, but work and succeed as art. Perhaps it is best to end with some words of encouragement from Reinhardt himself [quoted by Bois]: “One of his last statements reads: ‘If I were to say I am making the last paintings, I don’t mean that painting is dying. You go back to the beginning all the time anyway.’”

Posted by Erik Wenzel on 10/6/08
RELATED ARTICLES
COMMENTS (0)
ArtSlant has shutdown. The website is currently running in a view-only mode to allow archiving of the content.