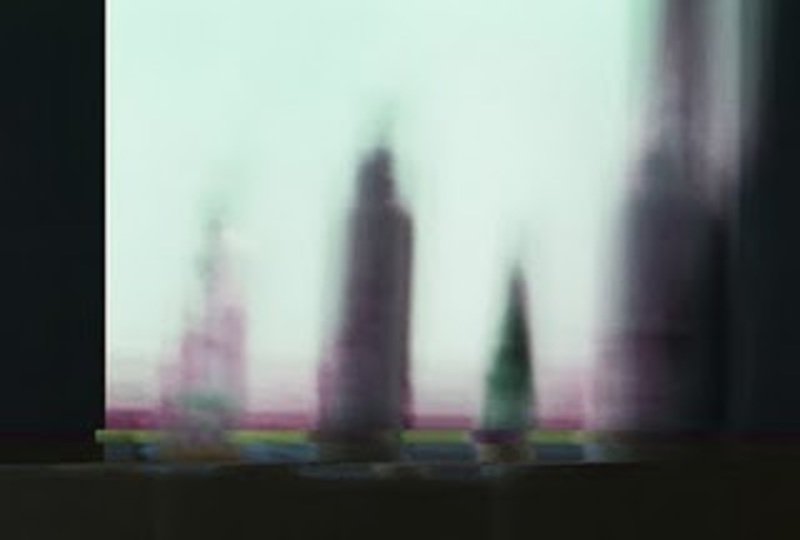 This past weekend, “Symptoms Variable” opened at Roxaboxen Exhibitions, an apartment gallery in Pilsen. The culminating show for the Master of Art in Visual and Critical Studies program at School of the Art Institute of Chicago (SAIC), “Symptoms Variable” serves as a clear window into the enigmatic discipline of Visual Studies, a discipline I, by way of disclosure, also hold a degree in from the SAIC. Visual and Critical Studies is not synonymous with Visual Studies, but rather incorporates the act of art-making as a tool in the critic’s belt. “Symptoms Variable” takes a tongue-in-cheek approach, serving as a meta-critique of body issues in general. The artists broke up each other’s work into three categories, designated by a corresponding made-up drug: Accumulofetishix™, Bodacept™ and Placebex™.

Artists working under the banner of Accumulofetishix™ seek to alleviate the “anxiety and alienation associated with . . . [a] multiplicity of images and objects.” They take on the most telling characteristic of modernity, the hypertrophic accumulation of material. Under this moniker, Jeremy Stephen Shedd’s Mega Sale is a series of digital collages, sourced from iStockphotos.com, and the sleek faux-brand No Thanks, elevating graphic satire to 4”x6’’ aesthetic objects. Christine Elliot’s work creates a pastiche of the past with gold-laden frames and a table of yearbook moniker pins. She urges you to take one and pin it on, to re-claim an identity. Any identity.

Lucy Parker contributed two installations, both of which can only be called digital paintings. The first, a series using tools from CorelDRAW and Adobe Photoshop, focused on the macro characteristics of these digital paintbrushes. The second utilized the out-dated Paint program to simply sketch out scenes from what appears to be the movie Slackers. The drawing is only part of the image though, as the digital palette, canvas and desktop remain part of the image, further highlighting the connection between the artist’s tools and the subsequent artifact. 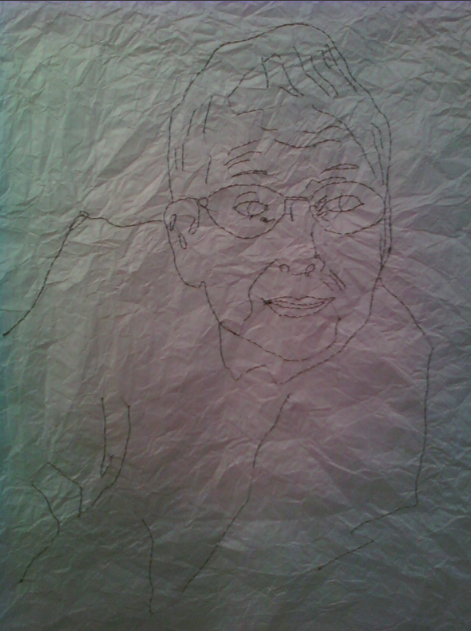 “Not feeling quite like yourself? Scatterbrained? A sense of confusion between the shards of your fractured body and mind? Bodacept™ helps heal this hard-to-define gap.” Lauren Ross stitched portraits of friends into Mulberry paper, a thin, skin-like paper that tears easily and wrinkles beautifully. The stitching belies a certainty about the images of the people but the paper is fragile, mutable and has been noticeably mangled in the process of creation to great effect. 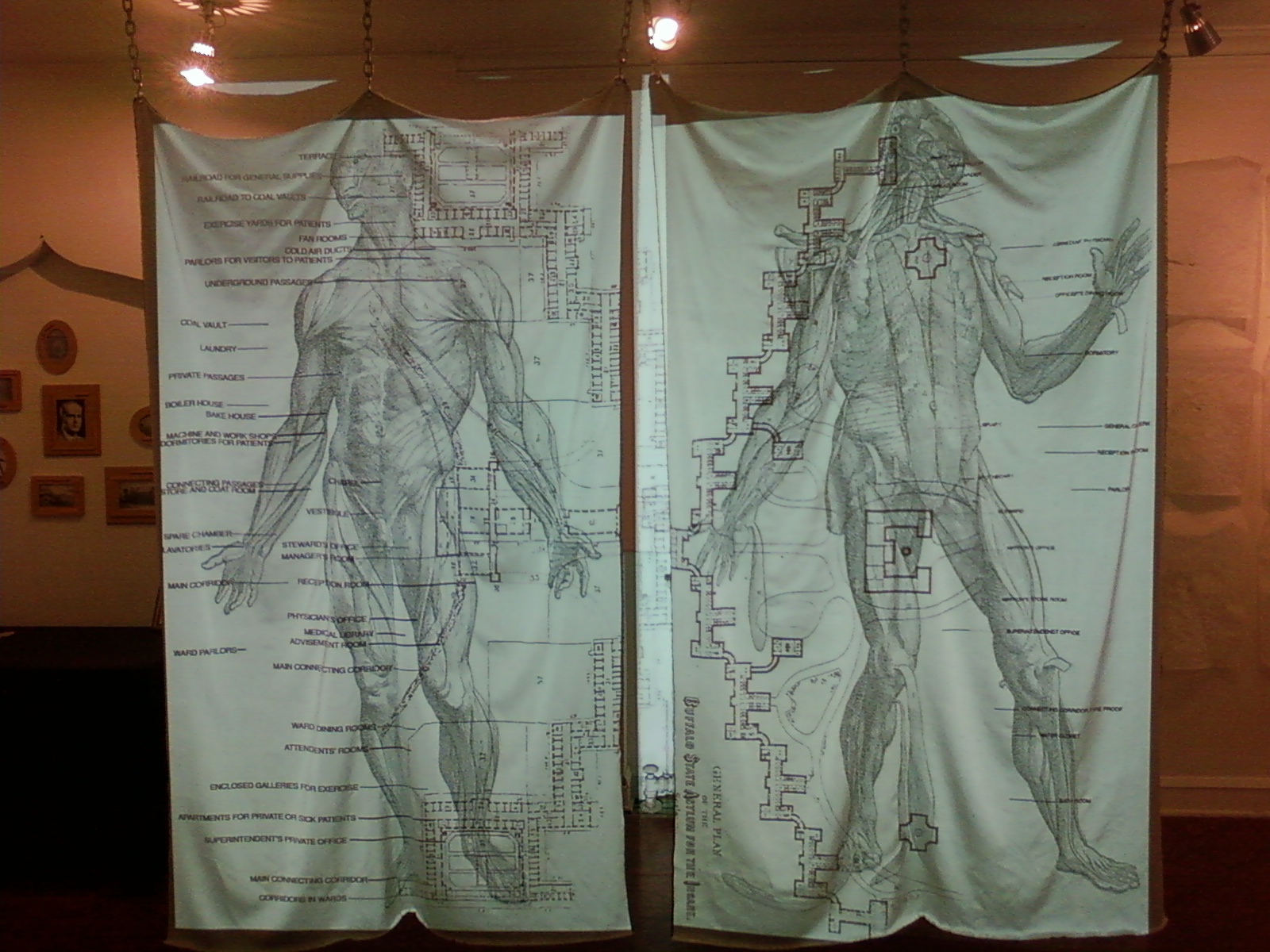 Sara Clugage’s Discipline Chart combines Jacquard weave tapestries of anatomical figures from the medical textbook Gray’s Anatomy with projections of the floor and grounds plans of insane asylums from the turn of the century; a comment, no doubt, on the use of mapping as an analytical tool to isolate and “treat” symptoms—or entire human beings. Meredith Kooi’s projection, one and one…make a hundred afflictions is a digital video projection onto a hot-water wall heater. The video is of a faint snow, falling through digital glitches, a collapsing of associations—the nostalgic into the new, the digital onto the out-dated.

For those “haunted by the ghostly sense of [their] own becoming,” Placebex™ may do the trick. T. Brandon Evans’ piece, Aporia, meets you at the door, two radio equipped headphones for your use. Interference immediately meets your ear, the familiar static of the radio but as you move through the gallery, you hear steps on gravel, faintly making their way through the static and Toyota commercials that crisscross the air of the gallery in overlapping radio waves. In the back corner, a long wooden box filled with gray gravel sits, inviting you to mimic the sound you hear, but I just wander like a diviner, seeking what waves through the air. 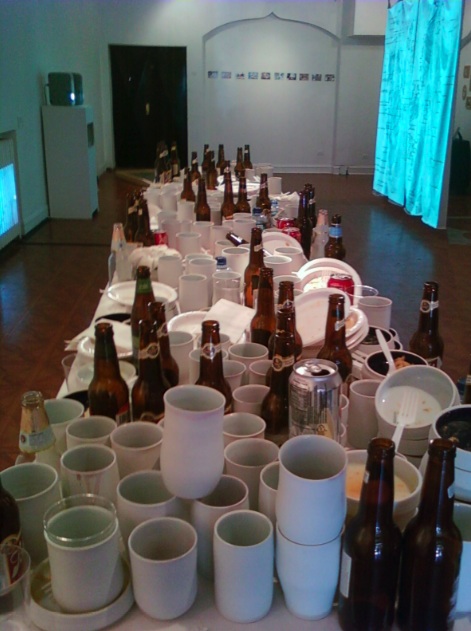 The first thing you may notice upon entering the gallery, however, is a long banquet table bedecked with wine-stained cups, saucers with a dried glaze of food, beer bottles weighted down by the last spittles, the yeasty ferment still wafting in the room. Meet Dustin Yager’s contribution, seen above. Made up of 100 handcrafted saucers and cups with the edict to leave what you use, this piece remains the topography of a celebration, a graduation into the world of art and criticism.

(Top image: Meredith Kooi. one and one... Video still, 2011. Image courtesy of the artist)