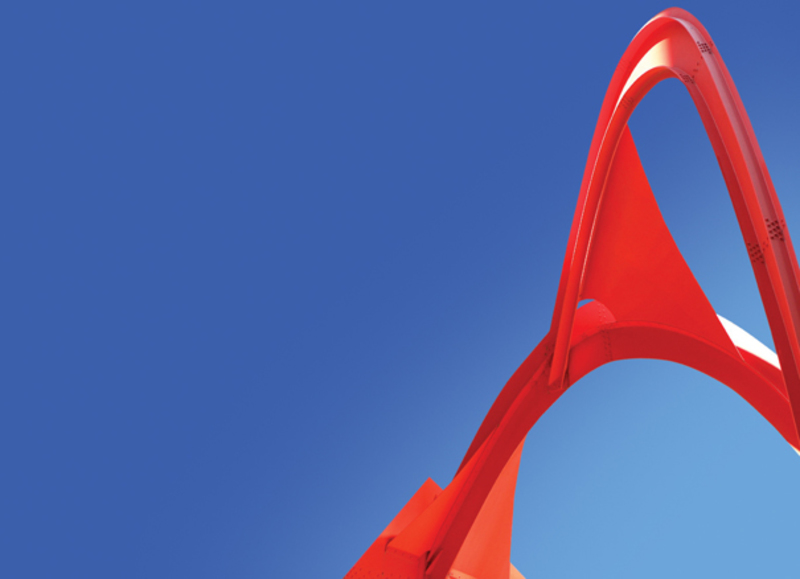 This year at Art Chicago, a couple of London galleries showed up with some amazing, non-Damien Hirst work. 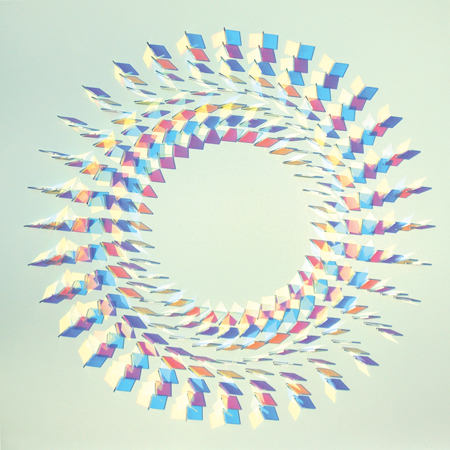 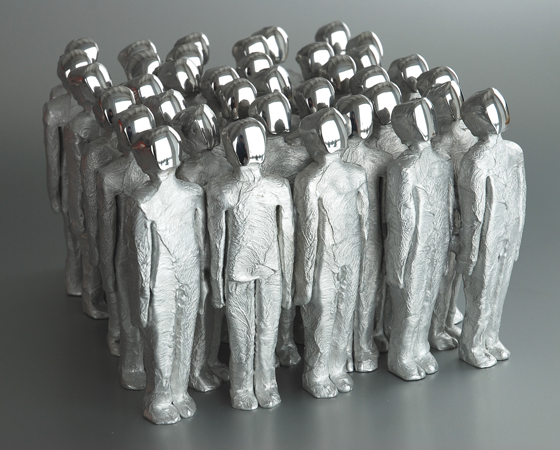 Seen above, Egli crafts “Hominium” figures of aluminum in his Swiss workshop.  They are individually distinct, yet all buffed with a mirror finish face that reflects the peering observer; striking provocative poses between dynamics of the group and the individual.

Weigl produces work common to boardrooms and five star hotels but does so with an easy style uncharacteristic of his chosen medium, concrete. His piece present at Art Chicago, A New Beginning, consisted of bone china figures reminiscent of deep-sea calcifications brought organically into a circle, fixed on black, opaque glass.

Chris Wood’s sculptures of dichroic glass shows an appreciation of light-as-medium that I thought only Olafur Eliasson could. Through playing with shadows and reflections, Wood’s sculptures attain a simple beauty, almost architectural in its precision. 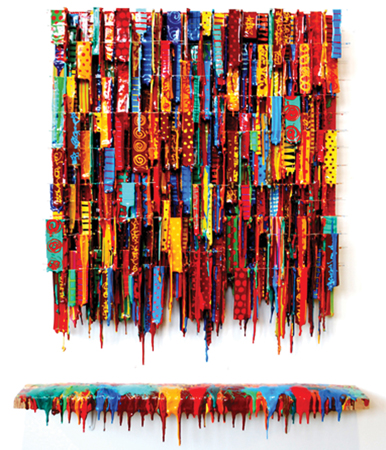 Russell West is a drip artist, allowing for gravity-powered colors to slowly envelop wire scaffoldings. Some of his paintings take up to a year to coat in glossy goodness. The delicate and vibrant paint droplets, frozen in suspension from thin wires, remind one of the fragility of diversity.

Woolff Gallery in London has got something behind it.

Of course you can never fully escape Damien Hirst at an art fair and indeed there were a few Hirst works lurking. His recent spin prints were about, as well as a few Psalm Prints (but not even the good ones!) at the Jill George Gallery.

Interestingly, there were a few Brit galleries that seemed to think the best art to sell to a megalomaniacal culture is the art that praises a nostalgic past—selling Americans their own Americana. One such artist, Alain Bertrand (actually French) of London’s Catto Gallery has succeeded in creating non-existent cityscapes that are anachronistic in their relentless nostalgia. His signature in the corner of the canvas is even done in the Ford Thunderbird font. Yikes. 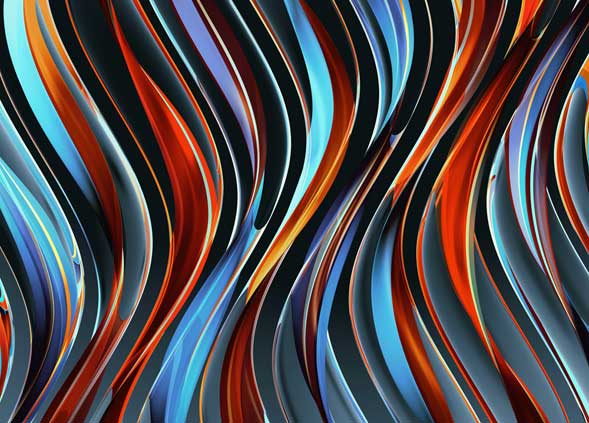 Also in Catto Gallery’s collection are a few digital Diasec prints by Chuck Elliott that transform the built-in "digital-y" desktop images that came with your laptop into fine art. I doubt this was the concept behind these works, but rather influenced by the smooth design of digitized abstraction. The rich color palette and digital execution are top-notch with these pieces, and again, they are destined for a boardroom.

Heading back to selling Americans Americana, donuts seem to be well represented by British galleries as well. W.H. Patterson gallery exhibited quite a few beautifully executed still life paintings by Paul S. Brown, originally from North Carolina, he’s a classical realist painter who has been represented by the gallery since 1995 and he has lived in the UK since 1994. His best still lifes consisted mostly of robots and donuts. Not in the same frame, although that would have been cool. Brown works in the traditional manner, mixing his own paints and setting up assemblages to paint.  For some reason, the thought of the artist intently staring at a donut brings me great joy.

The other donut-themed art came from London’s Unix Fine Art who showed American artist Peter Anton who is known for oversized chocolate sculptures (the non-edible variety) and giant popsicles. Anton succeeded in making me hungry for a donut, a feat in itself, but little else. The works speak to decadence, as so much postmodern work does, yet in a defanged way. Anton’s sculptures are guaranteed not to offend or affront. 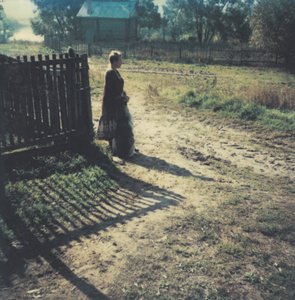 On the photographic front, Anya Stonelake/White Space Gallery exhibited a couple of Andrei Tarkovsky’s family Polaroids that, despite the cultural caché of the Polaroid, are compelling and eerie on the level of his great film Solaris. 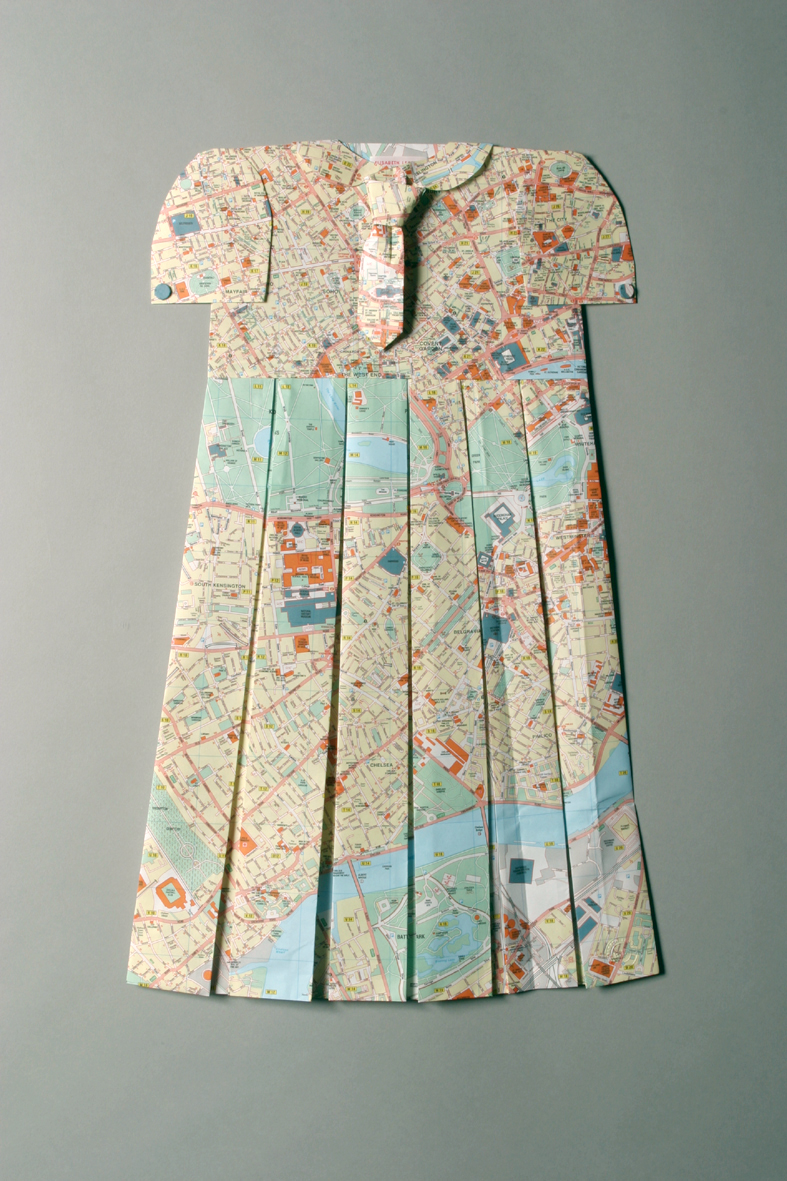 Elisabeth Lecourt’s paper dresses at Galerie Envie d’Art round out the British presence for me. Simple, pleated maps folded into children’s garments, parochial dresses or button down shirts that complicate place and the person, by suggesting that places can’t be worn, can’t be represented without flatness.

The London galleries showing this year at Art Chicago sported a wide-range of new artists that created an aesthetic topography that, while uneven, was anything but flat.