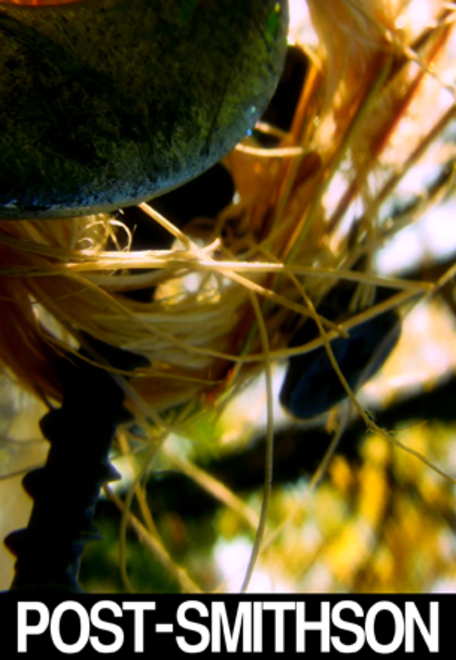 Tucked behind a duplex and overlooking a cornered courtyard is the West Town apartment gallery, Noble & Superior Projects. This month, they are presenting a show entitled "Post-Smithson," a parodic and periodic study by artists Isabelle Gougenheim, Emily Irvine, and Emilie Crewe.

Before the "post," there was Smithson. Robert Smithson is best known for his earthworks: monumental testaments to the human hand as well as the overwhelming entropy of time. In his essay “A Sedimentation of the Mind: Earth Projects” written for Artforum in 1968, Smithson called it “abstract geology:”

“One's mind and the earth are in a constant state of erosion, mental rivers wear away abstract banks, brain waves undermine cliffs of thought, ideas decompose into stones of unknowing, and conceptual crystallizations break apart into deposits of gritty reason.”

Smithson sought to aestheticize the struggle of intervention by humans with his large earthworks, yet beyond that, he brought his sensitivity to the infinite into the sterile gallery space with pieces like Chalk and Mirror Displacement, 1969 (currently on display at the Art Institute of Chicago’s Modern Wing). This work mimics his Non-Site #1, a hexagonal airfield with runways radiating out from a central dirt mound in the Pine Barrens of New Jersey; it has “six vanishing points that lose themselves in a pre-existent earth mound.” In general, Smithson is known for playing with site and space: altering it, constructing it, transforming it. This led him to write a “Provisional Theory of Non-Sites” (1968):

“The Non-Site #1 (an indoor earthwork) is a three dimensional logical picture that is abstract, yet it represents an actual site in N.J. (The Pine Barrens Plains). It is by this dimensional metaphor that one site can represent another site which does not resemble it - this The Non-Site.”

Basically, Smithson was indicating the location of the in-between, a space of transition and communication beyond normally perceived relationships. It is a space of tension and possibility created through juxtaposition, a spatial collage that sets new rules and limits of understanding as well as lifting others. In the ’68 Artforum essay, he went on to say:

“the strata of the Earth is a jumbled museum. Embedded in the sediment is a text that contains limits and boundaries which evade the rational order, and social structures which confine art.”

So let’s get on to the "post" aspect of this show. "Post-Smithson," according to the gallery literature, refers to the exploration of “natural materials through collage, film and video installation.” This allusion, limited as it may be, sets up an important showing of works that seek to reposition Smithson’s tensions within a contemporary, sometimes digital, context.

In the back corner of the gallery, a small video installation by Emily Crewe is the highlight of the show. A video of a close-up of a fish’s mouth, slowly opening and closing as one gigantic eye stares back, unmovingly is projected on a thin closet wall over a sculpture that is reminiscent of, at once, a bird’s nest, a mouth, an anus. 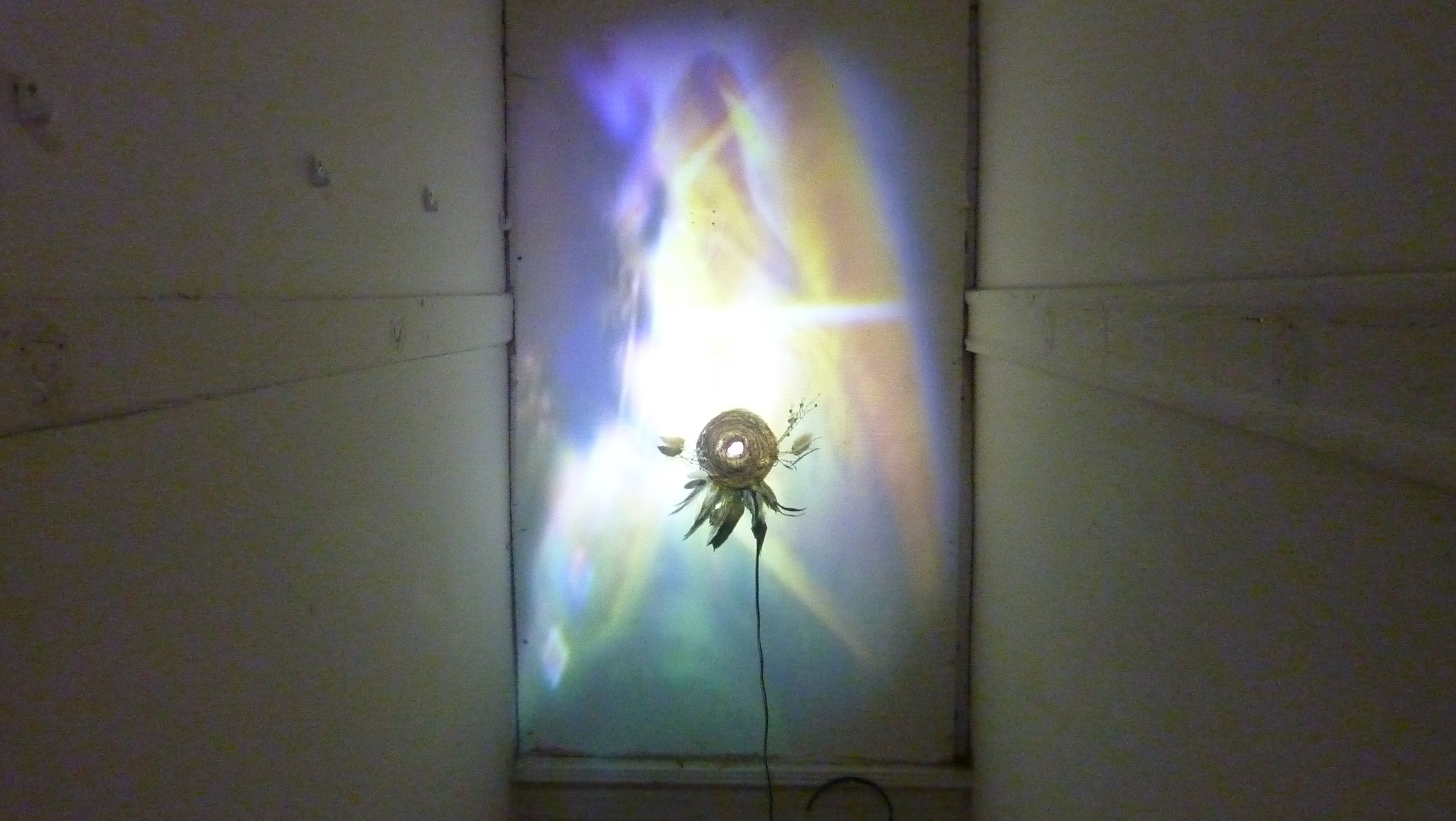 Crewe’s other video work is less transcendentally awesome, though still communicative of Smithson-esque ideas concerning the fission of aesthetic sensibilities and nature. Both this video, Sedimenting, and the 16mm projection, Untitled, by Emily Irvine display characteristics common to art house films from young auteurs: close-ups, visually arresting props, etc. There are a few nice stills to be gleaned from the short films, such as the one below, but as a whole lacks the potency of Fish Grass. 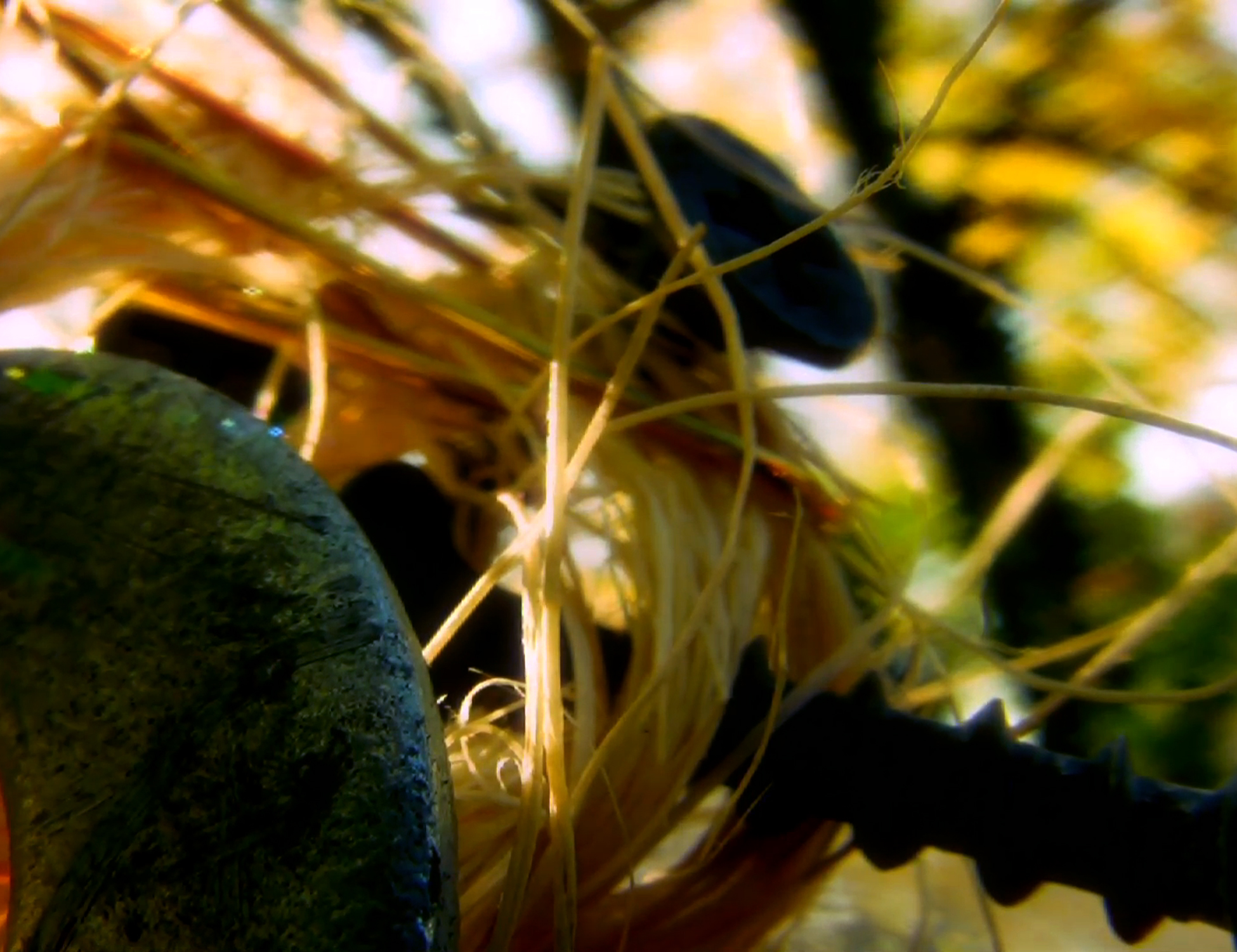 Emilie Crewe’s work also extends into the object-on-the-wall field of installation. A cluster of digital prints, one manipulated beautifully with some small glitches, are pressed to the wall. Leaves, stems and peels are pinned to the prints with a slab of Plexiglas, obscuring the subjects of the prints which are orange peels sewn together with a baseball stitch. Again, Smithson is called up from his resting place in the now-mythical Spiral Jetty, and Sewn Citrus Rinds: microphagia makes a little more sense. However, this collection of little-bites succeeds in presenting a demure layering of environments: the natural, the modern, the digital. I say demure since the recontextualization remains far too neat and clear. The objects are secured like a specimen on a glass slide: between the image (slide) and a wafer of glass. It’s comfortable like that.

The final set of work comes from Isabelle Gougenheim. Each small painting, couched in nests of gesso drips and straw, succeeds in creating independent scapes that transition between the materiality of exposed straw and the slight texture of the painted surface. In the Underground Series, 1-10, delicate lines overlap in swirled configurations or bold swoops like the clarity of a Eugene O’Neill narrative arc. There’s a softness to the dirt and discrete drops of blood in the Underground Series, like the calm dispensation of humidity during a thunderstorm.