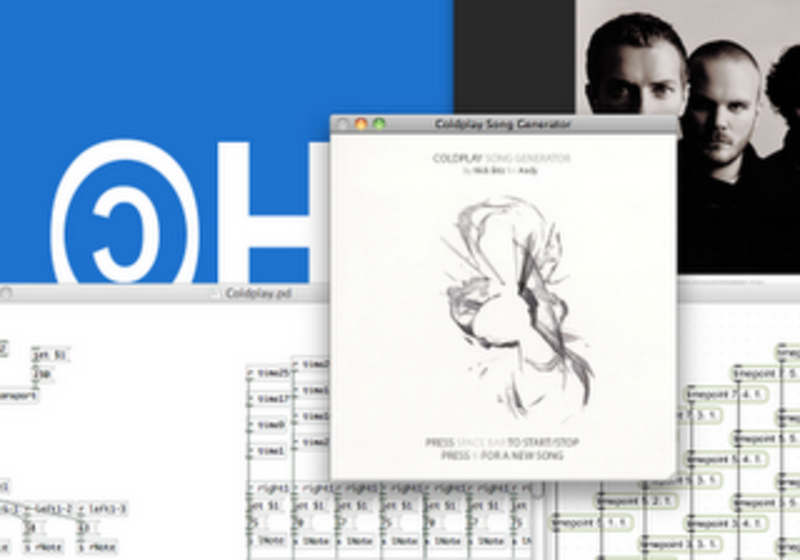 The Consumer as Prosumer

Nick Briz (pronounced breeze) makes art according to the belief that copyright law as it currently exists is a violation of vital human expression. His artistic practice finds itself at the nexus of art and technology; within this intersection the artist produces interrogations and critical expositions of the digital everyday.

The presentation began with a simple explanation, “press the SPACE bar to begin the song and press N to randomize certain variables and get a new song.” SPACE, and the familiar Coldplay song “Clocks” started playing over the speakers. N, and a different melody (perhaps song?) presented itself, similar to “Clocks” in its use of a minor key, arpeggio and 3-note base cords. Over and over, slight variations were calculated and played.

Briz then went on to explain the process behind making the generator and the logic of producing “likely” Coldplay songs. He explained the basic use of Max/MSP, a visual programming language that, even to this n00b (that’s newbie in tech-speak), seems apprehensible.  An image of it is below (all images are courtesy of Nick Briz, 2011). 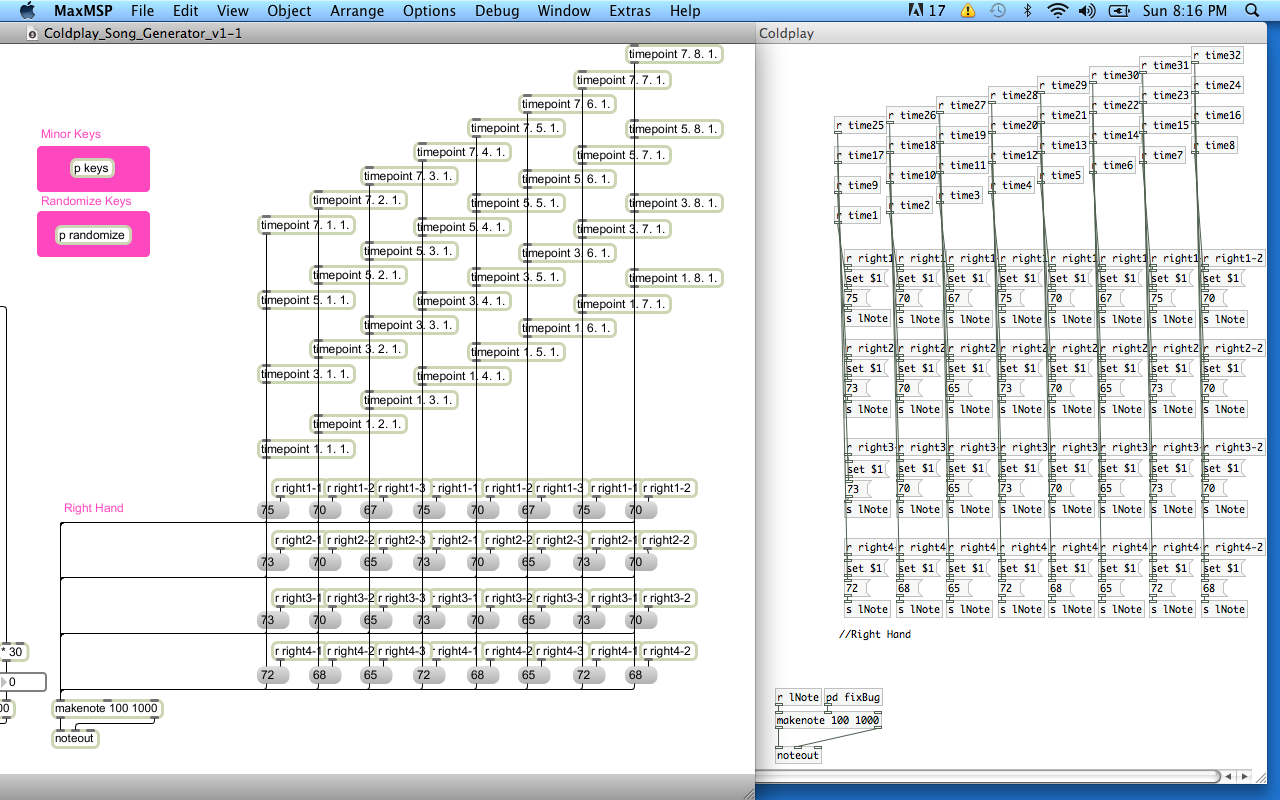 Max/MSP, a language developed more than twenty years ago to produce audio and multimedia programs is modular and has become so popular due largely to the fact that it has a wide base of user-generated modifications which can be attached to existing modules. It is not freeware, however a few of its developers did make a freeware version called Pure Data (image shown below) that is a little bit less user friendly, as is often the case with freeware programming languages. In line with Briz’ ethic of free and open exchange, or as he says, copy <it> right, he rewrote the code in Pure Data: both modules are attached to this application file.

Through the example of Max/MSP and Pure Data alone, one can notice a custom of openness and social construction at the core of programming as a practice. Of course, this is not always the case (think Apple, Microsoft and most any other graphical user interface-based programs). Nick Briz, however, would like it to be. 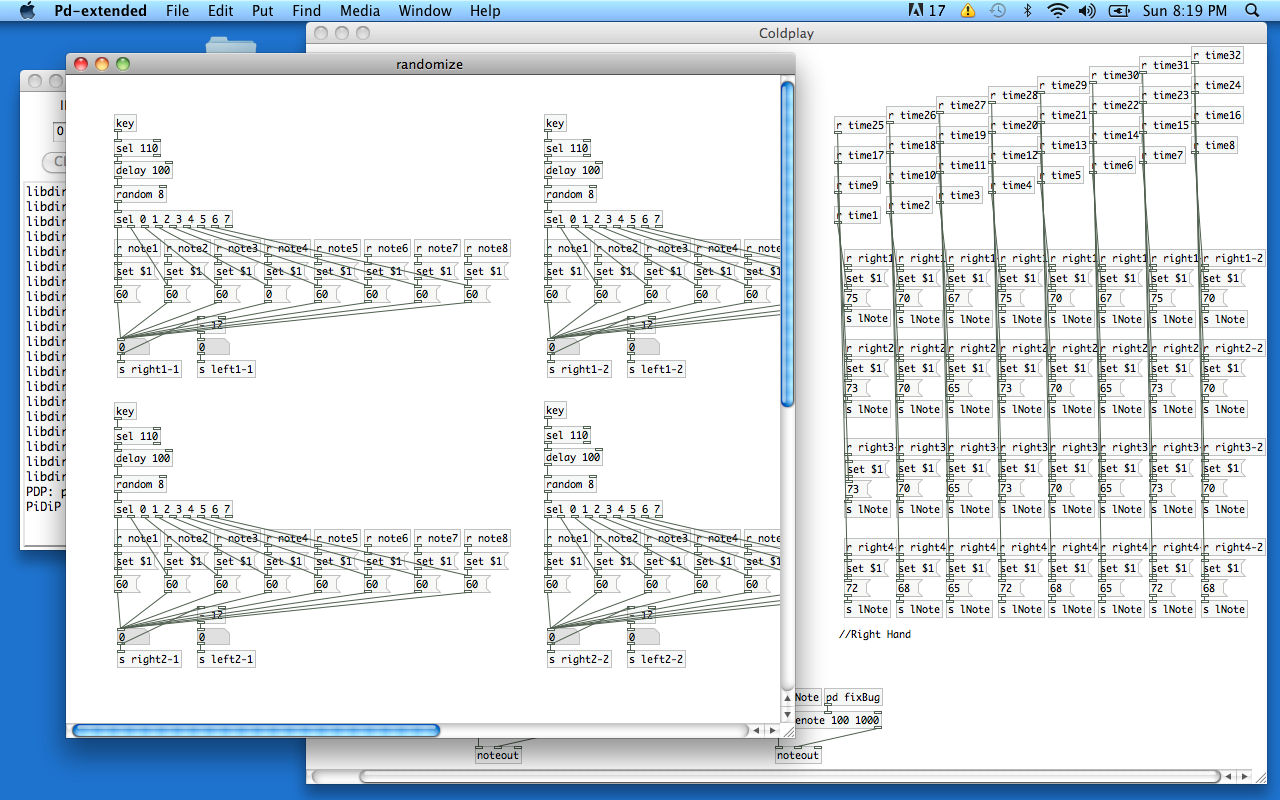 Generative artwork such as “Coldplay Song Generator” has posed new questions in the world of art, or perhaps the same old question in a new guise. If a program, not a person, generates something beautiful and meaningful, is it art? Variations on this question were echoed by the audience during the question and answer period as well. One audience member rightly questioned the validity of naming the program’s output iterations “songs.” What is copyright if a formula generates a song that’s been written? What is copyright if code is the maker? One member replied with the suggestion to just copyright every iteration that the program generated as a way to culture-jam the ethic of copyright. Everyone giggled.

Many of us know already that, as far as copyright law is concerned, two worlds exist: the material world and the digital world. The realm of material copyright (intellectual property rights are fundamentally constructed on an ethic of material possession) has been trying to influence the type of free-exchange gift-economy apparent in online social interactions. This ethic, it could be said, was written into the web by Tim Berners-Lee as a mode of systems-replication and expansion. It is difficult to imagine an internet without the type of ethic that allows for the massive amount of free media and information sharing that currently exists, to the chagrin of suddenly outmoded production outlets.

Visible and obscured, surface and depth, these distinctions are becoming phenomenologically separate spaces. The dialectical experience of both is at a crossroads. The ability to learn and disseminate code, and therefore programs, is becoming easier yet isolated. The vast majority of people tend to stick to comfortable graphical user interfaces rather than familiarize themselves with the structure of those interfaces. It’s pure pragmatics. However, there’s an interesting parallel that exists with what has been called the consumption/production (or lamely ‘prosumption’) model of cultural exchange afforded by desktop multimedia publishing programs and free social platforms such as YouTube. Simply, the model of consumption has shifted to one where consumption is no longer an end unto itself, but a means to reproduction. Briz’s art opens up these parallels and exposes the visible and obscured in hopes of reminding the “prosumer” of their potential.

Posted by Joel Kuennen on 2/28/11
RELATED ARTICLES
COMMENTS (0)
ArtSlant has shutdown. The website is currently running in a view-only mode to allow archiving of the content.