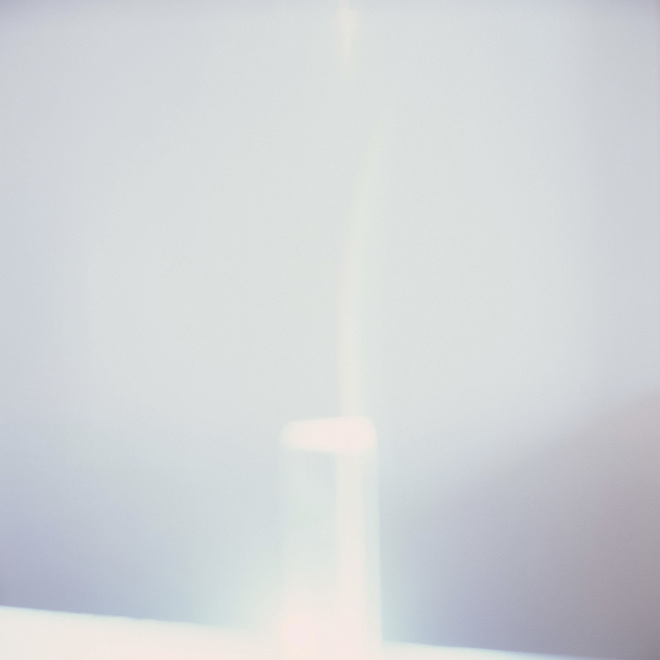 Notes from the Grandsire

The inaugural exhibition at Alderman Exhibitions, located at 350 North Ogden Avenue, opened on January 15th with work by Chicago artist and University of Illinois-Chicago (UIC) MFA candidate, Raquel Landensack.  The distinct industrial space,storage unit turned gallery, inhabited by Alderman pairs well with the understated collection of twelve photographs from Ladensack’s current body of work.  The curation of the newly configured space is carefully restrained, and compliments the subtle beauty and unassuming quality of the photographs on view.

Ladensack’s work demonstrates her clear attention to time, space, and  the formal elements of a landscape.  The photographs depict a range of locales, from Iceland and Michigan, to manipulated abstractions of her Chicago studio. Ms. Ladensack’s predilection to document the natural landscape is apparent in the exhibition; more than half of the pictures take their focus outdoors, providing a window into the quiet splendor of the natural world. Still shots of forest canopies, expansive mountains and waves crashing into land hold a temperament that is raw and pure.  Although the investigations of this genre contrasts greatly to the controlled images that experiment with object and light, a keen ability to document and observe is a consistent current running through the exhibition.  This commonality supplants any need for a direct narrative, but what is not obvious while viewing is the significant influence behind the photographer’s work.

In conversation, Ms. Ladensack confirmed artistic influences that seemed evident to me: the varied work of James Welling and the minimal musings of Laura Letinsky. But these artists hold a limited amount of effect on Ladensack’s creative practice.  What holds greater importance is the amateur camera work of her late grandfather.

In 1999, Ladensack inherited her grandfather’s camera and over 3,000 images, the result of decades of devotion to a serious hobby.  What began as a project to archive this material, quickly spurred inspiration for the young artist’s own work.  She decided to retrace her grandfather’s footsteps, traveling to China and throughout the United States in search of the link to her family's lineage, and in her words, “To enter into a critical discourse regarding the ability of a photograph to function as simulacra in place of that which we cannot have knowledge of— such as our past [familial heritage].” Laced with an underlying association to her family lineage, Ladensack’s work has evolved  into a contemporary thesis.

Most noteworthy in the exhibition, and a direct reaction to the familial lineage expedition, is the artist’s imagery of Iceland. Funded primarily by a grant from the University of Illinois’s Provost, Ladensack’s physically demanding and emotionally exhilarating journey started last summer.  Inspired by the imagery from her grandfather, she sought out regions he had visited and with the help of modern technology she identified many areas from the inherited portfolio: the Northwest Fiords, Snæfellsnes Peninsula, Látrabjarg Cliffs and the Great Geysir area of Haukadalur.

Shooting quite literally from the hip (she uses a Rolleiflex camera) Ladensack captured the essence of life in Iceland and spirit of her intended discourse. Having learned from the work of her grandfather, Ladensack’s photographs offer an open conversation with her ancestor, taking pictures of the places and things that he shot over fifty years ago. A stand out in the exhibition is Iceland II (2010), seen above, a plunging landscape, lush with verdant hills and a single white bird floating effortlessly within the frame.  Subdued magnificence come to mind when viewing this photography.  It is quiet, yet powerful, capturing the rugged volcanic mountainside that flanks the Stjornarfoss  near Kirkjubæjarklaustur.

The mystified seascape in Shifting Ground (2010), seen above, represents a fortunate misstep in Ladensack’s expedition.  She says, “[There was a] cliff I couldn't find that my grandfather photographed in the 1960s.  It was the spot I was looking for when I planned the trip but never quite found.” Instead, she chose to depict a seaside cliff, in two views, with a sort of “camera one, camera two” approach.  The two photographs are nearly the same, but the slight contrast of deatails and vantage point, speaks to Ladensack’s impeccable timing and grasp on time and space.

As the Ox-Bow's Artist-in-Residence, in Saugatuck, Michigan, Ladensack returned to her roots and gave her an opportunity to bring her patrimonial experiment to American soil.  In Saugatuck, the artist built upon her familial theme, pressing forward, and challenging her practice while exploring new surroundings not imaged by her grandfather.  Her thoughtful point of view remains in the four photographs included in Alderman’s exhibition, simply titled respectively, Michigan I-IV (two examples seen below).  The pictures celebrate the beauty and resources of the American landscape.  The imagery is universal, but utterly American.  Part of the Ox-bow project was completed in collaboration with Ladensack’s partner, Christopher Meerdo.  Working without the precedent of her grandfather, the artist collaborated with Meerdo finding source material through GPS co-ordinants and exploration.  Ladensack said a lot of the Michigan project was about the response she and Meerdo had with one another and the way they interacted with nature, recognizing their sense of place, their surroundings and each other.

Strikingly different from the poetic portrayals of Iceland and Michigan, Ladensack’s studio work still keeps with her approach traditional approach to landscape.  Natural light, open composition and pure color characterize the images from a relatively new practice for the photographer. The contrast of work in the exhibition presents the artist’s divergent ways of thinking when behind the lens.  In the outside world, Ladensack immerses herself in the environment and takes images that respond to that experience.  Inside the studio, her compositions emanate from a concept or an idea, and organically progress through the shoot and subsequent editing.

As with her natural compositions, awareness of time and space is still a significant element in the abstracted views. Egress, 2010, at top of page, is a whitewashed abstraction with strong tonality and layered depth.  The isolated object in the distance is indiscernible, isolated by the confines of the frame.  It could be a trash can in the middle of the recent blizzard or a can at the end of a drafting table, the image is unknown, but lends a feeling of remoteness and separation, perhaps a reflection of the photographer without her natural muse or ancestral guide.  Due to Chicago’s inclimate winter weather and the aforementioned blizzard, the artist has no choice but to continue to photograph in the studio.   Her most recent work is indoors, experimenting with 16mm film, some of which will be exhibited as part of her graduate show at UIC.

The potency of the photographs is driven by Ladensack’s approach.  Working solely with a twin lens Rolleiflex camera, Landensack’s point of view is from the waist.  She finds it easier and more intuitive to have the camera hang from her neck.  The portability and lightweight quality of the Rolleiflex allows Landensack to experience her surroundings while photographing them. She prefers a “straight” image when shooting the world, rarely enhancing or retouching an image, to ensure a truly organic response. Ladensack’s idiosyncratic method personalizes each image, which transports you to each environment. Starting with the camera and ending with each shot, Ladensack’s approach to photography is highly personal and rife with identity.  Her grandfather may have been an inspirational guide for the Ladensack, but the pictures are her own.  Fusing her grandfather’s past with the present, Ladensack creates relational imagery for a new tradition.

Posted by Robyn Farrell Roulo on 2/12/11
RELATED ARTICLES
COMMENTS (0)
ArtSlant has shutdown. The website is currently running in a view-only mode to allow archiving of the content.