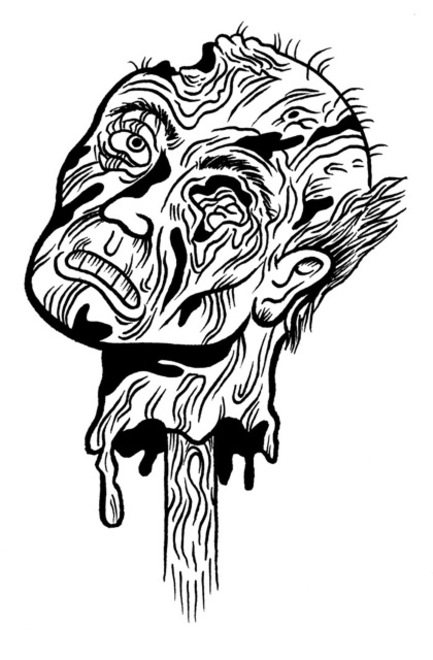 The Inadvertent Chicago Biennial of 2011

Western Exhibitions’ packed show “Heads on Poles” achieves almost inadvertently what most biennials regularly fail to do: gather together artists and artworks that can be seen as representing common artistic impulses under an interesting theme. Taking the title as the theme for the exhibition, the curators Paul Nudd and Scott Wolniak, Chicago-based artists themselves, gathered together over 60 artists who only received basic submission guidelines and then were free to create and interpret the theme however they wished.  Wolniak and Nudd anticipated and desired that the results would be uncontrolled and far-flung. And the artists delivered.  The result is that in many ways “Heads on Poles” presents a microcosm of contemporary art practices with a distinctive Chicago flavor.

Continuing and updating the modernist tradition is Ali Bailey who contributes a Constructivist-like, predominantly wood creation.  Bailey may be the artist who most fully and clearly explores the age-old sculptor's problem of creating an armature to support a figure, the pole that supports the head, a facet hinted in the title but really only explored here by Bailey.  Bailey clarifies this intent by including the curatorial directive on the base: Head + Pole + Base 3-8 ft total height [freestanding].  Following reductive modernism, Bailey’s figure is reduced to just armature, kind of like a Joel Shapiro stick figure only much more interesting.

Sustaining some of the formalist rigor of Bailey but inflecting it with personal content and unusual materials is Edra Soto’s contribution, you could call it a kind of eccentric modernism.  Seen at left and titled Tito R.I.P., 2010, the work looks like a cruciform grave marker from a distance.  Moving closer, you realize that may be a grave marker, but for a cat, and presumably Tito’s skull could in fact be right there in front of you, as a cat skull is included in a niche near the top of the piece.   The piece brings to mind Egyptian funerary rites, since they would mummify and bury their cats.  Likewise Soto creates a cat memorial, the marker itself is made of scratching post cardboard and also bears live catnip plants as a kind of offering or something.  The result is artistically solid while also humorous and oddly touching, especially if you are a cat owner who really loves their pet.

Nick Black’s Popcorn, 2011, could perhaps be said to reflect the rise of installation-based art over the last couple decades. Although I didn’t have the pleasure of seeing it in action, plug in the rickety contraption and it will in fact make popcorn, via a purposely complicated process that involves no shortage of power cords and pulleys.

Sparked by a criticism of my review of “The Daley Show,” a portraiture exhibition on the subject of Mayor Daley at another gallery, there has been an ongoing discussion on Chicago Art Review about political art and how it should/could function, whether it should be provocative or if it can be thoughtful.  Taking up the political art mantle, Mike Diana contributes Bush Penis, 2010, a mixed media work that features the recognizable head of George W. Bush impaled on the tip of a penis.  The work wears provocation on its sleeve, but doesn’t really offend and or deliver much beyond the Bush-is-a-dickhead one-liner.

Tradition and history can either bury you under an oppressive weight or provide something useful to synthesize and move past, creating the new traditions and the new art history.  In Chicago, this tradition and history is the city’s revered Chicago Imagists who, in the now standardized art historical narrative, maintained the alternatives of figuration, narrative, craft, and wild color, to the still-dominant-though-waning Abstract Expressionism in the 1960s.  The influence of the Imagists in Chicago is still unmistakable, touring the MFA exhibitions each year only confirms that.

Fortunately at “Heads on Poles” the Imagism legacy seems to be an inspiring tradition.  Rachel Niffenegger contributes Harry Eye Hole, 2011, a mixed media work that references the Imagist Hairy Who? group while also being genuinely and viscerally creepy.  Coincidentally, disembodied heads are a subject Niffenegger has worked with before.  Her 2010 exhibition turned Western Exhibitions’ Gallery 2 into “a hall of heads” and was picked by Robyn Roulo as one of the best exhibitions of 2010, describing the affect as “delightfully chilling.”

I wasn’t surprised to learn that artist David Leggett counts the Hairy Who? among his influences as well.  He even moved to Chicago in hopes of meeting them and he met most of them within his “first month of living [in Chicago],” which indicates their availability to mentor younger artists.  In “Heads on Poles” Leggett gives us Prince, 2011, which is listed as “mixed media” but appears for all the world like an aluminum foil-wrapped baked potato, studded with rhinestones, and stuck on a long dowel rod.  Despite the simple and “low” materials, which I perceive as related to the Chicago Imagists who never recognized medium hierarchy, the resulting abstract portrait of the polymorphous musician Prince is quite satisfying, especially if you are familiar with Prince, his personal history and his wardrobe.

There’s been some talk lately about a Chicago Biennial or how to best revitalize the beleaguered Art Chicago art fair.  I would say that “Heads on Poles” provides an idea of how such a model could work, if the powers-that-be look at it.  “Heads on Poles” is artist-centered, it’s artist-curated, and artists were given total freedom to create. In this way it gathered together a wide-range of artists and the differences between their approaches manifested organically rather than being forced by a curator.  The show has a fun curatorial conceit that has a serious artistic question to it as well, so it attracts a variety of viewers.  The artworks that came out of it may not all belong to the ages, but some were good, and all the artworks were quite interesting and fresh, not to mention fun, there's a definite creative energy in the gallery.  A lot of time in the halls of power is no doubt spent worrying about numbers and the bottom line, “Heads on Poles” indicates may be we should start thinking first about the artists and encouraging creativity.

Posted by Abraham Ritchie on 2/7/11
RELATED ARTICLES
COMMENTS (1)
Chicago Biennial
Chicago Biennial?! Good idea--maybe we could mate the Art Loop Open with existing galleries (including Art Loop pop-ups and other pop-ups throughout Chicago) and come up with a sum greater than its parts that would really demonstrate Chicago's art muscle--not so much a canonization of bankable artists like the Whitney Biennial but a show of vitality and irreverence!
Comment by: k.a. letts on Wednesday 02/09/11 at 10:34 AM
ArtSlant has shutdown. The website is currently running in a view-only mode to allow archiving of the content.