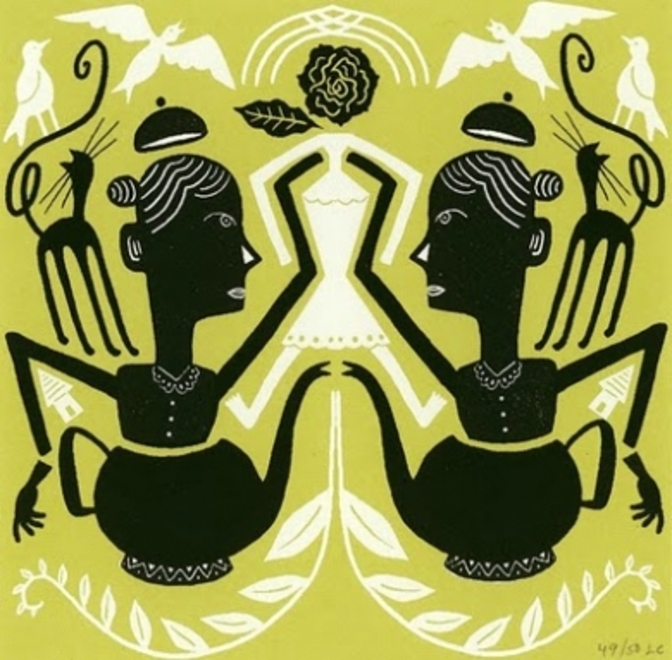 “New Chicago Comics” is a group show featuring the work of Jeffrey Brown, Lilli Carré, Paul Hornschemeier and Anders Nilsen, organized by Curatorial Assistant Michael Green, and on view now at the Museum of Contemporary Art, Chicago (MCA) in the space commonly used for “12x12” exhibitions.

Brown, Hornschemeier and Nilsen, along with John Hankiewicz, had all formerly collaborated on The Holy Consumption, a website that featured a new post by one of the artists every Sunday. The addition of Carré is a welcome one, and all of the artists in the show hold their own by displaying a boatload of art, indicating the prodigious amount of work they’ve created over time.

Paul Hornschemeier, From The Three Paradoxes, 2006. Courtesy of the artist.

Beginning with Hornschemeier, there’s a captivating series of preparatory sketches that feature the blue pencil underdrawings of his characters.  The works reveal the painstaking repositioning and re-shaping each one of his figures goes through before the drawing is finished (displaying this facet of drawing comics has become almost de rigueur and was a notable element of the MCA’s exhibition of Chris Ware’s work, back in 2006).

The wall text mentions both the comics and cartoons that Hornschemeier draws inspiration from, such as Marvel and Bazooka Joe.  However the unmistakable curving, bulbous, and, at points, plump forms of Alex Anderson, creator of Rocky and Bullwinkle, indicate the most prominent influence.

The framed panels from his forthcoming Life With Mr. Dangerous, available in May, illustrate how each panel is a work of art in and of itself. The printed pages of his previously released The Three Paradoxes demonstrate how Hornschemeier is deftly capable of alternating between stylistic approaches in his image making, which range from intentional copies of the Ben-Day dots so familiar in newspaper comic strips to an almost Peter Max-like cast of characters, replete with looming thought bubbles. He frequently employs this technique as a vehicle for advancing multiple plotlines simultaneously.

Anders Nilsen has a stunning set of ink on paper drawings from his series Big Questions on display. Nilsen has worked on this series for over a decade and it will soon be collected into a 600-page publication, forthcoming from Drawn & Quarterly.

Perhaps drawing inspiration from Hergé's Tintin or Basil Wolverton’s Spacehawk, the force and sureness of Nilsen’s line is phenomenal. He assails the page head-on with ink, seemingly forgoing a pencil underdrawing, with the occasional masking, via Wite-Out, of an edge or line here and there. His work is high contrast and stark, with the narrative driven almost solely by the imagery; the text is sparse, or more often, completely absent.

Nilsen’s Big Questions anthropomorphizes a group of animals, with birds being the main protagonists, focusing on their eerie relationship to one and another. Their interaction, alongside their interactions with a small handful of humans, upsets our expectations and allows the reader/ viewer to project what they will onto them. The economy with which Anders evokes emotion is haunting.

Lilli Carré, Excerpt from The Lagoon, 2008. Courtesy of the artist.

Lilli Carré is represented by a series of pages from her 2008 novel The Lagoon.  Her folksy patterning and sinewy figures populate a world dominated as much by her well-developed aesthetic as by her attentiveness to sound, a major element of the tale.

The element of sound in her work becomes clearer in the animations on display. The hypersensitivity she pays to the audio track is reflected by succinct sound effects and equally as affective mood-setting sounds such as wind, water or simply silence.

An amazing screen-printed, accordion-fold book exhibits Carré’s facility with each medium she tries her hand at. But regrettably the multi-page panels, illustrating the slight variations of action in an additional animation, are so far out of view, at the top of the wall almost abutting the ceiling, that their subtleties are lost on the straining, squinting viewers below.

One repeated theme in Carré’s work is that of the head and its disembodiment, most poignantly illustrated in the animated shorts, “What Hits the Moon” (2005) and “Head Garden” (2009). Skulls roll down hillsides and seedlings sprout from decapitated heads in her distinctive brand of fairy tale noir.

Last but not least, Jeffrey Brown’s drawings and sketchbooks display a glut of preparatory sketches, notational doodles and directives alongside fully formed panels, mapped out by the artist on the wall text by the entrance.

Brown’s chiefly autobiographical work has a mellowing effect, and the passage of time is languorous and lingering. This lends itself brilliantly to the jejune sentimentality of the Death Cab for Cutie song “Your Heart Is An Empty Room” that he animated a video for. Each pregnant pause, glance and gaze is painstakingly mapped out, frame by frame, in a notebook in the far display case, synchronizing the actions and emotions of the characters to flourishes of the keyboard or rolls of the drums in the song.

“New Chicago Comics” is a good show and it’s worth a visit before it closes on January 30. While each artist draws inspiration from a unique set of sources and creates work that varies drastically from style to style, there is a tone— of alienation? pathos? inscrutability? —  that resonates throughout. With the plethora of phenomenally talented comic artists working in Chicago, hopefully explorations and exhibitions of the medium like this one will be ongoing, and investigations into why this phenomena is occurring in Chicago specifically, if in fact it is, will also be addressed in future exhibitions.

Posted by Abraham Ritchie on 1/24/11
RELATED ARTICLES
COMMENTS (0)
ArtSlant has shutdown. The website is currently running in a view-only mode to allow archiving of the content.