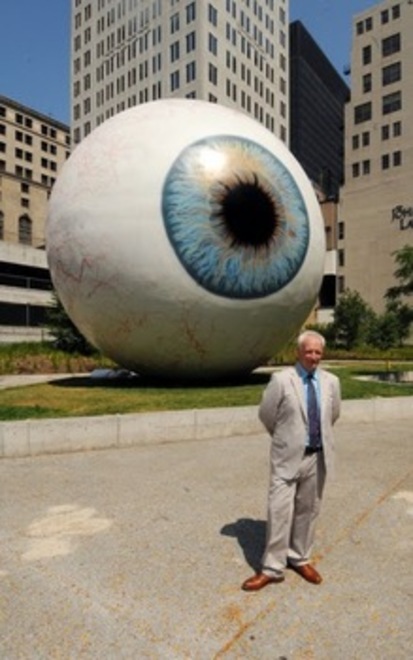 1. Galleries that moved on up

This was the case with three well-loved Chicago art galleries who moved into significantly more accessible locations.  Gallery/art book store Golden Age moved into the heart of the West Loop gallery district, the 119 North Peoria building that also houses Western Exhibitions.  Ebersmoore quit its digs to make the same kind of relocation, just a stone’s throw away from Golden Age's new space, at 213 Morgan Street.  Veteran apartment gallery 65GRAND moved into a great storefront across the street from its previous location on Grand Avenue.  As many galleries exit the scene, it’s reassuring to see other galleries step up.

Shows at Western Exhibitions always provoke a reaction of some kind from me, which is much more than I can say about some Chicago art galleries this year.  Western started off its 2010 season very strongly with a side-by-side exhibition of artwork from Ben Stone and Joey Fauerso, continued their program with an excellent presentation of Stan Shellabarger and Dutes Miller and closed the year out on a high note with Deb Sokolow’s solo exhibition and Ryan Travis Christian’s continuing curatorial experiment, “The Power of Selection, part three” which is also quite good.  Let's not forget their previous shows from 2010 which included Richard Hull's exhibition, "The Power of Selection, part 1," "Suitable Video" and Rachel Niffenegger's show. Best of all, there’s no doubt that Western Exhibitions will continue mining this aesthetic vein.

Speaking of Ms. Sokolow, her artwork, seen above, was also a clear highlight of this year in Chicago.  As part of the “Production Site” exhibition at the Museum of Contemporary Art (MCA), we were treated to Sokolow’s ongoing and evolving installation You tell people you're working really hard on things these days (2010), given a prestigious place on the wall of the lobby.  2010 ends with a solo show for Sokolow at Western Exhibitions.

Also over the summer, I met the artist and had a conversation with her in which she revealed a recent artistic breakthrough, the first results of which are currently on view until December 31st at Western Exhibitions.  Sokolow’s current attempt to produce a literal gesamtkunstwerk, a never-to-be-finished book that details a vast conspiracy, follows the standard trajectory of modern artists but complicates it by including High Modernism’s unloved cousins, like craft, drawing, narrative, politics and illustration. The attempt to move narrative back into the fold of art is a daunting task in a post-Greenberg world, but Sokolow is successfully doing it without sacrificing critical inquiry or formal economy.  It’s also keenly current yet eerily historical, Sokolow’s work details conspiracy theories and paranoid speculations that are of our time but could be from the ‘60s about Kennedy’s assassination or even older, about the power of the Free Masons.  The musings are laughable at first, until you consider the current climate of fear and paranoia, or turn on FOX news for about five minutes.  The new works also hint at a body of work that will be infinitely scalable—I can’t wait to see the works presented again next year.

I first came to know Dan Gunn through his art criticism and that eventually led to his writing for ArtSlant: Chicago.  In early 2010 Gunn let me know that he needed to stop writing to more fully focus on his artistic practice and his last article was in April (Gunn's 2009 Cascade seen at left).  I was sad to see Dan go, but a few months later Gunn showed the public what he had been in doing in his free time through his artwork included in “New Icon” curated by Britton Bertran at the Loyola University Museum of Art.  After seeing his work I knew whatever absence his always-excellent writing created, it was more than made up for by the art, which, put briefly, explores the nexus between when an object ceases to be painting and becomes sculpture and vice-versa.  Lloyd Dobler Gallery opened their 2010 season with a solo show by Gunn in an exhibition that was widely praised by critics.  I’m also looking forward to Gunn’s exhibitions in 2011, wherever they may be.

If Larry Gagosian's gallery is having a show of Ed Paschke’s artwork curated by Jeff Koons, it would be a wise idea to have an exhibition to complement it here in Chicago, the artist’s hometown.  And that was just the case this summer, as the two galleries launched an exhibition shown in both venues.  The artwork at both locations was excellent and most pieces were “Not for Sale,” a sign that the motivation was at least mostly beyond the financial.  For me the highlight was Paschke’s artwork shown at Alan Koppel, especially an early oil painting that included a vignette from Georges Seurat’s A Sunday on La Grande Jatte-1884.

For the final show in their former location, 65GRAND showed the work of 3Arts Artist Award winner David Leggett and it was great show to say good-bye with.  I see a lot of new art, usually in MFA shows, that uses “low” craft materials like glitter, pom pom balls and googly eyes to make “high” art.  The results are almost always strained and unsatisfying.  But in Leggett’s hands that is not the case.  The “low” materials go hand-in-hand with Leggett’s odd universe, where Grimace and Lil Wayne walk together with an anthropomorphic bottle of booze. I know I've wanted to see a visual artist interpret Weezy, Scarface and the Halle Berry do.  Among a myriad of other topics, Leggett investigates hip-hop and black culture with a distinctly Chicago aesthetic—swirling colors, the inclusion of the human figure, an emphasis on the handmade and craft.  I wasn’t really surprised when I learned several weeks ago that the artist came to art school in Chicago with hopes of meeting the Hairy Who group. Leggett says that upon arrival in the city, “I got to meet many of them within my first month living here. They were so helpful in my practice. I still think about them whenever I work.”

Non-profit institutions that are pondering how to best use and deploy social media should take a look at Jennifer Lucente and the Chicago Architecture Foundation  (CAF).  For 2010, Ms. Lucente set herself a goal of going on all 85 “core” tours that the CAF offers calling it the “the 85 Tours Challenge” and setting up a blog to follow it and frequently taking to Twitter to live-tweet new nuggets of knowledge.  If you follow me on Twitter you know I’m often exchanging with Jennifer, @chiarchitecture about something architecture-related.

And that’s the strength of CAF’s use of social media; to present architecture as a dynamic force that can shape our lives and experiences, without pandering to popular taste and with a strong emphasis on history and information.  Realizing that architecture is not simply an objective historical site, they don’t shy away from issues of quality or taste.  Actually the opposite is true; CAF has recently initiated a series of debates that the public can attend, for an admission fee.  It makes one wish that art museums treated their collections as dynamic, relevant resources, rather than dusty records of art history.

Tony Tasset’s giant fiberglass eyeball that landed on State Street wasn’t great art, but it did get people talking and not just art people, it was the people on the street, passersby. I think that was a big part of the point and Tasset even mentioned that in my interview with him.

I liked that the usual art crowd didn’t like it, in her review for the October issue of Artforum this year Michelle Grabner described the work as “what can unfortunately only be called middlebrow pastiche.”  That seemed a large part of the point to me, but Grabner clearly didn’t feel that the piece was critical or subversive enough.  Regardless this has to be a “Best of 2010” inclusion since it spawned a wave of anti-Eye religious pamphlets stuffed in downtown newspaper boxes titled “An Evil Eye that God Hates!” that claimed, “The eye is a trap, because it is causing a lot of people to sin and fall.”

Every month I eagerly read Fruzsina Eordogh’s street art report, a really cool feature to come out of the Chicago Art Magazine.  I’m very interested in the potential of street art and the artists who choose to create artwork like that, so it’s great to read a monthly column that gathers together various pieces that may have already been destroyed through the city’s graffiti “cleaning” program.  In that sense, it provides an electronic historical record, which is indispensable to an art form that can be wiped out legally at any point.  Eordogh also parses out street art etiquette and the various authors, pseudo names-only of course, who are behind the different pieces.  I’ve come to match several artists with their works by reading her column.  Eordogh’s writing itself is fun to read as she adopts a voice she has called “a street critic, and critics in general are supposed to be haughty.”

The former Director of the Milwaukee Art Museum, Russell Bowman, consistently presents high quality examples of major artists.  Over the summer he presented an American printmakers exhibition, then the aforementioned exhibition "Women" featuring work by Ed Paschke, and then a self-taught artist show "Castle/Yoakum/Steffan" featuring those artists.  Refusing to yield to a New York-centered version of art history, Bowman is a consistent champion of Chicago artists.  Case in point, the current exhibition up until the end of the month is "Chicago! Chicago!"

Posted by Abraham Ritchie on 12/27/10
RELATED ARTICLES
COMMENTS (1)
Deb Sokolow
Western Exhibitions is a must-stop for art in Chicago. I didn't get to Deb Sokolow's show there, but did see a piece of hers recently at Hyde Park Art Center, and was duly impressed--she's found that sweet spot between writing and drawing where one supports the other, even needs the other. Many text-based works I have seen are merely literature plopped down in a visual arts setting, and therefore kind of pointless.
Comment by: k.a. letts on Sunday 01/02/11 at 12:33 AM
ArtSlant has shutdown. The website is currently running in a view-only mode to allow archiving of the content.