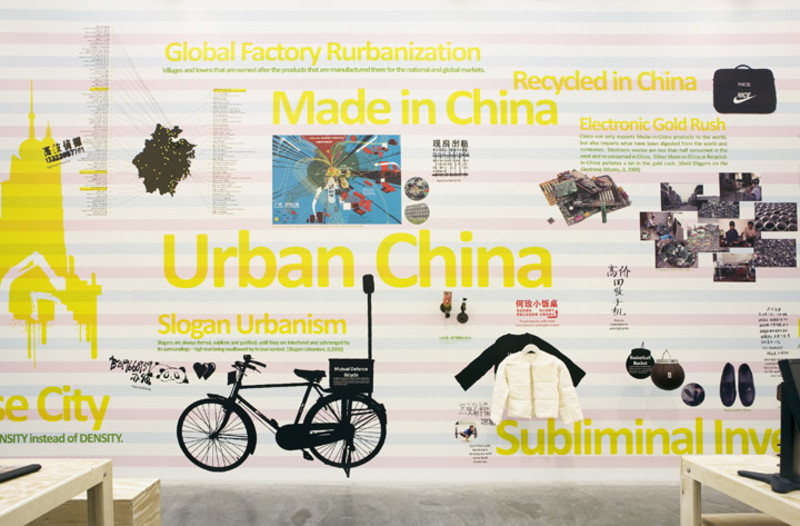 Snuggled into the corner of the Museum of Contemporary Art’s (MCA) second floor is a fascinating exhibition, “Informal Cities” that focuses on methods of organizing information. In the modern West, the urban has been a critical site of theoretical and experimental thought throughout the last century, coming to a head with the iconic publication of La révolution urbaine by Henri Lefebvre in 1970. Following the student upheavals of May ‘68, the urban announced its importance with a shout and a shake, though the revolutions themselves, by most accounts, failed. The city, always a site of the neglected, forlorn and forgotten, suddenly became a place of truncated possibility but with this knowledge a pragmatic optimism grew to replace the complacency and lost dreams of the urban utopia envisioned since the birth of modernity. The urban had to be formalized. But there is a dialectic between the formality of urban planning and the informality of social need. Georges-Eugène Haussmann and his style of architecture became a descriptor for urbanization in France due to its enforced formality, this exhibition, on the other hand, successfully represents the dialectical nature of urbanization that Lefebvre refers to.

Urban China, China’s foremost magazine on urbanization run by artist Jiang Jun, provides the content and basis of this exhibition curated by Benjamin Godsill. Shown at the New Museum in New York as well as the Hammer Museum in Las Angeles as part of The Three M Project, this specific installation compares the planned urbanization of Chicago with the formal and informal urbanization of China, unsuccessfully. Yellow papers taped haphazardly on the exhibition walls like Post-It notes appear as an ad hoc after-thought that only distracts from the excellence of the “Informal Cities” installation. Basically, just ignore the Post-It notes and download the Chicago .pdf from the MCA’s website instead.

Taking the form of pages on a wall, this exhibition provides an inside look at the development of urbanization in China. It begins with China as an enclosed society that has developed its own form of internal organization, from the Great Wall to Mao Zedong’s Cultural Revolution, and the informal forms of organization that cross-cut the more formal methodologies of restraint.

It [a dialectical analysis] is a way of illuminating an urban society, with its immanent dialectic, which extends past and future along a new plane. Perhaps, through this unitary and differential thought, we will enter a period that is no longer part of history, a time when particularities confronted one another, when uniformity struggled with heterogeneity.

This form of analysis is exactly what Urban China accomplishes in its pages. Godsill draws attention to this with one example of contemporary urban design. As older buildings and their land are cannibalized to create new high rises, the top floor is often left unfinished by the developers. The roofs of the former buildings cap the new high rise, bringing past and future into a new alignment, a “new plane.” The formality of International Style apartment buildings are informally modified to determine a space representative of the contestation that is urbanization.

Gatherings, encounters, and meetings (although not without their specific conflicts) would supplant the struggle between separate and now antinomic elements. In this sense, it would be posthistoric.

The conflicting space of the urban, with its antinomies of formal and informal, in its unification through designation (a city is named and therefore made whole) resolves itself. Its very existence as an entity is dependent on a posthistorical understanding that allows for the dissolution of certain boundaries and classifications in favor of the real. Reality in an urban space is one of practicality. The historical separations that were operational in another space must fall under the heavy hand of the inhabitants and thus a legacy of contestation is traced through the streets and facades of the urban, a constant negotiation between what is needed and what is wanted.

Posted by Joel Kuennen on 11/29/10
RELATED ARTICLES
COMMENTS (0)
ArtSlant has shutdown. The website is currently running in a view-only mode to allow archiving of the content.