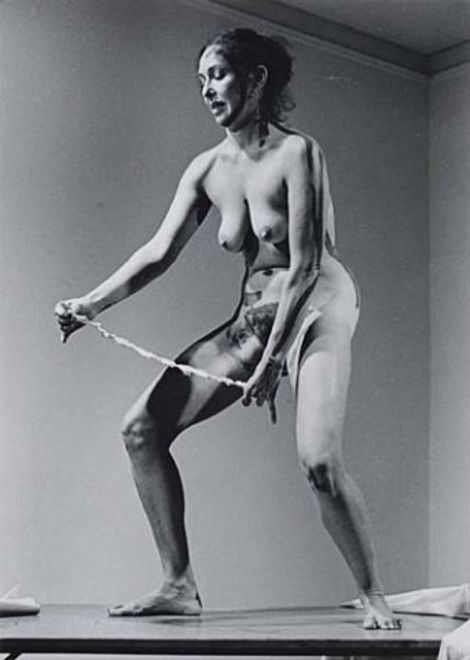 The other week, I was speaking to a friend over a drink. A graduate student at the School of the Art Institute of Chicago, he mentioned that a fellow student’s performance documentation had gone viral on YouTube. Intrigued instantly, I asked what it was about. “A girl pees and lets SpaghettiOs drop from her vagina onto the floor” came the reply. Well, I had to watch it and yep, that’s what it was. What was interesting to my friend, however, was the reception the video received from the trolling community and the artist’s response to this kind of public forum.

Interior Semiotics has become a work through its reception online, albeit, unwittingly (just read the interview with the artist on Rhizome). The type of reception it has received, mostly negative, rarely addresses the content of the video. Hardly as provocative now as its namesake was, Interior Scroll, 1975, by Carolee Schneemann, performance image seen at top, the majority of the negative feedback, attacks against hipsters, etc., revolves around the audience members and their reactions as they are prominently featured in the video. Anonymous, who conducted the Rhizome interview, likens it to a class consciousness flare-up, saying, “[The reaction to Interior Semiotics] stands at a nexus of hot-blooded issues; issues relating to class, status, accessibility, belonging and not belonging.” Yet, what does seem to be ignored is the collaborative nature of the work.

As I said before, this has become an artwork through its reception online. As the performance and reception is archived by sites such as http://knowyourmeme.com/memes/interior-semiotics, http://encyclopediadramatica.com/Spaghettios, rhizome.org, and the artist herself, the meaning expands and therefore the work does as well. Performance art in the age of the internet provides the best proof yet that the value of a work lies in its reception, not in the artifact. Performance, in an interactive public arena such as the internet where the viewer is also a maker, ensures that a work is never complete. This creates the illusion that the workings of time are sped up and consequently shifts the chief interest of the art historian to aggregation.

Posted by Joel Kuennen on 11/29/10
RELATED ARTICLES
COMMENTS (0)
ArtSlant has shutdown. The website is currently running in a view-only mode to allow archiving of the content.