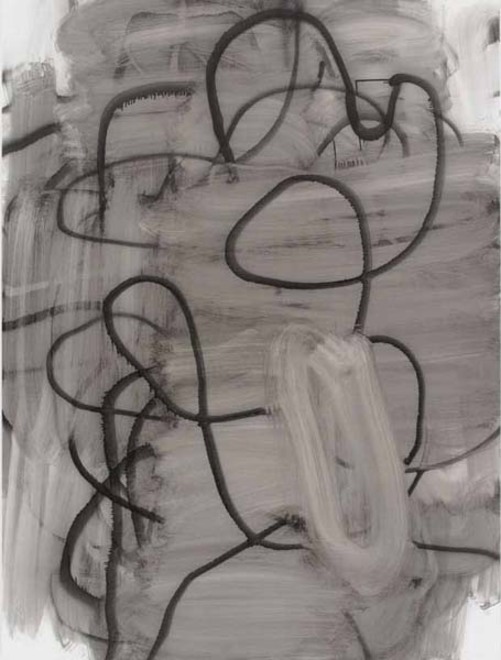 Christopher Wool grew up in Chicago, but he made his career in New York. And like any good New York abstract painter he is a fan of jazz. “Sound on Sound”, at Corbett vs. Dempsey gets its name from a recording made on an old Sound on Sound reel-to-reel portable tape recorder by underground jazz legend, Joe McPhee. Both Wool and Corbett vs. Dempsey are huge fans of McPhee, and the occasion of the exhibition marks an opportunity to issue the previously unreleased 1968 recording and stage a concert. Or the record’s release is an excuse to have a Christopher Wool show. Wool designed the CD cover and the exhibition’s ad that appeared in Artforum using material related to the Sound on Sound session, such as the annotated label on the tape’s box.

What does this have to do with the work in the exhibition? Nothing really. The catalog’s analogy that Wool’s use of layering paint on top of screen printing in the works on paper mirror McPhee’s technique of overdubbing tracks on the reel-to-reel recorder is a comparison that could be made between just about any painter and recording artist.  The only pertinence here is the artist’s and the gallerists’ fandom.

There has always been a relationship between visual art and music. Artists often use their love of music for inspiration and sometimes even incorporate music into their art with varying results and successes. But with the work of Christopher Wool, the jazz connection seems extraneous and useless to a viewer not interested in free jazz. The two aren’t mutually exclusive, if you like Christopher Wool, you don’t necessarily like jazz. And you don’t need to know about jazz or the history of Joe McPhee to “get” these paintings. So what’s to “get” in these paintings? I’ll get to that in a minute but here’s a hint: they are pretty much about what abstract paintings have been about since the New York School days.

The works are somewhat encumbered by the space. The gallery has strategically placed speakers everywhere that pipe in smooth jazz, folk rock and other selections at a low volume.  This, along with the creaky wood floors and exposed brick walls, gives the gallery a feel more of an upscale coffee shop than an art gallery. Corbett vs. Dempsey’s resistance to build out the space into a white cube is understandable, but hanging the 6 by 4.5 foot works on paper on the slivers of wall between the windows is confounding. This kind of quirky hanging made a little more sense with the work of Albert Oehlen that the gallery showed in 2009. But these oversized framed behemoths seem clumsy and like a painful joke in Wool’s show.

On the other long wall, a stretch of bare brick, the effect is quite different. The three untitled paintings (all enamel on linen, 2009) hang close to one another, unframed, from wires. The result is a sensation of immediacy, rawness and freshness. Hanging on stark white walls and spaced further apart they would have the patina of a white cube by creating a vast distance between the moment of making and the moment of viewing. But here, taking up most of the wall, they are close to the viewer. You can walk right up to them and enter their space; it’s almost impossible not to be in their space. This makes them feel more alive and present.

The works themselves are great. Wool’s main veins of painting (almost always black, white and gray; and always on a white ground) include stenciled text, abstractions that involve screen-printing and line drawing made with spray paint, and most recently, direct painting with sections rubbed out. To me, their strength has always been in their relationship with, and juxtaposition to, one another. The pieces on view in “Sound on Sound” fall into the last two categories of Wool’s painting approaches. The four untitled works on paper (all from 2010) begin with grounds made from cut-up reproductions of previous paintings, screen-printed on in a half-tone pattern. On top of this Wool has applied enamel paint, working it with a roller in one, in another smooshing it with corrugated cardboard.

Especially looking at the enamel paintings on linen I wonder: is this any different than classic Abstract Expressionism from the 1950s? The line work and paint handling repeatedly brings me to de Kooning. The triumphs and pitfalls of paint on paint all still seem to be there. Even with the incorporation of spray paint and other materials not necessarily used in the ‘50s, for painters today the game is still the same: “Oh that mark is nice,” “that drip is sweet,” “The way that bit of frantic smudging sits on top of everything it cancels out is great.”

I wonder if we tend to think that abstract painting today, in the second decade of the second millennium, is some how a different thing than it was in the middle of last century. That by virtue of being made in the era of live streaming video it is something else. Maybe there is an inherent declaration made by creating hermetic abstractions that only point to themselves. But weren’t there all sorts of political and technological issues contemporary to Pollock and de Kooning that didn’t make it into their work? Standing in a gallery, looking at jazz-inspired drips, whether it’s 1950 or 2010, a sexy brushstroke is a sexy brushstroke. The world changes, but the problems of painting stay the same.

Posted by Erik Wenzel on 11/15/10
RELATED ARTICLES
COMMENTS (0)
ArtSlant has shutdown. The website is currently running in a view-only mode to allow archiving of the content.