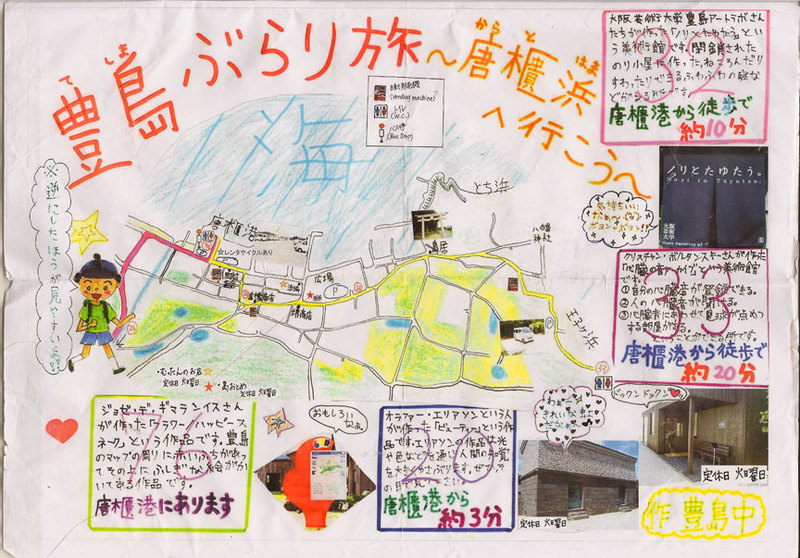 Ever been to an eccentric billionaire art-lover’s island experiment? I hadn’t either and surprisingly, it was pretty cool.

This past month, I found myself on a large ferry with about ten other people leaving the port of Okayama and heading to an island in the Inland Sea of Japan called Shodoshima, a member of the Setouchi Islands. It was an overcast day, like most other days that week. Rain came and went, misting in between, as we crossed the calm Seto Sea. I was headed to the Setouchi International Art Festival, a grand “utopic” vision conceived of by magnate Tetsuhiko Fukutake and now being organized by his billionaire son, Soichiro Fukutake.  The festival, on view from July 19 – October 31, 2010, was of an amazingly wide scope: 76 installations amongst seven villages and one city over eight islands. Setouchi International Art Festival (SIAF) may not yet be another Venice Biennale (a better acronym could help), but it represents the culmination of a much longer project that has no reason to end.

Billed as a reaction to the globalizing nature of contemporary society by its Chairperson, Takeki Manabe, SIAF has nevertheless garnered some criticism in its proactive guiding of the local economies. Many locals believe that most jobs brought by the festival are taken by young people from the city who will just return home after the festival, taking the money earned back with them. Tourism has definitely increased since the beginning of the festival but many residents seemed to refuse to take monetary advantage of this influx. This string of volcanic islands was first settled around 9,000 years ago. The picturesque seaside villages retain a feudal charm and many inhabitants still earn a living either fishing or working in failing factories out of sight from the art locales.

I had been in Japan for three weeks, mostly in Tokyo, and I was beginning to wonder how Japan had gained the economic reputation it seems to have. In the past few weeks, a few articles have come out calling the United States’ worsening economic condition “Japanification.”  The most recent is a piece in the New York Times that warns of deflation and points to Japan as a scary example of just what might happen in a lazy-consumer economy. American economists, of course, readily declare, “We’re not Japan.”

Tokyo itself is a breathtaking example of a consumerist economy functioning at a highly efficient and relatively dynamic level making general hardship difficult to spot. But I found that Southern Japan was a different story. Once a vacation spot for many from the north, it was apparent that there just weren’t as many tourists as there used to be.  With this in mind, I found it interesting to consider the Fukutake focus on the beneficial codependence of culture and economics – and the festival’s experiment in cultonomic synergy, if you will.  Takeki Manabe, in his greeting to the festivals visitors, put it like this:

In today’s globalizing world, with increasing homogenization and streamlining, [these] islands are losing their unique characteristics because of an aging and decreasing population…and the decline of the local area’s vitality.

This statement mentions two key-phrases that haunt Japan’s self-image at the moment: stagnant population growth and economic vitality. There’s a lot to be said about the symbolism and terminology applied here (mainly an allusion to the country’s virility and sexual prowess) but that’s for a different essay. The goals of this festival were many: bypass a stagnant domestic market through tourist infusion and bolster the economies of the islands, as well as to make a name for Naoshima and the Setouchi Islands as a world-class arts center. I was excited about the placement of art by some of the greats working today amongst the beautiful kitsch of Japanese fishing villages, tatami mats and rice paddies.

Arriving through the mist at Shodoshima, the “Island of Olives,” a small car waited for my companion and me to take us to the hotel. About 45 minutes later we were handed complimentary art festival pins and a plethora of guides at the front desk. The sun was setting so we stayed at the hotel and took advantage of the rooftop onsen.  An out-of-use helicopter pad could be spied beyond a moldering water slide and pool complex on the far side of the hotel, one that had passed its heyday and could not be found on clandestine websites at discounted rates.

Rising to find a heavy rain, we hopped a ferry to Teshima. Disembarking, we and about 40 others herded over to a small bamboo shelter that acted as a sort of welcome center in the small village. We were given hand-colored maps of the four artworks in the city. We pointed our umbrellas in the direction we were to head and went quickly.

Right. Down a small alley. Left. Down a smaller alley to a rain-drenched courtyard. A small blue tarp whipped on four polls; we huddled underneath. A small black curtain was pulled and we were beckoned in. There was a citrus smell in the air, like lemon pledge.  To the right was a small, black room with a fine mist spray in the center of the room.  Then, I saw it: the slightest, fuzziest little rainbow in the middle of the mist. Meet Olafur Eliasson’s Beauty 2010. I stared as long as I could, confused and awed..

Next, we wandered down some more alleys following the yellow line on the map which began to turn transparent in the rain. Again, out of nowhere, a small blue sign with a number beckoned and we entered a doorway to find Art Project Laboratory, Osaka University of the Arts, Swaying with Laver 2010. Taking off our shoes, we were led onto a long stage. On the right, a white cloth has been pulled over conical mountains; the guide instructed us to lie down. Sinking into the white fabric, a childish smile came instantly to my face. A few other people came in and everyone crawled to their own private valley between the snowcapped peaks and waits. A soft glow began to emanate down from the summits, swirling around, growing in complexity as an expected minimalist/experimental soundtrack accompanied. We lay in there for probably close to twenty minutes before the trip was over. I was electric! What a thrill to feel the work shift to accommodate and bring you into its world. I was experiencing a completely different spatial relationship with the work of art; I had become it. The viewer becoming the viewed isn’t a new thing, but this work was different in that I was not represented in the work, so to say. I was present in the work for a period of time and then it was reset. I left no marks, no traces.

Two for two and the rain hadn’t let up. Trudging on, we walked along a beach to find the third site, Christian Boltanski’s brilliant Les Archives du Coeur (The Heart Archive). A line of umbrellas extended out from the backdoor of a tiny house perched on a sand dune overlooking rough seas. The rain began to beat harder and I could hear my toes slosh around in my shoes. We bailed and caught a bus to the next port village on Teshima where we lunched at Tobias Rehberger’s Was du liebst, bring dich auch zum Weinen (What you love, also brings you to tears). In the style of his Golden Lion-winning contribution to the Venice Biennale in 2009, Rehberger took over an existing house near the harbor. As the judges from the Biennale put it, “Rehberger [takes] us beyond the white cube, where past modes of exhibition are reinvented and the work of art turns into a cafeteria. In this shift social communication becomes aesthetic practice.” Here, the communication occurred through quick stabs and elegant flairs of chopstick pairs in a ballet of signs that would have made Barthes proud. Transforming it into intersecting and converging fields and lines that not only suggest speed but emit an energy, Rehberger succeeded in creating a work that gave respite from the heavy gray clouds that waited outside.

Onto another ferry and off we went to Ogijima and Ogi Port, a small village that was packed with work at every turn. Jaume Plensa’s Ogijima’s Soul served as the Welcome Center. In what has come to be his signature, characters from the worlds languages combined to create sculptural forms in an architecture of letters.  Inside the center hung three sculptures by Takasha Imura called Karakurin. Little steam-punk fish peddled by metal-bird-men squeaked out a soothing rhythm but we had no time to waste being soothed.  Outside, the rain was beginning to slow down and the black and gray stones that this town was built of showed darkly amongst the green vegetation. We moved on and came upon a micro-settlement: Nakanishi Nakai’s A Town Between the Sky and the Sea, was a series of interconnected houses clinging to the stone wall, the Robin’s Egg Blue paint a gesture to both the sea and sky that surrounded me at that moment. Moving on, we walked down some smaller streets, into a courtyard, past a ripening garden and found an old barn with an old coop and stable. Little jingles sounded at irregular intervals, and then all of a sudden I saw it. Little white feathers spasming one at a time, Sound Scenesijima by Akinori Matsumoto.  At once gorgeous and haunting, I could hear these little birds tinkling the rest of the afternoon.

Our next find took us underneath a bamboo canopy into an enclosed courtyard. In the center was You & I [Nawa] Pillar 2010, a spiraling quilt that reached up towards what should have been a Robin’s Egg Blue sky. This sculpture project orchestrated by Mariyo Yagi brought together residents of the area to help create the massive pillar. Beyond this lay another doorway. I stepped in, took off my shoes, and stepped up to a white plane dotted with what looked like giant papier-mâché gumballs. Some were broken open, others still whole. Bright colored spheres were frozen in time, not moving, not changing. They were covered in pictures from movie posters and magazines, hand-written notes sometimes. When they were peeled back, more images and more text all the way down to the core. A Shelter for Drops of Memory by Takeshi Kawashima & Dream Friends filled the small rooms with a joyfulness somehow still bound to nostalgia, like going through old toys or a forgotten box -- the physical object heavy with meaning.

We were able to see about 20 pieces in all and I’ve only been able to address a fraction of the great work at this important new festival that will stick with me for a long time to come. Like the seduction of a treasure hunt, this festival amazed and amused.

SIAF runs through October 31st and will return in three years. You can bet I’ll be there to check on this happy experiment’s progress.

Posted by Joel Kuennen on 10/19/10
RELATED ARTICLES
COMMENTS (0)
ArtSlant has shutdown. The website is currently running in a view-only mode to allow archiving of the content.