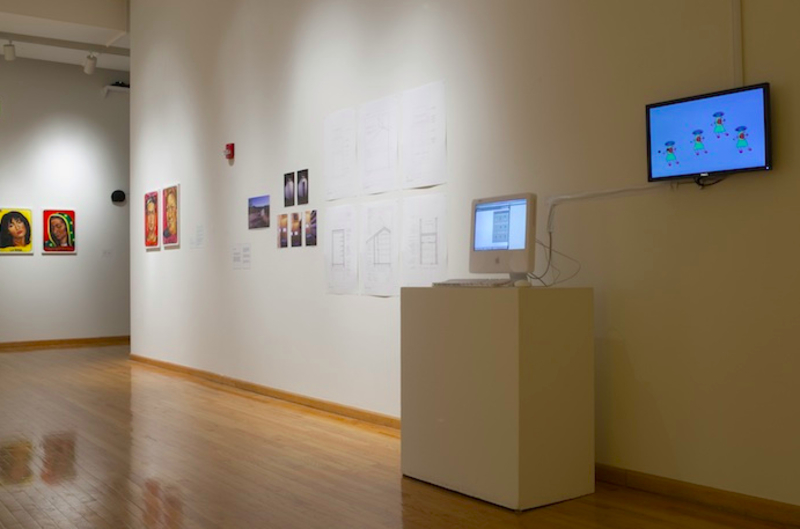 Since the early 19th century, La Lotería, or lottery, has been a popular game of chance in Mexico and Central America. Similar to Bingo, it’s played with a deck of 54 named and numbered cards, each displaying a vivid pictogram. Along with regional variations of the decks, individual Lotería callers often imbue each game with unique phrases for each card that run the gambit from rhyming poetic verse to singular, surrealistic epithets that either illustrate or belie the imagery of the card in play.

“Mano/Mundo/Corazón: Artists Interpret La Lotería” includes both individual artworks culled from disparate sources as well as discrete bodies of works that have previously been shown together in prior exhibitions at the Sioux City Art Center and the San Francisco Center for the Book.

As Jessica Cochran, Curator of Exhibitions and Programs, notes, “Mano/Mundo/Corazón” expands upon the Center for Book and Paper Arts’ (CBPA) focus on books and works on paper by including collage, print, cut-out and letterpress pieces alongside a diverse array of media, including film, video, photography, installation, drawing and painting.

Contemporary artists in the exhibition not only re-image the traditional Lotería cards, they also reinterpret them.  Luis Delgado’s Cosmological Lottery features a set of black and white photographs that mimic the look of La Lotería, but they also draw inspiration from other more mystical sources, such as the Tarot card.

Robert Ransick’s Casa Segura, pays oblique homage to La Lotería through an interactive computer program that is available to visitors of his Safe Houses. These structures, represented by architectural plans and documentary photography in the exhibition, are built on private property in border states between the US and Mexico, and function as safe havens containing power bars, water bottles and blankets, among other things, for those crossing the border between the countries. Politicized artistic intervention has a historical precedent in La Lotería; perhaps most famously, the renowned Mexican printmaker José Guadalupe Posada harnessed the illustrative graphics of the game for agitprop ends.

Hailing from the Bay Area, CBPA Director Steve Woodall puts his West Coast expertise to work for the exhibition with the inclusion of the Los Angeles-based Aardvark Letterpress. The precision of the Lotería deck they printed, containing work crafted by individual artists, comprises a highly personal, Los Angeles-specific suite of cards. And while they follow a uniform size and letterpress format, they range in subject matter from moments of quietude and abstraction provided by Karen Kimmel’s Espejismo, to comedic absurdities such as Mel Lim’s Tokyo Pequeño; from the Hollywood sign (Casey Ryder, Las Colinas) to the urban transvestite (Rick von Dehl, El Travestido), to the drive-by shooting (Dave Lefner, El Inverso) and the masked Mexican wrestler (Richard Duardo, El Luchador).

Several dozen newly commissioned works flank these in grid-like formations that suggest the actual layout of a deck of La Lotería cards in play, and feature imaginative reflections on traditional cards, such as Michael Velliquette’s brightly colored and pearlescent fringed paper cut-out La Corona (seen at right) and Maria Gaspar’s transgendered mermaid. And this is to say nothing of the mobile Changarrito cart with tee shirts, posters and handbags available for sale.  The three-dimensional structure is made of glass and wooden ruler-framed paper cut outs, and a floor-to-ceiling diptych made of tissue and construction paper, installed over a poppy mosaic of semi-visible latex paint applied directly to the wall behind it.

“Mano/Mundo/Corazón” does an excellent job of illustrating how La Lotería has been absorbed and utilized by artists in the course of their art making practice, and also goes a step further by engaging a new batch of artists to create work that explores the imagery, history and function of the cards. This sense of discovery, or re-discovery, of La Lotería hung in the air on opening night of the exhibition as many viewers were familiar with La Lotería but were first time visitors to CPBA, mingled with the artists, CPBA staff and Columbia Book & Paper Arts graduate students. And regardless of the medium or manifestations of La Lotería in the voluminous works on view, “Mano/Mundo/Corazón” effortlessly evokes the playful spirit of the game and the thrill of its chance operations.

Upcoming events in conjunction with the exhibition include: Critical Encounters/Cafe Society: Image and Implication in La Lotería, Tuesday, October 19: 5-7PM. All images on this page are courtesy of the Center for Book and Paper Arts and used by permission.

Posted by Abraham Ritchie on 10/4/10
RELATED ARTICLES
COMMENTS (0)
ArtSlant has shutdown. The website is currently running in a view-only mode to allow archiving of the content.