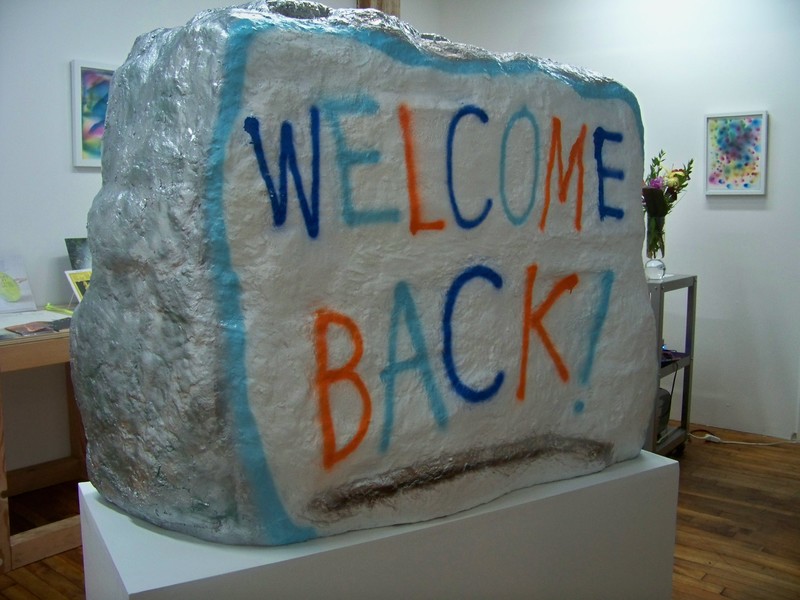 It always strikes me as ironic that the most popular day for art, the beginning of the art season’s opening night, is also the worst day for actual art viewing.  Throngs of people pack galleries to see old friends, network with new ones, get drunk, get laid, and maybe see some art in there as well.  Opening night is usually about the energy of the crowd, first fuelled by alcohol, then by art.  I live by the rule that the fall season openings are ma

ndatory for Chicago art writers, to get a feel for the art crowd, the new art, and what shows to go back and see when the crowds have gone and you actually have a chance of comfortably contemplating some work.

My night began in the cavernous space of the Sullivan Galleries, located on the seventh floor of the Sullivan Center, with a reception for no less than five concurrent exhibitions: “Process in Product: Work from Summer Studio,” “A Fickle Existence,” “The Joke is Irresistable,” “Materials of the City,” and “Still Action.” It was not immediately obvious where one show ended and the other began or which exhibition was which, to the detriment of the exhibitions themselves.  The result is that the entire floor reads like a pretty good MFA show.

Like an MFA survey, standouts in these shows were immediately obvious.  Identical twins and artists, Alan and Michael Fleming were included in no less than three exhibitions.  Their makeshift studio complete with working ideas, successful ideas and many more that ended up in the waste bin are on view in “Summer Studio.” Two of their video pieces, Building a Box in Our Studio, Balancing, Opening, Levitating were included in “The Joke is Irresistable.” Balancing, Opening, Levitating consists of three monitors that, respectively, show the artists interacting with cans of Budweiser, watch a excerpt of the video on their website, still seen above. For Balancing they drink a portion, then balance the cans on edge together, in Levitating the cans are attached to balloons and they drink an amount so the cans hover in air, Opening reveals that the cans are upside down (though they appear to be upright), when the artists crack the Bud cans open the beer flows out.  The work combines the physics of Fischli and Weiss, the bronze beer cans of Jasper Johns and the formalism of Félix González-Torres into something completely new and interesting.  Works by these artists also appear in “Construction Site: Identity Made Material,” located in the newly christened SAIC Boomerang Space on 37 S. Wabash.  There’s no doubt in my mind that these are artists to watch in the coming years, in fact, I won’t be surprised if I see a gallery devote a show entirely to them to open the next fall season.

Marissa Benedict and Luis Palacios as GRAFT. CCES 001. 2010. Image courtesy of the artists.

Also on view in the Sullivan Galleries, as part of “A Fickle Existence,” is CCES 001 a work by Marissa Benedict and Luis Palacios, showing together as GRAFT.  Last month I went on record (via Twitter) as saying the only bio-art that interested me was bonsai, I was being facetious to a degree but also implying that for all the “newness” of bio-art, living art has been around for centuries as part of Eastern culture.  CCES 001 consists of a custom climate control system that houses a Japanese bitter orange tree in bonsai-like training.  The tree is experiencing an early fall as the artists intend to induce winter dormancy and then spring blossoms, via the climate control system, putting the tree into a rhythm opposite of the seasons.  They’ve taken the vitrine aesthetic of Damien Hirst and turned it into something far more nuanced.  You can follow their progress, and their tree’s progress on their website, I hope to see blossoms in the winter—it will be the perfect antidote to the snow and freezing temperatures.

From the Sullivan Center, I was off to the West Loop accompanied by ArtSlant Writer Mia DiMeo and others.  The first stop was the 835 West Washington building that houses the excellent whole-name galleries: Thomas McCormick, Carrie Secrist, Kavi Gupta and Andrew Rafacz.  Carrie Secrist was my first stop where I also ran into fellow art critic Pedro Vélez.  Secrist was showing Megan Greene’s “Audubon Drawing Series” in which she alters Audubon bird prints with various media (seen at far left).  I didn’t care for these much myself but Mia did.  More to my liking was Carolyn Ottmers’ “Splice” show, also at Secrist, in the rear gallery.  Realistic steel sculptures of weeds and other plants hung from the ceiling in a slightly hallucinatory effect (seen immediately at left).

From Secrist, it was upstairs to Kavi Gupta Gallery who opened the season with an exhibition by Chris Johanson.  Writer Joel Kuennen has the scoop on that exhibition for ArtSlant, so all I want to mention is the show Johanson curated in the side gallery titled “The Color of Black & White.”  Dedicated to black and white photography, this intimate exhibition introduced me to the photos of Masao Yamamoto whose small pictures of nature were a moment of serenity on an otherwise hectic night.

Kavi Gupta is also showing work across the hall in a project space that’s usually hung pretty tightly.  There were two photographs by Melanie Schiff that had debuted to open last year’s art season.  But the eye-catcher was a large abstract canvas by Angel Otero (not shown).  Not surprisingly it was marked “HOLD.” The Chicago-trained artist has recently moved to New York City, scoring enviable gallery shows with no shortage of admiration and interest.  In my conversation with the artist, Otero talked about his passion for abstract expressionism and it seems he has found a way to work that passion into his style.  The result is nothing short of stunning.

Next door is Andrew Rafacz Gallery, where I met ArtSlant Writer Robyn Roulo.  Rafacz opened up the season with an exhibition of Wendy White’s new work, and Pedro Vélez is calling it, “One of the best shows of the weekend.” White has begun incorporating text into her work since I last saw it.  The result occasionally reminded me of Ed Ruscha’s various studies of the Hollywood sign, but I still want more time to study the work.  The gallery was less crowded than others, meaning one could actually see the work, but the irresistible urge to continue on drove me forward.  A return trip to Rafacz is in order.

From there, it was downstairs to Thomas McCormick, one of two galleries that are beginning their season with a show by Bernard Williams (the other is Iceberg Projects, opening September 18th).  Williams’ show at McCormick is entitled “Mine(d) Museum” and gathers together sculpture of various kinds, mainly along the lines of detritus or found objects.  I didn’t spend much time in the gallery; it was packed and very apparent that really seeing the show would require time and careful looking if one was to find relations between the objects.  Another return trip . . .

Just before I was leaving the building I ran into ArtSlant Writer Erik Wenzel and we were both surprised by former ArtSlant Writer Kathryn Born, sporting white go-go boots, and who now runs the Chicago Art Magazine family of websites. We had a brief on-camera interview that may turn up on their site.

In the neighboring building is the new home of Tony Wight Gallery, having just recently relocated there.  Their show of Arturo Herrera and David Schutter made Erik’s picks for the new season, but when I got to the second floor it was literally packed shoulder-to-shoulder.  So I left.

From there it’s just a block north to the 119 N. Peoria building.  First on the list was threewalls, showing the work of Kelly Kaczynski. This was yet another case of feeling like I needed more time to experience the work, and less people.  The large main gallery had two wooden constructions of what appeared to be a floor on a ceiling, all atop mirrors (seen at right).  This structure was accompanied by vitrines of objects and photos of people digging with shovels.  I definitely need to go back to figure this one out.

Down the hall is Western Exhibitions that started its season with shows by Ben Stone and Joey Fauerso.  On my second pass of the gallery, it was slightly less full so I wormed my way in.  I was glad I did, as these two shows were some of the best work I saw all night.  Stone’s show features a large sculpture of two men, one in a baseball uniform, one tattooed all over and another nearby about to pummel the daylights out of the man on the ground.

Pedro Vélez recently wrote a major cover article about Stone for Newcity that I’ve been meaning to read but haven’t gotten to it yet, after seeing the work I’m looking forward to the piece even more.  Accompanying the sculpture is a wall-relief of the nefarious Team Rocket from Pokémon.  Violence in sports and violence in cartoons; the process of normalization was apparent.  In the side gallery is Joey Fauerso’s “Act Natural,” containing video works and delicate watercolors.  The video works were a highlight (with the watercolors close behind) especially Clearing in which a flutist in a forest is joined by a twirling naked man.  As animated birds flitter overhead and the man spins, the stereotypes and clichés of the players, their roles and their setting becomes apparent.  It also reminded me of a recent article written by Alicia Eler and Patricia Herrmann on gender roles and nature.

I tried to get into Golden Age, the gallery/bookstore, but again I was denied by crowds of people.  Visible from the door though was a rock-like object that was spray-painted with the words “Welcome Back,” mimicking similar boulders on high school and college campuses that are routinely spray-painted with similar messages.  It was a cheery gesture that made me smile.

I wanted to make it over to Rhona Hoffman Gallery to see the new Kehinde Wiley paintings so I headed out.  The receptions are mostly scheduled from 6-8 p.m. but that’s usually been so they can start kicking people out by 9 without feeling bad.  I have to say I was shocked to find Hoffman Gallery locked at 8:03 p.m., it felt rather ungenerous and certainly unwelcoming.  The rumor circulating was that Kanye West and his entourage had shown up for the opening and they were getting a private showing.  I’ve asked Kanye via Twitter if this is true, to no response, but it also seems unlikely since he apparently was at Fashion’s Night Out in New York City that night (according to Twitter entries). I really hope Kanye was out though; Chicago’s art scene could use some celebrity energy (and money).  I never hear about Kanye, Oprah, Common, or Vince Vaughn going out to openings, and Oprah’s studios are literally a block away.

With the denial from Hoffman Gallery, I realized I had been denying my hunger by feasting on art.  I headed home to dinner, another art season begun and an opening night done.

Posted by Abraham Ritchie on 9/13/10
RELATED ARTICLES
COMMENTS (2)
Thanks Elyse, I've heard some good stuff about the Bramson show from different people!
Comment by: Abraham Ritchie on Thursday 09/16/10 at 11:16 AM
Hey Abraham.... There was a cool "Hot Art" encaustic exhibit at The Art Center at 1957 Sheridan Road in Highland Park. It was worth the drive...a scenic one at that. The gallery also featured a Phyllis Bramson curated show. Both were divinee. Take a look....it's still up until the end of September.
Comment by: Elyse Martin on Tuesday 09/14/10 at 4:52 PM
ArtSlant has shutdown. The website is currently running in a view-only mode to allow archiving of the content.