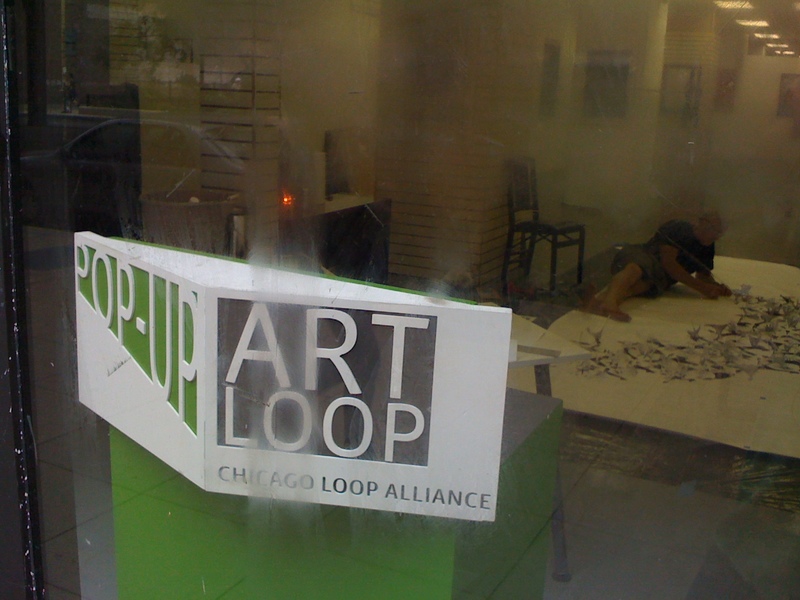 If you wanted to make a strong visual and cultural statement in Chicago’s Loop, leaving the growing stretches of empty storefronts as they are would be a far more unified and compelling expression than filling them up with arts and crafts.  What I do find interesting about Pop-Up Art Loop, an initiative of the Chicago Loop Alliance’s Foundation, is how it is a manifestation of urban renewal through the use of art.

The “Creative Class” is a term commonly thrown around to speak of the group of people working in the arts who are willing to live, work and inhabit areas of the urban wasteland that older, conservative and more professionally stable people avoid. It is often seen as the leading edge of gentrification. The creative class is a valuable asset to gentrification as it colonizes dangerous and rundown neighborhoods either populated by minorities and immigrants or left vacant by retreating industry. The creative class has no qualms about low income and neighbors with diverse and perhaps less desirable backgrounds. Members of the creative class open new and interesting businesses and perform a lot of the hard groundwork of neighborhood development.

Perhaps most significantly, and most intangibly, the creative class brings that all-important and difficult status of “cool” to a neighborhood. This is the final task for the demographic to perform. Once the reputation of an area is established, the members of another, wealthier demographic, say, “The Young Professional,” wander out the one or two stops further on the El. The cruel beauty of this whole act is that once an area has reached this point of gentrification, the creative class is only pushed out of the neighborhood it developed, just like the minorities or the businesses that left before it.

We learn this process in youth, most significantly as teenagers. In high school you have the kids that are constantly searching for new and undiscovered iterations of consumable culture–stores, music, movies and so on. Some of these discoveries make their way to the majority of teens who only accept a trend or fashion after it has been proven culturally viable through a broad popularity. This plays out on both a micro level, a local coffee shop or record store that becomes popular, and a macro level, a band that “sells out” and ends up as the musical guest on Saturday Night Live. At this point the first group has to look for the next new thing and the cycle repeats itself. And this group has to continue this cycle, because part of its defining character is a distrust and aversion to the mainstream. As the members of these groups grow up, these roles become more defined and codified, if less consciously so. Most people fall somewhere between the extremes, but this is a helpful model for looking at the way societies develop today.

So what does this have to do with the Pop-Up Art Loop? The project is “an initiative of the Chicago Loop Alliance Foundation” which is a “501 (c)(3) corporation, [whose mission] is to develop, support and promote artistic, cultural, and public events that benefit businesses, individuals and stakeholders within in the service area of Chicago Loop Alliance (CLA). CLAF is affiliated with Chicago Loop Alliance, which is a 501 (c)(6) organization whose mission is to strengthen the Loop’s competitive position as a mixed-use destination and to promote economic development and tourism in the Loop.” So it is basically what most philanthropy has evolved into today: not an enterprise where the support of culture is the goal, but where the support of culture is a means to end, the true purpose being to develop business and make a profit. Being seen as friendly to the arts is part of a good public image. And in this case, the benefits are more tangible and direct--in the form of increased sales.

The Pop-Up Art Loop is, in a sense, a good idea. Artists are encouraged to propose projects for the empty storefronts that pepper the downtown area. Members of the creative class get free space for a short period of time to do a show, have a studio or present work. The property owners get to present the image of an occupied and dynamic street level space as opposed to an empty one. Through this ostensibly selfless gesture of civic patronage, the Chicago Loop Alliance is hoping to enact class colonization itself.

The city center of Chicago is like a giant tree that is hollow at its core. As neighborhoods north, west and south of the Loop have seen growth in the last decade, commercial retail spaces in the heart of downtown, along Wabash and State streets and in the Loop, have struggled. Most notable in this regard was the closing of Carson Pirie Scott’s flagship store, which occupied a full city block and was designed by master architect Louis Sullivan. There was a high rate of vacancy in this area before the recession hit. That most likely has to do with the slow recovery from the disastrous scheme decades ago to turn State Street into a pedestrian mall. For our purposes, it doesn’t matter so much why stores are empty, as does the problematic nature of the project.

The Pop-Up Art Loop for all the rhetoric and no doubt good intentions of those involved takes art and places it in a position of subservience to commerce. In effect, art in this situation is just window dressing. The benefits are weighted toward the property owner and the Loop Alliance. Filling empty stores with all kinds of creative practice provides a valuable marketing tool, one far more persuasive to potential tenants and investors than empty gutted spaces. This makes the area appear more vibrant and lively. The stores are full of all sorts of colorful sights. They can be active, with people in the spaces working, making and installing. Other spaces have the appearance of a more standard business, wares are on display and a customer service representative (earning 10% commission) is there to answer all your questions. But this also communicates to potential tenants, the real quarry, that the Chicago Loop, and the city itself, is friendly, even proactive, to cultural values. “We support the arts.” This is a valuable selling point. Like the coveted “this neighborhood is cool” label.

But as art, it fits too well into the mechanism of culture as a signpost of value, as tool of economic development. This is why if you wanted a good expression of the times you’d leave all the stores empty for the observant person on the street conclude that they are literally inhabiting an economic depression.

Posted by Erik Wenzel on 8/30/10
RELATED ARTICLES
COMMENTS (0)
ArtSlant has shutdown. The website is currently running in a view-only mode to allow archiving of the content.