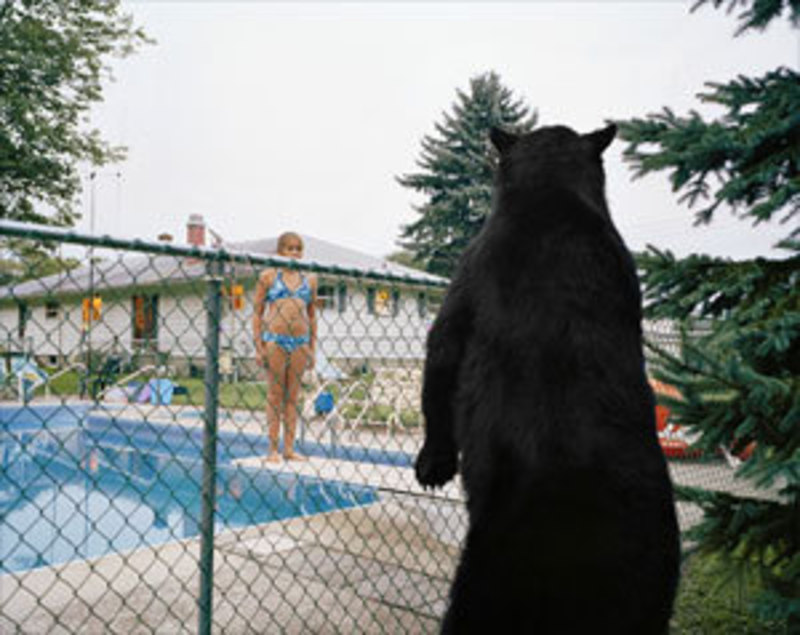 Life on the Lawn

On display at the Museum of Contemporary Photography (MoCP) through the middle of August, is "Beyond the Backyard" an exhibit examining the many roles that the backyard, yard and park play in American life. With a strong emphasis on American photographers, but also including several photographers from abroad, this exhibit primarily investigates the backyard in terms of its American identity from its heyday in the 1950s to the myriad of constructions we project upon it today. It should also be mentioned that this exhibit is a great follow up to the Walker Art Center's "Worlds Away: New Suburban Landscape," showing there until the middle of August and then at the Carnegie in Pittsburgh.

Curated by Karsten Lund, the Collection Research Fellow, this exhibit is large in scope and size but is quite successful in examining all the facets of the backyard. Leading off with two photographs by Dorothea Lange this exhibit frames its examination of the backyard in historical terms. The backyard is introduced through Lange's photographs of Mormon family gatherings as the site of just that: family. In the case of Lange's image, they are large, large families with many women holding many babies. The backyard and its relation to the family becomes the prime focus of the later photographs, particularly as suburban America develops.

The rise of the suburbs leads to a thematic concern explored in many of the works on display: the lawn. A green, lush lawn seems central to the mythic American Dream so it is not surprising that so many artists explore this topic. A carryover from the Walker exhibit was Greg Stimac's 2006 photographic series "Lawn Portfolio," installed more fully in MoCP to a much better effect. The images depict various people mowing their lawn, people so obviously different their only uniting factor is they are Americans mowing the lawn. An elderly man uses his ride-on mower while his neighbor's lawn has completely dried out. A middle-aged man with tattoos mows a weed-infested lawn with decrepit autos in the background. In none of these photos is the lawn truly lush or truly green but it is always in need of care as these figures struggle to reach a seemingly unattainable goal.

The idea of the lawn is developed further in other images on display. Particularly of relevance to us in the Midwest, and increasingly relevant to the entire world, is the documentation of the suburbs encroachment into Midwestern farmland. With grain prices breaking prices and world food prices rising across the board, these images of the world's best and most fertile farmland having sod laid over it take on extra poignancy. A photograph by Dave Jordano showed people constructing the ubiquitous lawn for their McMansion, while in the background are furrowed fields and farmland. The title of one of Bill Owens photographs said it all: Couple laying sod near Bloomington, IL. I bought the lawn in six foot rolls. It's easy to handle. I prepare the ground and my wife and son helped me roll out the grass. In one day you have a front yard. (1973). Wide-spread suburban sprawl has been going on for over three decades, or half a century in some places, and many artists are questioning the viability of this expansion.

Investigations of the lawn and the suburbs were only two of many themes that emerged in this expansive show. Briefly, the backyard as a site of childhood was apparent in Colleen Plumb's gorgeous image Magnolia (2005) of a backyard playset covered in Magnolia petals and the tree in full bloom. Avoiding nostalgia, this image presents the backyard as a perfect, dream-like area that we cannot re-enter and is undoubtedly better in our memory. Elsewhere Todd Hido had up two moody pictures that once again prove he is the Edward Hopper of photography. The exhibition even theorizes how city parks become the backyard of urbanites, showing four works from Kohei Yoshiyuki's series "The Park" and a park bench image from Garry Winogrand.

Beyond the Backyard is the kind of ambitious exhibit that exemplifies the vitality of all levels of Chicago's downtown cultural atmosphere.  When I visited the museum was crowded and with good reason, I wouldn't be surprised at all if this ended up going to other cities.

Posted by Abraham Ritchie on 7/28/08
RELATED ARTICLES
COMMENTS (0)
ArtSlant has shutdown. The website is currently running in a view-only mode to allow archiving of the content.