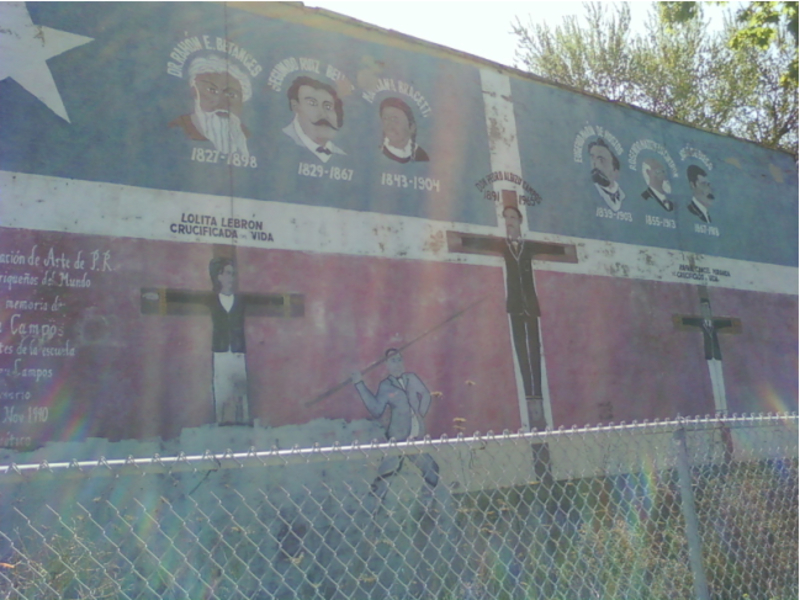 On the corner of North Avenue and Artesian Avenue, an eroding mural is painted onto the side of a three-story brick building. It depicts three crucifixions. On the left, Lolita Lebrón, “crucificada en vida,” (“crucified in life”) is the epitaph above her head. On the right, Rafael Cancel Miranda, with the same epitaph lying above his outstretched figure. Over the image of the man in the center, dressed in a black tuxedo with white trim and his gaze looking West off into the distance, is written:

The text arches over the apex of the cross like a stylized INRI. This part of Humboldt Park was once a Puerto Rican majority, touted as the continental capital of the Puerto Rican diaspora, but now the mural clings to the wall of a mortgage office and a coffee shop with a Häagen Dazs sign facing the sidewalk in front. Above the three crucified figures float the heads of other Puerto Rican patriots like so many martyrs and saints of a forgotten ideology.

I doubt many of the current residents of the neighborhood know whom these two-dimensional muraled martyrs are anymore, aside perhaps from a few who have lingered in the now heavily gentrified area between Wicker Park and Humboldt Park.[1] [2] [3]

Yet, this mural, aside from being the oldest mural in Humboldt Park and the second oldest in the city still holds a visual convulsiveness to it. Mixing nationalist and religious themes to create an arresting image that seems all but out of place to this author, himself an agent of the aforementioned gentrification. The story it depicts in allegorical form, however, was enough to persuade me to take a close look at exactly what this slowly fading image meant to the community who fought to retain it. A mural, after all, is public art that manifests visually the social condition of the community in which it resides.

Pedro Albizu Campos, the center figure, known as “El Maestro” or “Don Pedro” was once a famous politician and leader of the Puerto Rican Nationalist Party. A Harvard educated lawyer, he turned down many lucrative job-offers in the U.S. to live a life of sacrifice in support of an independent Puerto Rico. He actively resisted the colonial powers that dominated his nation’s economy and was repeatedly jailed for it, sometimes in Puerto Rico, sometimes in the United States itself.

In 1954, Lolita Lebrón, the figure on the left, organized and ultimately led an attack sponsored by Albizu Campos on the United States House of Representatives. According to the narrative, Lebrón, Rafael Cancel Miranda and others rendezvoused at Union Station and left together for the Capitol (Tovar, 1974). Cancel Miranda, the figure on the right, reportedly wanted to postpone the attack due to rain and the dark of night but Lebrón convinced the group to push forward, taking the lead herself. Upon entering the Ladies’ Gallery, Lebrón, Cancel Miranda and others said a quick Lord’s Prayer and opened fire on the 240 representatives in congress. Five representatives were injured; no one was killed. She and the others were imprisoned for the following twenty-five years until President Jimmy Carter pardoned the group.

She returned to Puerto Rico a legend and symbol to the cause of Puerto Rican independence. She died on the first day of this month, August, at the age of 90. There is now a film in the works based on her life. Eva Longoria-Parker of Desperate Housewives fame is the executive producer and will be acting in it as well.

Lebrón has achieved her martyrdom in this fashion, as the epitaph above her image on the mural of Humboldt Park indicates, she was crucified “en vida,” in life. She became a social symbol before her death and has entered the realm of narrativization appropriate to such cases in our world today. The social realm she represented in her activity as a resistance fighter was heavily political. With the future release of this film, entitled 1954, the social realm of her legacy will become a commercial one that will instead appropriate her narrative into a non-place of representation that will alter the role and purpose of her as symbol—from a symbol to inspire political rebellion to a supplementary role that will entrench that which already is. This is the true crucifixion of Lolita Lebrón in life and now in death, the stripping of her right to determine her own symbology and yet this is the effect of existence as a social creation. Once entered into the symbolic, even on a far lesser scale, one becomes subject to the social.

Albizu Campos, on the other hand, achieved a different sort of martyrdom or entrance into the symbolic of the social. While in prison in the ‘50s and ‘60s, he complained of being subjected to intense radioactive rays, an image of Campos in prison with the burns can be seen at right. The official narrative of the American-backed Puerto Rican government denied the accusations and reported that the man had fallen victim to mental illness. Dr. Orlando Damuy of Cuba came to examine him in Puerto Rico. After examining the burns that covered Albizu Campos’ body, Dr. Damuy concluded that he had indeed been subjected to intense radiation. This led to a furthering of Albizu Campos’ own narrative history. A dual-narrative developed, one of a morally compromised subject due to the subject’s own internal destruction (mental illness) and one of a physically compromised subject due to internal destruction caused by the United States government. Damuy, to fulfill his role, conveyed his findings through an interestingly colloquial exhibition of the effects of radiation. He placed a paper clip on the skin of Albizu Campos and laid a piece of film over it. The film recorded the negative of the paper clip, somewhat like a modern day Shroud of Turin with a dash of bureaucratic aesthetics, proving that Albizu Campos’ body in fact was radioactive and he himself a victim to the ultimate weapon of the modern West, the deconstruction of the atom into an energy blast of radioactivity.

In Henri Lefevbre’s The Urban Revolution, he introduces the category of non-place as an elsewhere, “now there is an elsewhere, the non-place that has no place and seeks a place of its own” (Lefebvre, 2003). Seeks is the operative term here. Non-places are not static spaces, not defined by their social context but directive and gestural according to the impulse of the single. French anthropologist Marc Augé interprets the non-place as places of transit yet when applied to the space of subjectivity, what is being sought is the subject itself. The single is the non-place of subjectivity, an elsewhere that avoids signification through being perceived as the origin of signification. What is interesting here, and perhaps the most profound alteration to the categories of subjectivity and space, is that they transpose positions at this point. Space and the subject become each other in the null space of an elsewhere.

So where does this mural reside? In what kind of space? Murals of all sorts decorate the sides of buildings throughout Humboldt Park but none with the political significance contained by the one just described. Roberto Clemente, surreal depictions of Puerto Rican foliage and flags, these are all normalized in this nationalistic and nostalgic community within the larger cityscape of Chicago.[4] They are normalized due to their gesture both to heritage and the space of a Puerto Rican subject in America. The subjectivity of this diasporic community is hybridized to an acceptable extent in that there is a reasonable dialogue that occurs between the imagined scape of these murals and the social imaginary of the subject. The Campos Mural is Other, however. The other murals are in perfect condition, well maintained with fresh coats of paint. The Campos Mural, it appears, has been forgotten even by the community it was meant to hail; the community it was meant to provide ideological meaning and therefore a space of social subjectivity to. Could it be that a mural of failed revolution and independence is just not valued by a community that must pragmatically negotiate their past with the social of their current space? The social ideology of revolution has been superseded by the stronger social ideology of hybridity and integration.

My interpretation of the narrative of Albizu Campos, the significance it communicates to me as a current resident of the neighborhood, is that what it marks is absolutely other than what it meant to those who painted the mural and those to whom it still produces memories and promises of an independent nation, failed or not. The social of these perceptions conflict to such an extent that the mural itself has slipped into non-place and lost any form of symbolic resonance and as it now fades and chips under the unforgiving revolutions of time as an image devoid of agency.

[3] This kind of demographic knowledge characteristic of modern ontologies has a two-fold purpose. Both to reify our conceptions of separateness by constructing colorfully bound microcosmic identity groups predicated on fear, class, race, culture, etc. as well as to explode these microcosms through individual resistance which comes in the form of necessary travel more than any confrontational resistance characteristic of political strategies. The second was not intentional. The derives of the Situationists took it as a mission of confrontational resistance to explore the urban through, sometimes, random marches through city streets and sewers. It’s a good image—isn’t it?—European intellectuals sloshing through flows of human waste in an attempt to capture the type of political agency was that once reigned? I like the idea of forced derives better. I am not seeking out agency, change, or confrontation. I seek to get somewhere I want to go, that is my only intent and yet confrontation is the condition of this movement, meaning movement is confrontation, an antagonism. Confrontation with the social, sometimes with the multiple and rarely, oh so rarely, with the double. The space of movement is that of possibility and all the fears and joys that abound in this forward-looking category.

[4] One need only visit Puerto Rican Festival of Humboldt Park to experience the kind of nationalistic fervor still practiced by this diasporic community.

Posted by Joel Kuennen on 8/23/10
RELATED ARTICLES
COMMENTS (0)
ArtSlant has shutdown. The website is currently running in a view-only mode to allow archiving of the content.