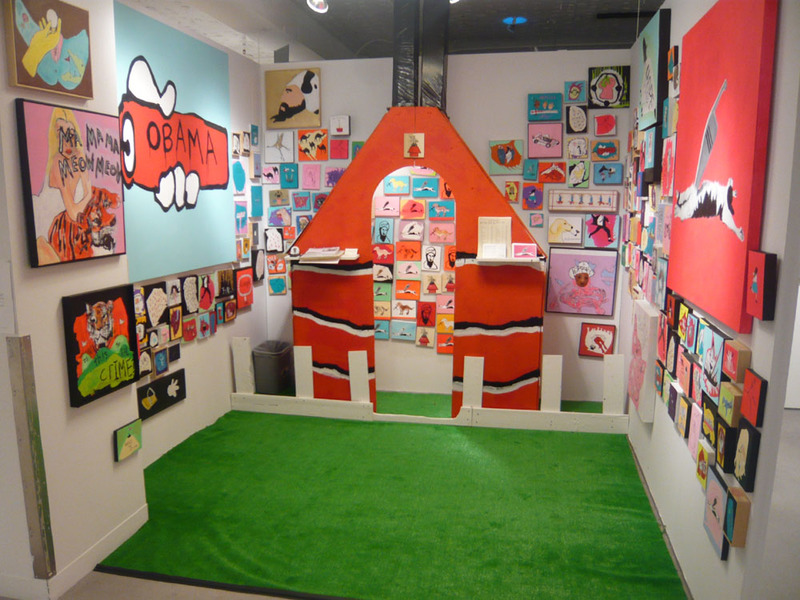 Brian Leo at Leo Kesting in NEXT

My stopover at Artropolis last week showed me one particularly obvious truism: art is thriving in America and beyond. On a Monday morning, the Merchandise Mart is packed to the gills with galleries from around the country, Europe, Canada and Japan. And the buyers, rapidly consuming the artwork like hotcakes, demonstrate that art is an ever-hot commodity in a world where the values of housing, bonds, stocks, and currency are in flux.

Financially and environmentally, our world is spiraling out of control. And violence is so imbedded in our culture that when it occurs we're more likely to document it with a cell phone camera than examine or protest its presence. Consider the media feeding frenzy on last week’s almost terrorist attack in Times Square and the murder-suicide in the Chicago Loop. Yet on the NEXT floor of Artropolis, I observed in the paintings of New York artist Brian Leo, and his refreshing statements about the current peculiarity.

At NEXT, the New York gallery Leo Kesting is devoted entirely to Brian Leo's works. Inspired by dreary topics such as cloning, sex addiction, Obama-disaffection, 9-11, Bird Flu, and Hurricane Katrina, Leo doesn't hesitate to illustrate the less-than-cheerful realities of our new millennium. Yet the artist tackles the plagues of our age with pretty pinks and baby blues, offering hope in the form of artistic irony and revelation.

Noble Peace Prize is particularly bold. In the center of a light canvas lies a red stick of dynamite being held by disembodied hands, the word Obama written across the dynamite in black-stenciled letters. The subject of course concerns the President picking up the Nobel just a week after deploying an additional 30,000 U.S. troops to Afghanistan. Through this simple message Leo suggests that so-called greatness often disguises other ills. The red dynamite and what it represents (political promises not being kept) is disturbing, yet the playful blue makes the painting and its message easier to swallow.

Another doozy of a painting on display is Cat in Pink, which on a hot pink background shows a black-and-white cat sprawled on its back, arms thrown back in lust as it receives sexual pleasure in the groin area via a 1980s-style Dustbuster. Sex addiction, the artist tells us, is the drug of the moment. From Tiger Woods to Jesse James, sex in 2010 is what cocaine was in 1980. Hilarious yet undeniably true, this work hits the viewer like a bullet. Actuality wrapped up in beauty and comic relief represents Leo's approach as an artist.

The artist's smaller paintings, as small in size as a CD case, typically sell in groups. One such small painting at the NEXT showing is Toliet, which shows a toilet with human attributes (eyes and a mouth) and the words, "I Heart Starbucks" shown up top. This is a humorous yet political stab at mayor Bloomberg and gentrification. Apparently Bloomberg made a glib statement about Manhattan not needing more public toilets due to the omnipotent presence of Starbucks. In typical Gen-X form, Leo attacks imbalance with a healthy dose of sarcastic realism.

At a time when PDAs and social media is muting more vocal and active forms of social protests, (think Vietnam vs. Iraq), Leo is a much-needed voice. Idealistic yet unmerciful, he is an artist to watch.

Under the Radar: Super Pop Boy | Leonard Zinovyev | Taco Eisma
1/10/19
COMMENTS (1)
bagonhand
Gucci Handbags as the classic of Italian brand, has celebrated 70 years of the world.Because of the practical and simple design,the Gucci handbag is very popular for many people.From the designe of Gucci, you can feel, it don't need to show off strong,Women's Handbags but also can be a resolute insistence.Gucci Handbag is combines with the classic Gucci design handbags and Expensive and scarce leather.It embodies the timeless aesthetic criteria of the brand perfectly.
Comment by: Aalit on Wednesday 07/21/10 at 1:00 AM
ArtSlant has shutdown. The website is currently running in a view-only mode to allow archiving of the content.