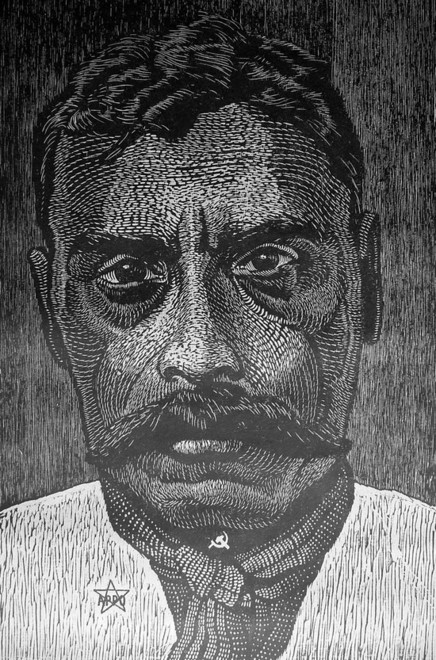 Best known by their Spanish-language acronym ASARO, the amorphous collective of artists was forged in the crucible of social and political unrest of Oaxaca, the biggest and one of the poorest, cities of the eponymous state, located in the south of Mexico, at the foothills of the Sierra Madre’s southern end.

In May 2006, the massive annual teachers’ strike held in Oaxaca City’s zocalo, or central plaza, was met with unprecedented aggression and arrests. In June, an ad hoc coalition of over 300 hundred organizations joined forces with the striking teachers, calling themselves the Asamblea Popular del Pueblo de Oaxaca (Popular Assembly of the Peoples of Oaxaca) or APPO. United, they demanded the resignation of Governor Ulisis Ruiz, who responded by sending a one thousand-strong force of police officers to break up protestors. Months passed, and the conflict escalated from its previously largely symbolic show, to a violent and deadly clash that left 18 people dead.

Oaxaca Now: Young Radical Printmakers, Marwen’s version of this relatively well traveled grouping of works (having hung in various iterations at Front Gallery in Oakland, California, Common Wealth Gallery in Madison, Wisconsin, Misericordia University, Dallas, Pennsylvania and Espacio Zapata in Oaxaca) opens with an equally moving photograph of the handful of artists who would come to form ASARO constructing their first collective work, a tapete, or sand painting, at the steel-toed boot tips of the aforementioned police officers, seen above.

A customary Day of the Dead memorial tradition, this particular tapete, made from sand and marigold petals, featured a portrait of Governor Ruiz in black (being stenciled by the person in red in the photograph) with the word asescino (murderer) below it.

ASARO’s overwhelming industriousness has resulted in scores of prints over their four year existence, many of which have also appropriated and re-imaged other customary or popular Mexican graphic iconography, such as the silk screened APPO lottery cards, seen at left.

The silk screens however, are somewhat of an outlier; ASARO chiefly prints using woodblocks cut from cheap three-ply sub-flooring. Sometimes cut using wood cutting printers tools, and sometimes with exacto knives and razor blades, the images are printed on inexpensive chalk white blotter paper, with the resulting images pressed in a bold black contrast that emphasizes the gouges, grooves and grain of the woodblocks themselves. Most prints are pulled from an antiquated steel roller printing press, but some smaller images impressions are pulled from hand-burnished blocks.


ASARO’s strong collective spirit manifests itself in the unsigned, unattributed works in the show. The anonymity of the artists is also a necessity; before they graced the walls of galleries these underground guerrilla works were being wheat pasted to the walls and buildings of occupied Oaxaca. In their present elegant and ordered locale on Marwen’s walls, ASARO’s prints also still remain largely untitled. They have become alienated through their elevation to high art from their stickered and spray paint-stenciled siblings, images of which can be found online, such as the agitprop portrait of 1910 Mexican Revolution hero Emiliano Zapata as a Mohawked, pierced ear punk.

Just as Governor Ruiz is literally demonized, historical icons, such as Zapata and Benito Juárez, are idolized.

Conventional subject matter, such as calavera, or skulls, appear in a whole host of ASARO prints on view, in part influenced by the work of another famous Mexican printmaker, José Guadalupe Posada. The symbolically charged image of corn also crops up in many works on view, such as the spectacularly concise No Pais Sin Maiz, or No Country Without Corn, seen below. The simple slogan, dramatic and varied mark making, and bold larger then life imagery drives the pointed rallying cry home with firm sincerity.

Some junior members of the collective, under the tutelage of more advanced and skilled printers, employ equally emblematic calls to arms. This was demonstrated by the well-designed composition of La Tierra Es De Quien La Trabaja OPPA (The earth belongs to those who work it), despite disfiguring amateur oversights like the reverse type of APPO at the bottom, a result of neglecting to account for the mirror image created by the printing process.

The full range of ASARO’s creative process on view reveals the development of their artistic achievements and is well suited to the educational environment that Marwen contextualizes the exhibition within.

As their individual and institutional collectors grow in number (The Fowler Museum and the Center for the Study of Political Graphics, both in Los Angeles, along with the Voices and Choices Gallery at Kutztown University’s Rohrbach library have folios of their prints in their permanent collections) ASARO’s international reputation also grows. How their move from city plaza to white cube impacts their practice is still unfolding, but their commitment to an accessible, activist art is built into their very mission statement, which mandates that change is necessary and that artists should feel compelled to contribute to that change using the tools of their trade.

(All images courtesy of Curator Kevin McCloskey, unless otherwise noted.)

Posted by Abraham Ritchie on 5/3/10
RELATED ARTICLES
COMMENTS (0)
ArtSlant has shutdown. The website is currently running in a view-only mode to allow archiving of the content.