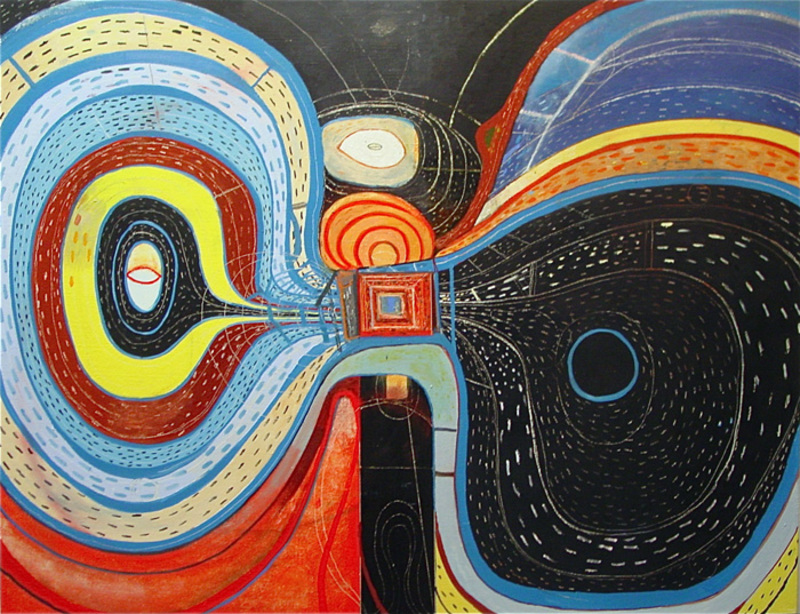 Richard Hull's amoeba-like blobs beg the viewer to contemplate comedy and tragedy at the same time. Our postmodern, hi-tech culture means we live in the fast lane, which has its consequences, but that doesn't mean we can't laugh our way through the ride.

The focus of the show is spatial reasoning with Hull contemplating the world around us. Is everything defined topographically, by a series of concentric circles without end? The tracked pathways of reverberating concentric pathways in Night and Day are whimsical yet serious (seen at top). The bright yellows and rich royal blues belong to the seventies, like pieces of pop culture that have traveled in time from the past. This is space and earth side by side. The tracks on the pathways suggest that things are running too fast, yet the celestial quality of the images reminds us there is always a new frontier.

Man with a Horn is curiously intriguing (seen above). It looks like a cloud of smoke, and yet it could be a horn, if you look at it from a certain angle. The blob leans to the right side in a dreamy fashion, like a cloud or bubble. Yet the black tracks once again bespeak industry and progress. There's happiness here, but also a profound questioning of the price of urban life. That is Hull's strength as an artist:  he keeps the audience entertained through vivid colors and daring shapes, but keeps the tongue-in-cheek element firmly in place.

The Unexploded Bomb is a good example of the artist's strategies. Looking like a roller coaster made out of licorice, the bright red paths shoot from top to bottom, with a dip in between. The reds are as juicy and delicious-looking as a Popsicle in summer, and the title a bit of satire on the human race towards success and building.

In this show Richard Hull demonstrates he is an artist who inhabits the urban world with his work. Yes, he tackles and tames the wild nature of space, but he does so with an eye that captures the hilarity and degradation of city life. Take, for example, Sisyphus, seen above, in which the entire right half is composed of black, blue and yellow concentric rings that look strikingly similar to highways. Yet this endless web of pathways also looks like a map of the galaxy.

The Arcades, done with crayon on paper, glows with effervescent joy.  Like many of the works in this show, this one contains mystical circles on the center of both amoebic blobs and the spiritual third eye. And yet the colors--reds and blues and oranges, depict the simple, childlike pleasure of an arcade. Perhaps if we look for the spiritual in the mundane more often, we'll enjoy the view while it lasts. There's a warning in Hull's show, about time passing and the unavoidable end, but the colors he shares are so enticing you can't help but be won over by the artist's combination of reality and fantasy.

Posted by Marla Seidell on 4/19/10
RELATED ARTICLES
COMMENTS (1)
Richard Hull is Wonderful
Richard Hull is one of Chicago's treasures. Western Exhibitions seems to be the keeper of many of the best artists around. Thanks. I want Richard to be in my next show.
Comment by: eburkedain on Tuesday 04/20/10 at 2:31 AM
ArtSlant has shutdown. The website is currently running in a view-only mode to allow archiving of the content.