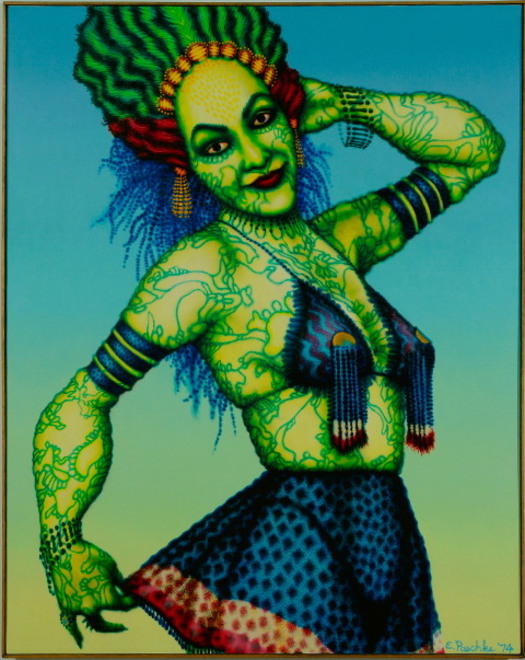 Gagosian Gallery in New York City will be closing its exhibition “Ed Paschke” this weekend, but Chicago, the artist’s hometown, is fortunate to have two complementary Ed Paschke exhibitions run at least a week into May or longer.  “Ed Paschke’s Women” is the title of the respective exhibitions at Russell Bowman Art Advisory (RBAA) and Alan Koppel Gallery.  True to the title, the works on view at each gallery mostly feature Paschke’s female subjects, though not exclusively.  Both exhibitions feature work from almost all periods of Paschke’s career and rarely seen artwork borrowed from private collectors.  The most compelling aspect of the exhibitions turns out to be the survey of Paschke’s career and evolution as an artist, rather than a nuanced investigation of his female subjects.

It helps to see Ed Paschke’s work in Chicago, a fact acknowledged by Dave Hickey in his catalog essay for the Gagosian show. Chicago is the city Paschke was born in, lived in the majority of his life, produced most of his work in, and eventually died in.  When Ken Johnson of The New York Times writes in his review of the Gagosian exhibition that, “Mr. Paschke’s portraits . . . are simplified, irradiated from within and cast in sickly colors, as if he’d envisioned them in fever dreams,” that’s not a fever dream Paschke is depicting, that’s a late night walk on Chicago’s North Side.  Chicago’s urban landscape of dive bars, strip clubs, elevated train tracks, and dingy restaurants with their various denizens were an intimate part of Paschke’s experience and something he clearly thrived on.  Paschke painted Chicago in all its freakish glory and in doing so he painted a lesser-seen America, one in which we may only just now becoming comfortable with.

In addition to the city itself providing inspiration to Paschke, there are also Chicago’s public institutions.  Held in the collection of The Art Institute of Chicago and on permanent display, is Georges Seurat’s masterpiece A Sunday Afternoon on the Island of La Grande Jatte, (1884-86) which makes a cameo in a Paschke painting seen at Alan Koppel.  In Paschke’s Winging (1968, seen above), a small portion of the Seurat canvas is reproduced at the top in a box-like format not unlike a 1960s TV screen.  Paschke crops the image, focusing on the lower left of the Seurat.  It is a vignette of a reclining man enjoying a pipe, in contrast to his better dressed, but more boring, immediate neighbors.  The focus on the everyday man enjoying life as it comes remains Paschke’s interest, rather than the life of the bourgeoisie.  Content is not the only thing Paschke seems to take from Seurat’s masterpiece, the stippling that make up some of Paschke’s backgrounds could also come from the pointillist Seurat painting, along with the attention to color and highly contrasting colors.

The Art Institute was not the only Chicago museum that influenced Paschke.  In 1970 he saw an exhibition of Andy Warhol’s work at the Museum of Contemporary Art, the artist that Paschke considered to be “the most significant postwar American painter,” according to the Ed Paschke Foundation.  Paschke is often described as a Pop artist, even in the Times review quoted above, yet his connection to Pop Art seems only linked by a shared interest in common experience.  Hence Paschke is interested in mass media images, but not their production strategies, as Warhol would be.  Paschke is interested in American experience, but not the antiseptic and sometimes sterile qualities as seen in James Rosenquist or some Roy Lichtenstein images.  If Andy Warhol became the “Court Painter to the ‘70s,” as Robert Rosenblum dubbed him in 1979, then Paschke was the painter of the jesters and freaks.

That’s where Paschke’s paintings take you, out of your comfort zone and away from familiar celebrities like Jackie O and Marilyn, to a tipsy late night on a neon-lit street in a neighborhood you probably wouldn’t go to, to locations where the people depicted in Paula and Janina thrive and are the kings and queens of the night (both paintings at RBAA, Janina seen at top).  Paschke focused on concepts of gender and sexuality long before it was widely acceptable to do so.  The figure in Paula is overtly depicted as “Other,” covered in tattoos, captured in a greenish hue and fairly gender ambiguous, but she (let’s assume she) is supremely self-possessed, confident and radiating a million-watt smile.  This is true for Janina and indeed almost all of Paschke’s women on view in these exhibitions.

Paschke is a Chicago Imagist before anything else and like the other Imagist artists that means an intense commitment to a particular way of artmaking, in the case of Paschke that is the grand tradition of painting.  While Modernism’s endgame was causing despair in other painters (as well as fruitful innovation), Paschke seems largely uninterested or affected by the constant threat of painting’s demise.  Instead Paschke seems to increase his commitment to paintings that communicate a human experience and presence.  His technical painting abilities and talent aided his vision; these exhibitions confirm that he was a painter par excellence.  To achieve colors that simply sizzle seen in person, Paschke began with an underpainting of grisaille and then layered over it colored glazes and impastos according to the contrasts and intensities that he wanted.  At the beginning of the1970s his mastery of painting is evident, by the middle and end of that decade it is undeniable.

Paschke’s paintings are uniquely Chicagoan, but they celebrate a view of city life that is found all over America, even if it might be hidden away.  Paschke’s portraits give their subjects a humanity and presence often denied them by mainstream society.  Not surprisingly, Paschke himself best described the America his paintings celebrate: "Right outside my studio door there is the street teeming with life, and within that are sorts of diverse combinations of different types of people. Some with varying degrees of sophistication. Latinos, African blacks, Jamaican blacks, Asian boat people, American Indians, Caucasians, all types are represented. Its completely integrated, almost an insane asylum out there and I love it. That is the idea of a big city. I like the idea of the cross fertilization of cultures. Its America."

Posted by Abraham Ritchie on 4/19/10
RELATED ARTICLES
COMMENTS (0)
ArtSlant has shutdown. The website is currently running in a view-only mode to allow archiving of the content.