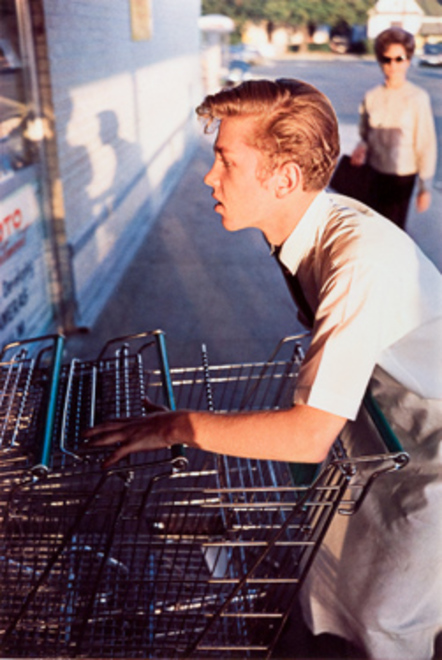 William Eggleston’s photographs, “range widely, they are highly differing, richly varying. In landscapes, cityscapes, street scenes, roadside scenes, at every sort of public converging-point, in dreaming long view and arresting close-up, through hours of dark and light, he sets forth what makes up our ordinary world. What is there, however strange, can be accepted without question; familiarity will be what overwhelms us.” These w ords come from Eudora Welty’s introdu ction to The Democratic Forest (1989), William Eggleston’s semi-autobiographical volume of photographs.

We see all this--and much more--in "William Eggleston: Democratic Camera, Photographs and Video, 1961-2008," the artist’s first U.S. career retrospective, at the Art Institute of Chicago until May 23. This show brings together Eggleston’s well-known color photographs of the American South and other places with his early black and white prints and video recordings. It amply confirms his reputation as one of today’s premier fine art photographers and makes us wonder why it has taken so long to assemble a major show of his work.

The artist was born in Sumner, Mississippi in 1939 and discovered photography during a seven-year period when he attended three universities, but earned no degree. His influences include Henri Cartier-Bresson’s book The Decisive Moment (1952) and Robert Frank’s The Americans (1959). Eggleston was so taken with Cartier-Bresson that he spent a fruitless year in Paris, hoping to make great photographs there, but returned home to take pictures of the world that he knew.

In the late 1950s and early 1960s, Eggleston made black and white photographs, which now look like first drafts of what was to come. The images on view at the Art Institute are mostly of the American South—empty rooms, a road gang of convicts, a woman in a shop surrounded by displays of light bulbs, three people in a parking lot, and more.

As Eggleston was beginning his career, the American South entered one of the most turbulent periods in its history. On December 1, 1955, Rosa Parks, a black woman, was arrested for refusing to give up her seat on a Montgomery, Alabama, bus to a white passenger. Soon after this, Martin Luther King, Jr. organized a boycott of Montgomery’s public transit system that lasted until December 20, 1956, when a federal ruling took effect and led to a U.S. Supreme Court decision that laws requiring racially segregated buses were unconstitutional.

The Montgomery Bus Boycott launched the Civil Rights Movement which engulfed the entire South for decades, but you would never know that anything was amiss from Eggleston’s photographs. His subjects are just people and he never comments on them with his camera.

Eggleston began to make snapshot-sized color prints during the mid-Sixties. In 1969, he showed his work to John Szarkowski, then Director of Photography at the Museum of Modern Art (MOMA) in New York. This encounter led to a solo show at MOMA in 1976 and simultaneous publication of William Eggleston’s Guide, a volume of his photographs with an introduction by Szarkowski.

By the time of the 1976 show, Eggleston printed his color work using the dye imbibition or dye-transfer process, which involves making three separate negatives (from red, green, and blue filters) in order to produce three separate matrices (cyan, magenta, and yellow) that are then aligned to make the final dye transfer onto gelatin-coated paper. The resulting prints are known for the permanence and intensity of their colors.

Color art photography had been shown before 1976, but never in such an important venue as MOMA. Critics sniffed that color was acceptable for advertising and travel photography, but not for art. Eggleston’s images proved them wrong and he is now credited with introducing color into art photography. From the most ordinary-seeming material, he culls strikingly beautiful color images.

The Art Institute exhibits several photographs from the MOMA show, which were published in William Eggleston’s Guide. The artist took these in Memphis, Tennessee and the states of Mississippi, Louisiana, and Alabama. The local feel of these images comes through in subtle details. The white people have the Anglo-Saxon features that we associate with Southerners. We see women with big hair, southern vegetation in the background, and even a meal of ham, greens, biscuits, baked potato, iced tea, and more.

Every image in William Eggleston’s Guide has what Eudora Welty calls an “affinity with human values.” There is always a direct human presence or a suggestion of it, as in the ham dinner, or a tricycle in front of a house. Eggleston’s people always maintain their dignity because he never peeps or condescends. Most of his prints measure 16” x 20”, a scale that’s appropriate to intimate subject matter.

Eggleston makes masterful use of ambient light, shadow, reflection, and flash in these photographs. When he was asked (in 2001 for a Thames & Hudson catalog of his work) when he employed flash and why, Eggleston replied that he used “direct or bounced” flash “early in my career,” but later concluded that it’s “only occasionally” necessary.

Huntsville, Alabama, 1971 is an image of a man seated on a bed in an empty room, recalling Edward Hopper’s paintings. Though most of this interior is naturally lit, bounce flash illuminates the ceiling and brings the image to life. In other photographs from William Eggleston’s Guide, the artist captures light on reflective surfaces (e.g., the hood of a car; a metal tray in an airplane) so illumination seems to come from within. Filmmakers including David Lynch and Sophia Coppola have acknowledged Eggleston’s influence on their work.

Following the 1976 publication of William Eggleston’s Guide, the artist has published many books and portfolios, selecting from among thousands of photographs that he has taken. Some of these works are presented at the Art Institute, but it is impossible to make chronological sense of them because Eggleston may take a photograph, store it away, and publish it in a book more than twenty years later. Chronology may not matter much because of the clarity and consistency of the artist’s vision.

One of the most rewarding of these books is Los Alamos (2002), which contains images that Eggleston took on road trips in the early Seventies. Some of the photographs depict New Mexico, but many were taken in the Deep South and it is not always possible or really necessary to determine where or when he took a certain picture.

The star of Los Alamos is Untitled (n.d.), which shows a chestnut-haired adolescent pushing grocery carts into a store [shown at right].    Pressing intently forward and completely unaware of the camera, he is lit from behind by the sun, which throws his shadow on the wall of the store and that of a woman standing nearby as it illuminates the back and collar of his short-sleeved white shirt, his arm, and his face. This image is as close to perfect as any photograph can be. With the utmost economy, it tells us all we need to know about its subject. This image could only be a photograph—and only a great artist like William Eggleston could have made it.

Posted by Victor M. Cassidy on 4/12/10
RELATED ARTICLES
COMMENTS (0)
ArtSlant has shutdown. The website is currently running in a view-only mode to allow archiving of the content.