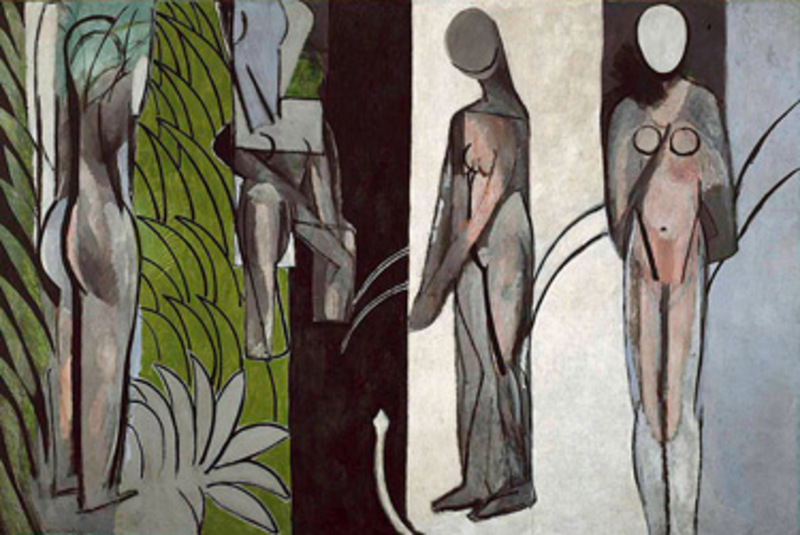 “Matisse: Radical Invention, 1913 – 1917” at the Art Institute of Chicago centers around Bathers By A River (1909 – 17), a masterpiece painting in the museum’s collection. The show focuses on a period of five years in the artist’s life filled with experimentation and exploration of what he called the “methods of modern construction,” a phrase repeated ad infinitum throughout the exhibition’s wall texts. The dates of 1913 – 17 seem odd because the timeline of the exhibition begins with 1907 and traces Matisse’s career from there.

As a major exhibition dedicated to a modern master, it is standard fare. There are the obligatory high tech scans and analyses of works, along with computer-enhanced period photographs meant to shed new light on the artist’s process. These kinds of procedures are par for the course these days. Faced with the threat of popular culture, all things educational have to scramble in order to attract the public. Just look at the Discovery Channel and the Museum of Science and Industry. Thankfully such elements in “Radical Invention” are relatively unobtrusive. The interactive stations are off in a room before you enter the exhibition. Perhaps this could threaten to overshadow what is in the show itself, but everyone entering seemed to be passing it by in favor of the main attraction.

The exhibition is laid out in sprawling, meandering fashion. To accommodate crowds, the focus is on open space. I went on the day the exhibition was first opened to the public, which seems like the appropriate way to survey a “blockbuster” such as this. Presented in Regenstein Hall, there were plenty of visitors, but the exhibition didn’t feel crowded. Whereas in the Art Institute’s new Modern Wing everything can feel rushed, the layout of the galleries, particularly the Early Modern galleries, push viewers along allowing only for quick glances. Fortunately, in “Radical Invention” one can step up close, move back, look and look again.

Matisse is often considered the good-natured older brother to Picasso’s angry genius. This exhibition allows for a careful look at Matisse alone, no works by other artists are included. And by focusing on his earlier years, we are shown two important things lost in the myriad posters taken from his book Jazz: Matisse’s use of color is without par, and a majority of his paintings are utterly bizarre.

The first point is hardly news; Matisse is renowned for his use of vibrant color. But seeing the works in this show, and there are many major, oft reproduced works here, is like being Dorothy and stepping into the Technicolor Land of Oz for the first time.

The small-scale painting, Bather (1909), which is almost just a study really, depicts a nude facing away from the viewer. Like any good Matisse, it is deceptively simple. What pulls you in is its blue background. It’s amazing, more like a precious stone or luminous stained glass rather than paint. It seems fresh and alive, even though it is entering its second century on Earth.

Bathers with a Turtle (1907-8, seen above) sports vibrant color as well, but not as powerfully. The space is unreal. Separated into ground, water and sky, the background is either super flat and shallow, parallel with the picture plane or it’s nearly endless and infinite. On this site of flux a nude woman impossibly sits. Her torso is crudely defined in such a way as to resemble the muscles of a superhero drawn by an adolescent boy. She stares listlessly at the titular turtle, painted red that pops it out of the green grass. It’s the most real and concrete thing in the whole picture, rendered proportionately and drawn in a black contour line. Another bather hunches over, androgynous and anonymous, holding out a hand to the turtle.

In the center of the composition stands a female, looking down. This is where the painting is at its most strange and unnerving. Her face is grey and patchy; she holds her hands to her mouth, which appears almost like it has no flesh or lips, only teeth. Here Matisse’s color in the form of muted pinks and flat grays is just as compelling as bold primaries. She appears to be absentmindedly sticking her fingers into her mouth, like she has a loose tooth she is trying to pull out. What may be curiosity comes off as subconscious self-mutilation.

This leads to Bathers by A River, which the artist worked on, in fits and starts, between 1909 and 1917 (seen above). The painting went through many states, but the central composition of four bathers remained the same. In a way it is Matisse’s Guernica, not just structurally in that it was worked and reworked, suffered, labored and fussed over, but also in that it marks a culmination. For Picasso, Guernica (1937) was the reification of politics and violence into abstract figuration. For Matisse, River is a similar achievement; it is the maturation of his nudes in nature motif and an accomplishment of complex chromatics.

I always think of the painting as being bright and full of color, but when you really look at it, everything is quite muted. It’s predominently gray and black and there is hardly any sense as to where this river might be. Aside from the dialed down tones, the only pure color is green, mostly an acidic green that hardly is anything like the wild beast joie de vivre coloring Matisse is known for. The river might be the super subtle blue to the right, but spatially, like in Bathers with a Turtle, the space is indeterminate. Now the space is even flatter and more abstract. It is the thoroughly modern space of the abstract picture plane. And as captivating as that sapphire of Bather is, it cannot match the complexity of River. This right-hand swath of color modulates from gray to blue to white and back to grey. Amidst the leafy greens and the scaffold-like bathers stand moments of spatial and chromatic opticallity. It makes sense to pull Matisse out of Ellsworth Kelly, but doesn’t it also make at least a little sense to see some of Barnett Newman in Bathers by A River?

Throughout the exhibition are pretty innocuous images of nudes and still-lifes that betray a strange angst and aggression. Frantic brushstrokes that have been worked, reworked, painted over and brought back, have more energy than simply displaying “modern methods of construction.”

In no painting this truer than View of Notre-Dame (1914, seen below). This is one of the weirdest and hard-to-forget paintings I have ever seen. It is my favorite Matisse, probably because it is so hard to read; yet it so strangely anticipates and preempts so much of the next 100 years of painting. What makes this painting significant is how well it lends itself to so much of what has come since. Of course this is debatable, but never have I seen a work of art that is at once so open to interpretation, as it is so completely closed to those arriving to it late.

I say this because of what is in the painting and how it’s executed. At first we have what appears to be some sort of stick figure with a green pea head casting a heavy shadow in a chalky blue interior. Where you’d expect a window is an apparition of Notre-Dame. The blue paint is transparent and loose and reveals beneath it several brushy, partially redacted diagonals. At some point the elements rearrange themselves before you eyes and the view of Notre-Dame becomes very different. The pea head turns into a large bush, the long neck and body become the edge of a road or a river and the shoulders and arms become an archway and bridge. But that still leaves the building itself: a strange structure that floats off the ground, sits back in space, and leaps out of the painting, all at the same time. Matisse has drawn the structure as a cube with a pair of towers, multiple times, all on top of one another. Then he has scratched into the paint with marks that look only moments old. This makes the structure appear to be vibrating, expanding and contracting, transparent and solid.

According to the wall label, at the time it was made, Matisse’s friend Marcel Sembat wrote about it, and another painting of Notre Dame. One was “very beautiful,” the other one, the one here, was “lopsided.” And even though “no one would understand it immediately,” Sembat preferred it. It still has this effect today.

Indeed while not all of the works in “Matisse: Radical Invention” are great, many are. And they are so good that they reach the point of still posing a serious challenge to artists of today. A challenge that even in the best works of Peter Doig, Luc Tuymans, Dana Schutz, Amy Sillman (and on) has gone unanswered.