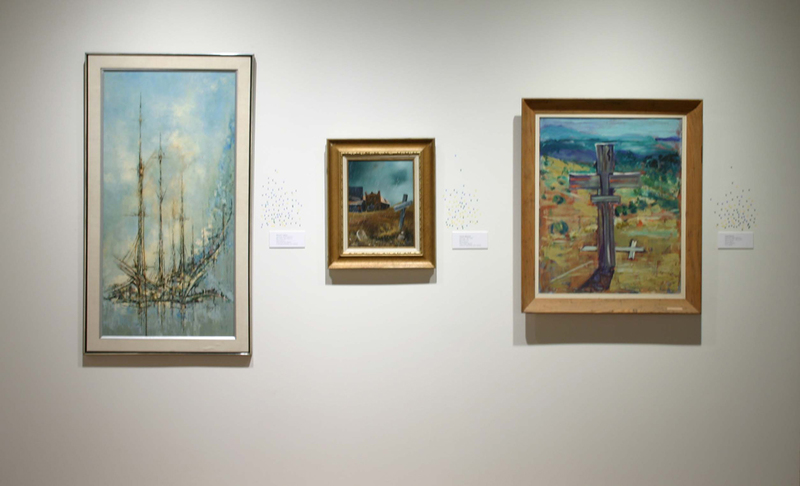 Parting is Such Sweet Sorrow

At the DePaul University Museum an interesting experiment in transparency is taking place. In the midst of a collection overhaul the museum has chosen to deal with the practice of deaccessioning head-on and in a frank, sometimes humorous, way. “Accessioning” is the process of acquiring a work of art for a museum’s collection; “deaccessioning” is getting rid of it. On view here are a slew of works in the museums collection that, after a two-year process, are finally headed out the door.

The exhibition reads like a Hans Haacke installation or other work of institutional critique, except Haacke or Fred Wilson haven’t been invited as the cheeky artist to come in, conduct research and speak truth to institutional power. In this case it is the institution itself laying bare a process that is usually done behind closed doors. It is perhaps odd that no curator or director is attached to the show. This makes perfect sense, though, because then the implied author of the exhibition is the museum itself.

Holding true to the modes of institutional critique there is an interactive component that ties in with the show’s title, “The Good, the Bad, and the Ugly: Museum Collections and 'deaccessioning.'" Viewers are encouraged to carry little colored stickers around and vote by placing them alongside the artworks. These are the sort often used to indicate a work is sold in a gallery or art fair, except in this case instead of red, the dots are blue, yellow and green. As you proceed through the show you find a cloud of colorful dots hovering alongside each work [see below].

Being a small university museum affords a lot of freedom. Can you imagine such a blatant honesty coming from the Art Institute? We are greeted by Paul Wesley Arndt’s Mid-Winter, date unknown, a not un-handsome landscape with thick swaths of oil in chalky pastels [seen above]. It’s accompanied in addition to the standard label by a reproduction of the deaccession form and one of several briefs on the process that weave a complicated, heartbreaking and fascinating narrative. It’s only after looking at the condition report that notes a tear that I look back at the painting. There is an enormous hole, described as “poor condition (tear proper left center).” There is something delicious about having a stereotypical painterly landscape with a massive hole in it prominently displayed in a museum [detail seen below].

The wall texts explain that these works will be either auctioned off, donated for resale (to assume their rightful place as thrift store art?), destroyed or used “by conservation students for study and practice.” There’s nothing like donating your body to science. The fate of the severely damaged works seems beautiful and melancholic. Will there be a ceremony? Will they be cremated?

The wall label below the Arndt starts out with the usual brief bio; he went the School of the Art Institute of Chicago and worked in an artist’s colony during the Great Depression. But then, “Market pressures demanded both neutral subject matter and high production, resulting in routine images like this one.” Nice. But it gets better.

How did this stuff ended up in the collection? In 1972 the Women’s Board of DePaul urged friends to donate works in order to build the university’s collection and further it’s educational goal. This resulted in the core of the museum’s current holdings, but also what we see here.  Some of the works received were, “more suited to a Chicago living room than a museum.” Two examples underscore this, one an installation of a late modernist chair and lamp with a glorious resin, gold and black abstract landscape [seen above]. The other, a group of gaudy bar stools, a minibar and a sexy senorita portrait.

Some descriptions of the work are brutal and hilarious, as brutal and hilarious as the works themselves. Irene Smoller’s, My Only Love, 1964, donated to the museum by the artist, is dressed down thusly: “The heavy-handed use of impasto […] gives no respite for the eyes […] During the era in which it was created the incongruence of technique and subject might have seemed appealingly avant-garde, but now it seems kitschy.” Ouch. Then we have Gerald Hardy’s Toledo (Moving Earth), date unknown, gift of Mr. & Mrs. Gerald Hardy: “Highly decorative and reminiscent of the work of the Abstract Expressionists, this painting is hampered by its small scale and overall quality of kitsch–a term that describes a lack of seriousness to hide a lack of ability.” If only this person were employed to describe every museum’s collection. But in Hardy’s defense, I would point to its affinity with Jean Dubuffet and Alberto Burri.

The two contenders for Best in Show are Le Negre au feu and Untitled (Landscape with fishers) both by unknown artists. Not “unknown” as in they aren’t famous, but “unknown” in that the museum doesn’t know who painted them. Le Negre is on a warped panel and crudely depicts a figure wearing an African mask on a brightly colored ground made using the splatter technique. Roughly translated the title is “The Negro on Fire.” Untitled (Landscape with fishers) seems to have materialized in the museum’s collection out of nowhere, the date is unknown and there is no record who donated it or when. Untitled is a paint-by-numbers composition. I think this one should remain in the collection, every museum should have a paint-by-numbers, especially one so well executed as this.

Under the Radar: Beatriz Guzman | Graham Skeate | Robin Wen
9/27/18
COMMENTS (1)
paul w arndt
Yes, I agree with your kitschy assessment here, but I think personally, in your free tiem, you might want to take a secondlook at Mr. Arndt......some of his works are mighty indeed. I'd suggest visiting the Bank of America in Woodstock , n.y. and Haev a long look at his enormous(@25 ft.) landscape of the woodstock valley....its very impressive with references to the Hudson river school and 1930's u.s. impresiionism, as well as constable and the like....o.k. well thats my 2 cents Wenzel, and yeah I hate that elvis/ doberman on velvet stuff too!
Comment by: oreokookie on Tuesday 06/05/12 at 8:07 AM
ArtSlant has shutdown. The website is currently running in a view-only mode to allow archiving of the content.