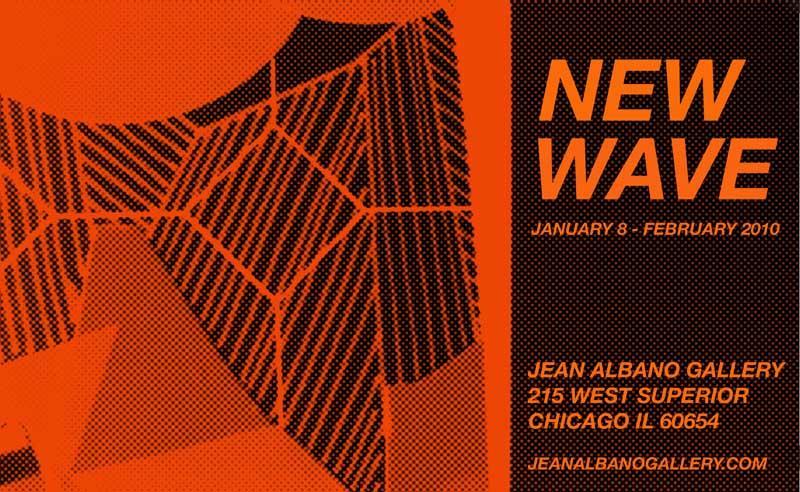 River North stalwart, Jean Albano is serving up something new with the gallery’s latest exhibition, “New Wave” on view until February 27, 2010.  Handing the curatorial reigns over to gallery staffers, Emanuel Aguilar and Theresa Murray, the exhibition presents a fresh perspective from the experienced dealer.  Screamingly vibrant and visually engaging, the collection of work is a departure from their usual program. Striving to present a new aesthetic, Aguilar and Murray sought out emerging talent and juxtaposed them with gallery heavyweights like Karl Wirsum and Margaret Wharton.  Their attempt to create an open dialogue between the eclectic youth and veteran trailblazers produces a succinct and cohesive vision of the future.

Perfect Equilibriums, F**ck, I Thought I was the Only One that Had Those (2009, seen above) is a complex labyrinth of acrylic paint, layered and intertwined in a stylized fashion trademarked by the Chicago artist Zack Wirsum.  This network of color, line and shape is an impressive greeting upon entering the gallery.  The acrylic on panel stretches 60 x 36 x 2 inches commanding attention that matches the aptly titled painting.  A circuitry of orange, deep blue, lavender and green provide an intricately constructed stage highlighting a bright white pair of New Balance shoes.  The combination of abstract line and form with recognizable objects is indicative of the artist’s work and representative of the 30-year-old’s generation, inundated by technology, material thing and a need for recognition and status.  Aguilar and Murray came across the painting on a studio visit with the artist, part of their campaign to seek out contemporary and relevant work for the exhibition.  Although Wirsum’s work has been exhibited in Albano’s space in the past, including Perfect Equilibriums in the exhibition provides a Midwest comparative to the linear and technically obsessive imagery of West Coast painter Robert Walker.  Despite differences in age or locale, the paintings by these artists reinforce the importance of process and technique, a sometimes forgotten practice in the digital age.

Zack is not the only Wirsum featured in “New Wave”.  Three works by his father and gallery artist, Karl Wirsum were also selected for this exhibition.  One of Chicago’s celebrated contemporary artists, Wirsum first entered the art scene in the 1960s with the Hairy Who group and later recognized as part of the Chicago Imagists.  The curators at Jean Albano have chosen to compare Wirsum’s humor, indefinable graphic space and cartoon-like subjects with the Brooklyn-based artist, Chris Uphues.  Seen immediately above, The Formally Young Salvador (1983) depicts one of Karl Wirsum’s iconic characters, precisely rendered with an animated quality.  Salvador exemplifies the artist’s ability to balance the intense and the playful, a cartoon with a menacing attitude.  A black background and bright, primary colors illustrate the artist’s tendencies to inject clever juxtapositions between elements of reality and the absurd.

Akin to this penchant for comics and pop culture, the paintings and drawings of Chris Uphues take influence from Wirsum, but with a contemporary twist.  Dismissing any conventional perspective or sense of reality, Uphues’s work is highly stimulated with elements of street art and Anime.

One of three works in “New Wave”, Frankenstein Love (2009), seen above, is a hybrid of Wirsum and Takashi Murakami.  Similar to The Formally Young Salvador, Uphues’s Frankenstein Love employs a black back drop contrasting a fantastical scene of bright green creatures floating throughout the space.  Although currently in New York, the artist is no stranger to Chicago.  Uphues is an Illinois native and attended The School of the Art Institute.  His work has been exhibited at various galleries around the city and In June 2009, Uphues was the selected artist for the Museum of Contemporary Art’s Works in Progress program.

Although “New Wave” is heavily dominated by male artists, work by Margaret Wharton and recent Yale-grad Betsy Odom offers a distinct view from contemporary female artists.  Using objects and form to confront gender issues is paramount for these artists.  Two works from the women particularly stand out in the exhibition.  Reminiscent of an article of clothing carelessly strewn about, Odom’s I Think This is Yours (2008), seen above,  is displayed on the floor of the gallery’s main space. The meticulously carved cork sculpture appears to be a sweatshirt, ambiguous of masculine or feminine style.  The title and placement of this work suggests different stages in a relationship: the morning after, moving in and moving out.  Thrown garments and rhetoric like I Think This is Yours give an emotionally charged feeling to which any viewer can relate.

Margaret Wharton has been a leading female figure in contemporary art for more than 20 years.  Synonymous with irony and craft, Wharton manipulates material into witty creations that present a new identity to the viewer.  Composition/Score (2010), seen below, is an assemblage of parts forming an elaborate female figure.  Wharton has disassembled a piano using the ivory keys for hair that shoot out from a tennis racket utilized as the subject’s head.  Other organs from the piano are appropriated throughout Wharton’s created body embellished with baby shoes and wheel standing in for a pelvis.  With Composition/Score, the tenured Chicago artist is dissecting society view of the female figure.  Objectifying each feature and replacing it with common, everyday items.

“New Wave” at Jean Albano is a refreshing endeavor for Jean Albano Gallery.  Gallery Manager, Theresa Murray explained that she and fellow colleague, Emanuel Aguilar made an attempt to recruit “fresh blood” by way of artists and potential clients.  With a diverse exhibition of work and a range of realistic price points the gallery achieves this ambition.