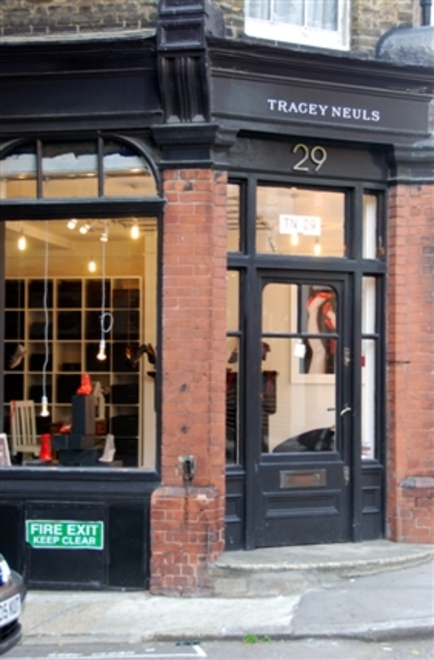 In February 2010 in time for London Fashion Week, footwear designer Tracey Neuls will open her flagship store at for a 3-way collaboration involving acclaimed contemporary artist Nina Saunders, fresh from Venice Biennale, and revered British textiles company Sanderson, on the eve of its 150th anniversary.

Enter the world of Mad Hatter’s tea parties, English eccentrics, forests peopled by spectacular creatures, pools of light, colour and water. Tracey’s shop will be transformed… The collaboration is to be anchored by a large-scale sculpture from Nina Saunders and a dedicated collection of shoes from Tracey, both employing reissued vintage Sanderson textiles. Nina’s sculpture, a morphed, melting item of furniture, upholstered in Sanderson and set amongst silver birches, sets the scene for this playful subversion of the expected.

Tracey’s shoes take this further. With their old-fashioned prints and edgy forms, they will be coveted the land over!

Both Nina and Tracey sculpturally tease new forms from discoveries, play with surfaces (wood, leather, textile) and have a keen sense of the surreal. The collaboration has spawned a cross disciplinary dialogue, and they are together working on a smaller piece (think squirrels, shoes), which will be unveiled at a later date. Tracey’s vision has always stretched beyond the shoe, and her shop’s eclectic displays reflect her openness. This chimes nicely with Sanderson who have throughout their history forged links with dynamic designers and artists, encouraging a stream of innovation to mingle with the timelessness of their product.

As Tracey Neuls says, “a collaboration that combines three completely different disciplines and generates contradictions like classic/ avant-garde, or heritage/ timeless is exactly what is about.”

The project represents a coming together of shared mind-sets, combining artistic innovation with a healthy respect for traditional craftsmanship. February brings an enmeshing of design, art, and decoration - footwear, furniture, and interiors.

Posted by Jane Mae Howard on 1/30/10
RELATED ARTICLES
COMMENTS (0)
ArtSlant has shutdown. The website is currently running in a view-only mode to allow archiving of the content.