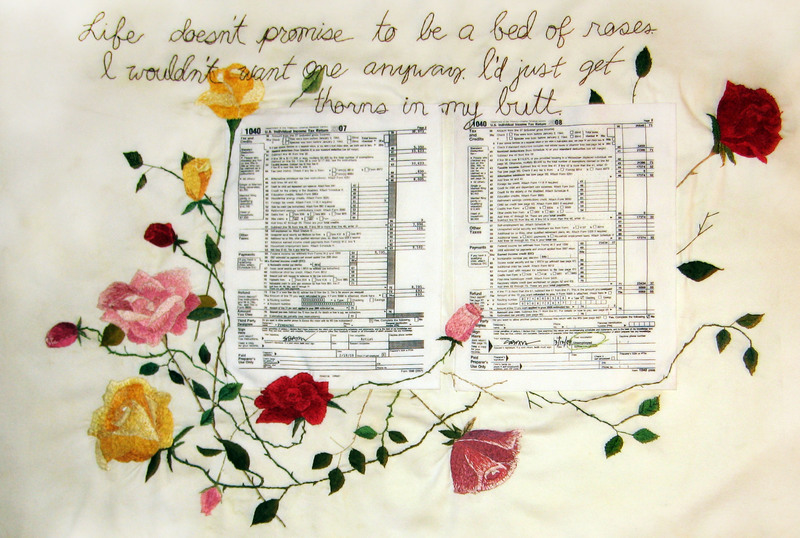 Shawnee Barton, What Color Is My Parachute?

Lets talk about your new show Artist: Unemployed at LivingRoom Gallery, which addresses your experience as an artist during the current recession. How has the function of your practice changed since day jobs started disappearing?

On a practical level the recession has helped my practice.  Because I can’t find employment, I have more time to make work.  I’ve also started thinking about the cost of materials more, which is an important consideration when you are making art about being unemployed.

Conceptually, the recession hasn’t changed my practice a lot either.  When I am spending a lot of time thinking and researching a certain problem, issue or idea, it usually works it’s way into my art.   If I am fully obsessed with an idea, I can make an installation full of pieces while trying to work through individual components of complex issues.  In the past I’ve made installations about consumption, relationship dynamics, the creation of self-identity, and this time around it is about the recession and my inability to get a job.

There are many artists out there making work about the economy on a macro level by doing things like taking photographs of foreclosed homes, writing narratives about failing industries, etc.   I chose to address it in a much more personal and therapeutic way because for me the easiest way to tackle big issues in life and art is to bring it down to a personal level and to keep a sense of humor.

I started thinking about the recession during the last election while was serving on Obama’s national arts policy committee.  I want to live in a culturally rich country and to help people understand why it is important to have art in their lives. I also worry about what is going to happen to the scores of unemployable art school grads who owe tens of thousands of dollars in student loans, and I passionately hope that the Obama administration will create an artists corps.  This will help both of the above issues.  When kids learn about and make art in school, they appreciate art as adults.  It is a very simple cause and effect relationship that is supported by research.  And when the American work force is filled with adults that have been trained to think creatively and to use innovation throughout their lives, our country will prosper.

A lot of your pieces are really funny, with a lot of clever comic timing elements alongside more serious issues. What role does humor play in your work?

I use humor in my work for a number of reasons.

In general, I don’t like art that takes itself too seriously.  Humor allows me to address serious topics without making work that feels heavy-handed or angst-y.

Humor also makes art accessible to a wider audience.   I loved that there were a couple kids playing with my art at the opening last Friday.  This kind of inclusiveness is important to me.  Just because art is fun or funny doesn’t mean it’s simple or dumb.  It can be complex and offer something different to different people.

Finally, I use humor as a coping mechanism.  As a kid, I was most attracted to the circus clowns with tears painted on their faces.   This contradiction still feels relevant because it reminds me that there is just a fine line between humor and tragedy.  Humor connects us, and it allows us to relate with one another.  It’s a tool that makes discussing difficult topics easier.  All of the work in this show was inspired by the genuine sentiment that if I stop laughing, even for just a moment, I will surely start crying.  On one level, my bike piece is just a funny and elaborate pun on the title of a cliche self-help book.  But creating a sculpture about pedaling a bike while never getting anywhere also provided me a metaphorical outlet to cope with my own frustrating, depressing, indulgent, and seemingly never-ending existential crisis.

I always like learning about artists’ hobbies, and you’re rumored to be a pretty solid card player. Has your experience as a winsome poker player influenced your work or your practice, or do you consider them two entirely separate pursuits?

There are some cross-overs between art and poker in my life.   I learned a lot about the game while I was in art school.  My good friend Ross Moreno, who finished his MFA in sculpture, and I were at a game that got busted by the police while we were at SAIC.   The buy in was only $20, and I remember that feeling that it seemed pretty ridiculous for cops to spend their time on such trivial things.

I was also the teaching assistant for Jim McManus’s Literature of Poker class during both years of my MFA program.   As graduation present to myself, I entered a World Series of poker event and ended up finishing second out of 1200 players.   Jim was in Vegas then, and he also made a final table that year.  It was really special to share such an exciting moment with him.   He has been such a great mentor to me—even though he doesn’t cut me any slack at the poker table.  He recently included an interesting anecdote about a bluff I made during that 2006 WSOP tournament in Cowboys Full. It meant a lot to me to be included in that book because it is very special to those of us in the poker community since it is the most complete written history of the game we love.

I haven’t made any art about poker. They feel like pretty separate endeavors, and I am not the best at balancing both in my life at the same time.   During the summers, when I play the most poker, I don’t make any art.  And in the weeks before a show goes up, I don’t play cards for big money.   Mentally, I don’t think I can do both well at the same time.  They both take a lot of focus and encourage obsession. I don’t really know how to do things half way, and when I am playing cards regularly, the first things I think about when I wake up are hands that I have recently played.  And when I am making a lot of art, I am trying to reconcile issues in pieces I am working on right up until the moment I fall asleep in bed each night.

I do write a lot about poker though.  I am currently working on “Roaming Blog” project where I keep a blog on other people’s blogs.   I have a post on feminism and poker in a new blog at Bad at Sports called “Off Topic”.  I wrote this story when I was living in Chicago and playing professionally.

There is a new casino near Chicago with a thriving poker room, but in most parts of the country, the bad economy has hurt the games.  Less people are entering tournaments and fewer people have extra money to throw around.  These things make it a much harder way to make a living. Because of this, I am not playing as much now.  I have had to spend a lot of my bankroll on art and living expenses.  But hopefully when the economy turns around, I will be able to find a job in the arts or get back to the tables full-time again.

Posted by LivingRoom Gallery (LRG) on 12/1/09
RELATED ARTICLES
COMMENTS (0)
ArtSlant has shutdown. The website is currently running in a view-only mode to allow archiving of the content.