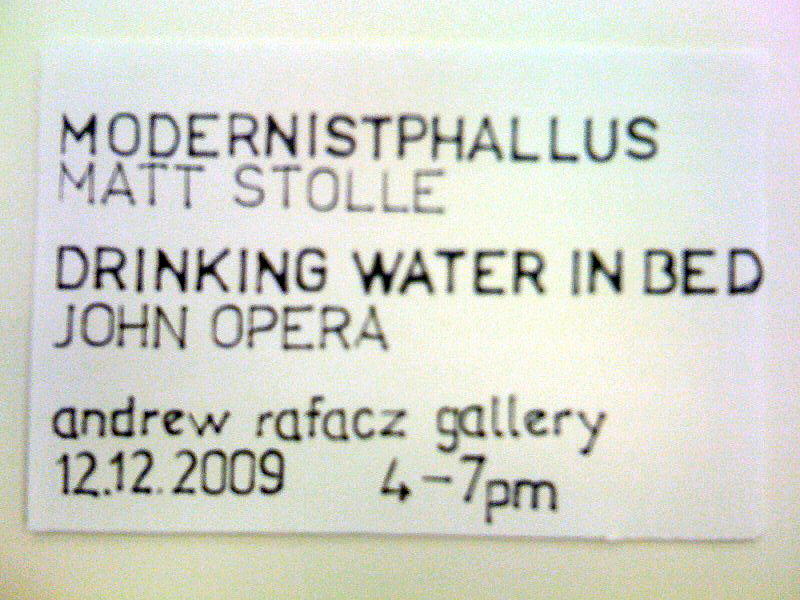 In 2009, as the master city plan for Chicago turned 100, Chicago’s Modernist legacy was celebrated, revisited, reinvigorated and, most of all, exhibited.  Chicago-based artist Matt Stolle closes out 2009 and begins the New Year with both admiration and skepticism of this Modernism, in his solo exhibition at Andrew Rafacz entitled “MODERNISTPHALLUS.”

The chauvinistic, all capitals exhibition title is overtly tongue-in-cheek and at odds with the work displayed in the gallery. The title’s rhyme with “fallacy” makes sense and comes to the fore more clearly in the context of the gallery, as Stolle investigates both the ups and downs of Modernism.

Appearing first as crisp geometries, a majority of the works on view are small, spray painted abstractions.  These are made by folding the corners of a square, heavy weight piece of paper into the middle, and then spray painting over the layers in different degrees.  Upon moving in the viewer sees that the supposedly clean lines, sharp angles and parallel lines break down.  Step back again and the Modernist fantasy is restored.  These small paper works reference a number of Modern masters, especially David Smith’s spray paint works (recently on view at Russell Bowman Art Advisory), but are distinctly of our present moment.  They appear as an allegory of Modernism: promising something utopian and perfected, but as you try to grasp it and come closer the fantasy flees you.  However, these works celebrate their position of promise through their subtle tone gradations and their feeling of being totally finished.

A particular standout from these works was Untitled (MP03), seen above, for which three corners of the square paper were folded into the middle, spray painted over, then unfolded, leaving a gray square, the creases and hints of the paint on the paper’s other side.  The spray paint pools in the middle and subtle tones build up along the corners as the paint saturates the paper, contrasting with untouched areas around the center.  The strict geometry and formalism of the work is given a counterpoint in the curves of the paper that contradict the work’s insistent flatness. If the geometry and formalism of Modernism is very masculine (and historically it has been male-dominated), here Stolle diffuses that machismo.

Existing as a diminutive floor-based sculpture, Untitled (MP02), seen above, is a phallic, stump-like piece of wood, likewise spray painted Battleship Gray.  The domination of nature by the flat gray paint recalls Modernist skyscrapers and housing projects that similarly dominated nature and their occupants, usually for the worst.  Stolle’s combination of the natural and artificial advocates an understanding between the two through their stark opposition and seeming failure as the stump is splintered and twisted over.

The ideals of Modernism continue to intrigue artists and why shouldn’t they?  Housing for everyone is a great idea, even if the massive housing projects were a complete failure.  There’s still appeal in formal geometric abstraction, even if we agree that the initial iteration was too male-centered.  Stolle takes the legacy of Modernism gives it a slightly humorous elegy and then brings it back to life.