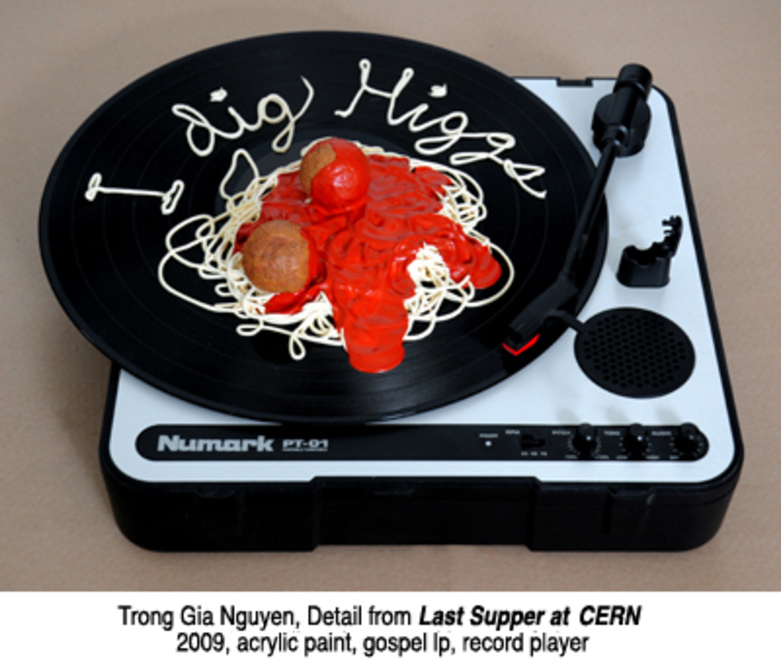 I am not a religious man.  My spirituality is a mish-mash of a Catholic upbringing (long atrophied) and a large helping of pop culture spirituality (from Yoga to Oprah).  I guess I am more comfortable placing my faith in scientific fact, with faith being the perfect word for my belief because I have no true comprehension of science.  Its what I hold as TRUE, but yet do not fully grasp.

Visiting the exhibition Dis/Believer: Intersections of Science and Religion in Contemporary Art, I realize my faith should really be based in Art.  The spiritual connection I feel from staring at a powerful painting or provocative sculpture that translates it’s meaning without a word being uttered is magical. Maybe even a miracle?

When you first walk in to Columbia College’s Glass Curtain Gallery on the corner of 11th and Wabash in Chicago’s south Loop, you are immediately drawn towards the glowing ceiling to floor white mobile in front of you.

"The Last Lullaby" by Teresa Diehl

Teresa Diehl’s installation The Last Lullaby is in response to her trip to Lebanon in 2006.  While there, she found herself in the middle of a conflict.  Rocket attacks between Israel and Lebanon were coming down are the civilian population below.   Diehl examines how life goes on and human nature allows one to numb oneself to the realities of possible death.  The glycerin molds of lambs, helicopters and bombs are heavy handed, but so are bombs.  And faith, fate and destiny are all one has to get through these times.

Sandra Yagi’s paintings “Noah” and “St. Jerome” recast each of the two biblical stories to examine modern issues. In Noah, Yagi places the figure on land with the cruise ship arc, docked behind him and is surrounded by a group of extinct animals, some discovered through scientific study.

Kysa Johnson’s two paintings are gorgeous representations of religious works. Tiepolo’s Immaculate Conception inspired one painting done as a microscopic yeast colony blown up – addressing how asexual reproduction happens.  The other inspired by Carracci’s St. Catherine in Ecstasy is of the molecular structure of MDMA magnified.  Through both of these works, she is commenting on the miracles found in the bible are being achieved today.

Technology plays an extraordinary role in contemporary society.  So it is no surprise that the topic too made it into the exhibition.  The Australian collective, The Glue Society captured satellite images from Google Earth of four locations for their work “God’s Eye View”.  They composed four stories from the bible, the Parting of the Red Sea, The Garden of Eden, Noah’s Arc, surrounding by rising waters and the crucifixion of Christ.  For a second, you see these and think “could this be real”?

Trong Nguyen’s “Last Supper at CERN” incorporates text message length statements and the search for the Higgs boson or “God Particle” which some say will prove the existence of God.  He does this in a fun way.  13 turntables play gospel music.  They are set on top of a long table placed in the same way as Christ and the Apostles in  Da Vinci’s “Last Supper”.  On each record player the guests spilled spaghetti and meatballs spelling out messages in text form, “OMG!!!”, “Geeks = Gods” and “Hallelujah!”  as if the mess came as a result of the guests jumping up in celebration of  the discovery being announced.

These works help me understand a small bit of two complex topics that I’ve learned don’t have to be in opposition. Is that discovery a Miracle?  No, but the insight gained does reinforce my faith that art can make a hopeless soul like myself see.  And for that, I place my faith in the power of art.

Categories:
Posted by mporter@colum.edu on 12/11/09
RELATED ARTICLES
COMMENTS (0)
ArtSlant has shutdown. The website is currently running in a view-only mode to allow archiving of the content.