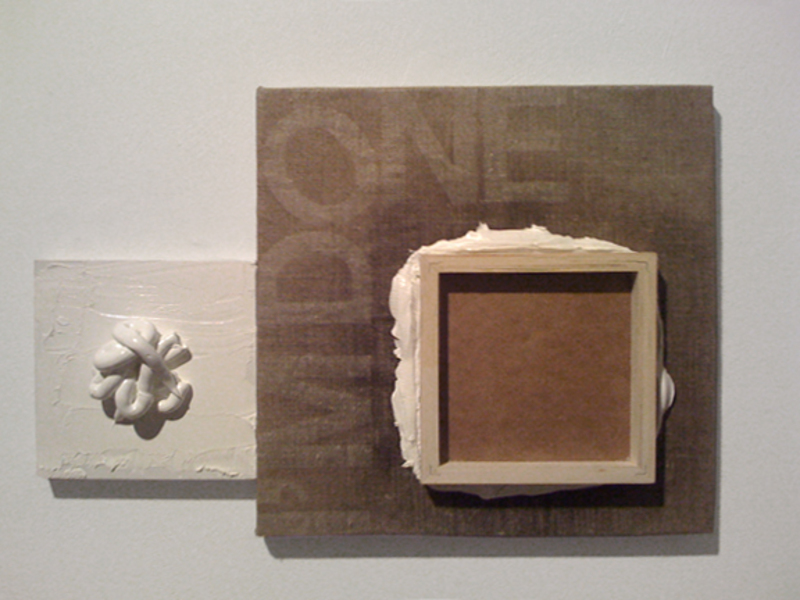 “My verb was ‘transform.’ You can conjugate that however you like,” said Simon Anderson, as he meticulously destroyed a guitar. “39 Verbs,” a one-night exhibition at Packer Schopf Gallery and part of Chicago Artists Month very much had the feel of a carnival or science fair.

It is a little unclear, but the event appears to have been a retrospective of sorts for Industry of the Ordinary, the conceptual art duo Adam Brooks and Mathew Wilson. The statement for the “happening” reads, “over five years of practice, Industry of the Ordinary has generated projects described by a single line of text on its website, to date, 39 verbs have been used […] 39 artists, critics, curators and other cultural workers have been invited to reinterpret these verbs.” Though it’s a little hard to sort out who’s who, since so many people take on many, if not all, of those roles.

39 Verbs card. Courtesy of Industry of the Ordinary.

“I don’t know how the verbs were picked, but I find it incredibly funny that ‘impregnate’ was matched up with an infertile woman,” remarked Annie Morse about her verb as she discussed her contribution: a tall thin stalk rising up from a pile of avocado husks poetically sprouting a few tiny leaves from it’s tip. “I was just bemoaning the fact that the track light over my piece went out. But it’s OK, avocados thrive in dim lighting,” she added. The move of taking a plant currently being grown, the fairly pricey avocado, and presenting it amongst the husks of previous generations as art for a single night before returning it back to its real job of being home-grown food seemed like a good one to make.

Amidst the art objects, performers had set up. Tony Tasset, whose verb was “walk,” entertainingly sang off-key and with great hammy exaggeration pop songs such as “Walk Like A Man,” “Walk Like an Egyptian” and “Walk This Way” with his wife, Judy Ledgerwood. Duncan MacKenzie, representing the collaborative entity Kuras & MacKenzie, cross-stitched a domestic inspirational message: “Please help yourself.” The verb was “gift.” Not being in a store or in front of a bowl of candy, I read it as meaning, “Please, help yourself because we are either unwilling or unable to help you, it will be better for everyone that way.”

Industry of the Ordinary ostensibly “challenges the pejorative notions of the ordinary,” which I think is a good way to think of the event. It is a fairly ordinary occurrence for artists to organize one-night only art party events packed to the gills with artwork. Once you go over 10 people, you can’t really call it a group show anymore. It’s really crowd show. Often these types of evenings are organized by a younger age group and are usually in apartments or non-white cube spaces. Just as often they are organized on themes or assignments like “39 Verbs.”

This can be incredibly problematic for younger artists, I think. When you are still developing your own practice and way of working, to perpetually make art contingent upon themed assignments can short circuit a longer trajectory of investigation. Frequently group endeavors, and the risk goes up the more people you have, result in an overall chaos, like a carnival or a fun fair. This doesn’t preclude specific works from standing out as particularly successful, though.

So with all that in mind, it was interesting to see that sort of phenomenon playing out with older, established “cultural workers” in the space of a commercial gallery. The added element of including patrons and curators was also interesting. But I wonder, does that validate the event in some way, or is it just an ordinary one-night only art party event that’s fun but also has too many people participating in it?

Jason Lazarus took it as an opportunity for experimentation and to move away from photography. He arranged for an ordained Catholic priest, Father Jef Johnson, to receive confessions via text message, the verb being “ask" [seen above]. From general comments I understand some took it lightheartedly, most were raw and honest in asking for forgiveness. I decided to participate, and wanted to ask something sincere. I don’t feel I need forgiveness for all the heavy shit going on my life, more that I just need to work through it. What is something I feel genuinely guilty and troubled about? I’m incredibly judgmental about art. “[F]orgive me for hating most of the art that I see,” I confessed. I know, that is really lame, but it’s also true and it troubles my soul. The reply, “nothing 2 4give…. all matter of taste.”

Caroline Dahlberg Answers 5 Questions
9/17/18
COMMENTS (0)
ArtSlant has shutdown. The website is currently running in a view-only mode to allow archiving of the content.