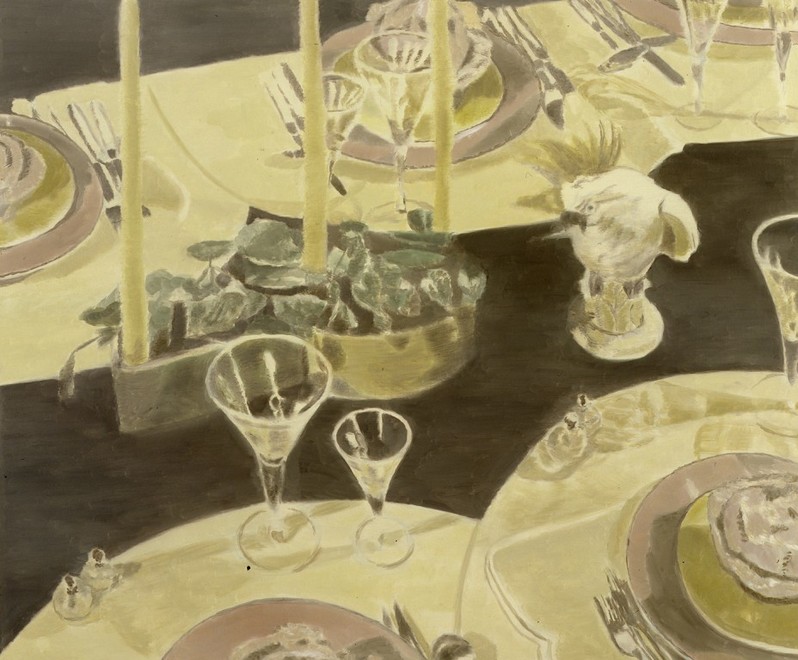 On the way home from a research trip to Germany, I got off the Thalys in Brussels to visit the Luc Tuymans exhibition in its final days of its two-year world circuit. I have always been dismissive of Tuymans, convinced that he does nothing that hasn't been done before by better, more reputed artists. I had concluded the work was derivative – before I had even seen it in any substantial form. How wrong I was!

Although Tuymans' brush barely appears to have touched the canvas, this is painting that demands immense concentration, extended periods in front of it, and as a result, reveals a depth over time. This is where Tuymans’ work is so different from Gerhard Richter’s, the painter I most wanted to believe Tuymans was imitating. On Tuymans’ canvases, there is no working up or working over with layer upon layer of paint. Indeed, Tuymans’ work is not very painterly; it is ephemeral, transient, disappearing off the side of the canvas. It is this quality that has prompted critics and historians of art to proclaim Tuymans’ iconoclastic practice as a response to the end of painting, the end of art as we know it at the end of the twentieth century. And it is also the quality that makes Tuymans’ work so different from both the American and European painters with whom he shares the second half of the 20th century.

Peter Schjeldahl in his review in The New Yorker writes that "Tuymans is the most  challenging painter in the recent history of art.” However, Schjeldahl also claims that Tuymans will never be popular. And if this is true, it is for the same reason that I have often dismissed his paintings. In keeping with the thinness of the paint, they are not in anyway aesthetic, but rather, appear as painting put in the service of conceptual arguments that are often very difficult to grasp. The experience of being in their presence is unsettling because unlike virtually every other artist who devotes him or herself to painting, Tuymans refuses to draw us towards his work. Before them, I had no desire to move closer, to inspect them, get intimate with the canvas. Indeed, these are images seen more clearly and with a greater sense of ease from a distance. 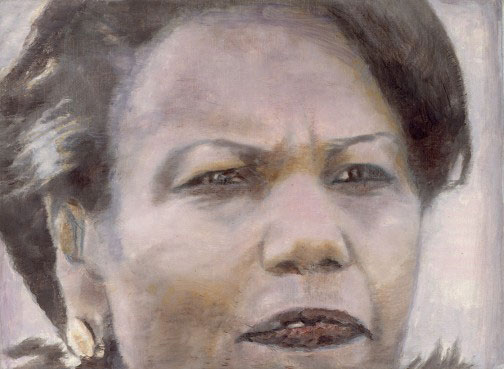 There are other characteristics that make them difficult to look at, and sometimes impenetrable to understand. For example, in a painting such as The Secretary of State (2005) Condoleezza Rice’s image is difficult due to the way it is cropped, the ambiguous expression on her face, our inability to give it context through knowledge of where she is, what she is reacting to. The painting is unsettling because it could be interpreted in a number of ways. Like many of his works, this painting is one in a community of works, in this case: Proper. The museum displays talk about Tuymans’ paintings as existing in series, however, to be sure, they don’t belong to series in the Warholian sense (despite what the museum claims). Rather, like the number of paintings that express the obfuscation and resultant devastation of US political life in the Bush years to which The Secretary of State belongs, these are groupings or communities of paintings that have been placed in a set of historical or conceptual circumstances. Small and, more recently, larger paintings are placed on a wall such that the only conversation between them is established by their presence on the wall. Each of the rooms in this retrospective was used for a community of paintings and in each case, the historical context of the group as a whole had to be communicated by texts. There is nothing inherent to the images to explain what we are looking at. 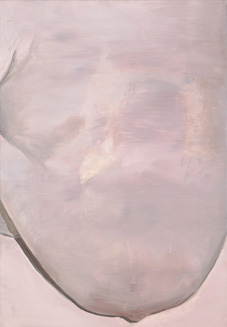 To reiterate, visually, the works are often ambiguous, sometimes even abstract in their ambiguity and inaccessibility. Their troubling nature is emphasized in many ways: for example, in an image such as The Diagnostic View VII, 1992, there is a layering of paint. However, the layering does not create depth to the painting, but rather, it functions to make the image and the object luminous – a luminosity that is in contradiction to the obviously sick breast in the image. The titles of Tuymans’ paintings are also disquieting, titles that usually change the meaning of the image completely. As in the case of The Diagnostic View VII the perspective and the dimensions of people’s bodies, the fragmentation, the impossible sizes, bodies always skewed and distorted by the painter can be challenging even to look at. Thus, in their form, the paintings are awkward and resist all possibility of comprehension. The images often disappear off the side of the canvas, or the image is eclipsed by an encroaching shadow to emphasize the off-screen, the threat of the out-of-frame. Tuymans' work is often described for its resonance with the photographic, and it is true the photograph is everywhere hovering around these paintings: the transient, the sense of an image in passing, on its way somewhere else, the low production values, the strange perspectives, these aspects of Tuymans' work are all more commonly found in photographs, not painting. 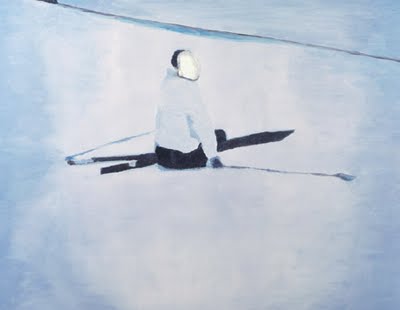 I could talk about many of the individual paintings but I'll just give one example. In an image that was part of a group entitled, Holocaust, Der Architekt is a figure in the snow. We don’t know if it looks forward or backwards, thanks to a mask which could cover the face or the back of the head. The image is, apparently, taken from the home movies of Albert Speer, the architect of Hitler’s monumental cities. The text on the museum wall says that this group of paintings echoes the unrepresentability of the Holocaust, however, to my eye, what makes them compelling is that the painting exists outside of the context of German history. The architect seems to be an image of a man, or maybe a woman, who has fallen, or perhaps has been caught in the act. He or she is vulnerable, but maybe completely in control, in a landscape that is luminous. The contradictory possibility of a painting such as this is its very meaning. Certainly, the representation of elements of the Holocaust as “contradictory” and opaque do not fall under the conventional demand for “unrepresentability.”

Yet another aspect of these works that makes them visually compelling is the frame within frame motif that emphasizes the second-hand nature of Tuymans’ visions. In each of them, there is something caught, cold and still, and in an image such as Within, that something might be us, the viewer, behind bars. In this gesture of repetition, whether the frames within frames are real or imagined, we find a critique of images, an iconoclasm that rhymes with the use of grey, an iconoclasm that emphasizes the mystical, whimsical nature of paintings that are in the process of fading out of view. 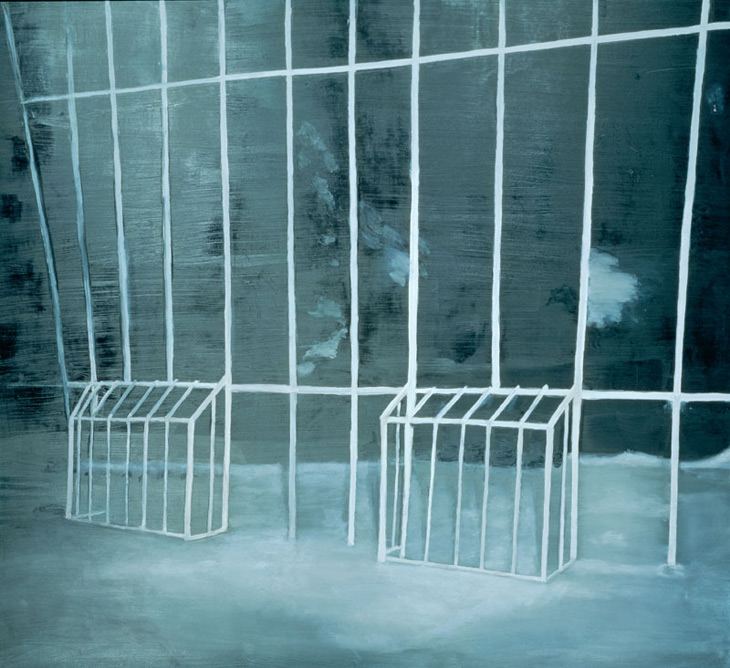 Posted by Frances Guerin on 5/9/11
RELATED ARTICLES
COMMENTS (0)
ArtSlant has shutdown. The website is currently running in a view-only mode to allow archiving of the content.