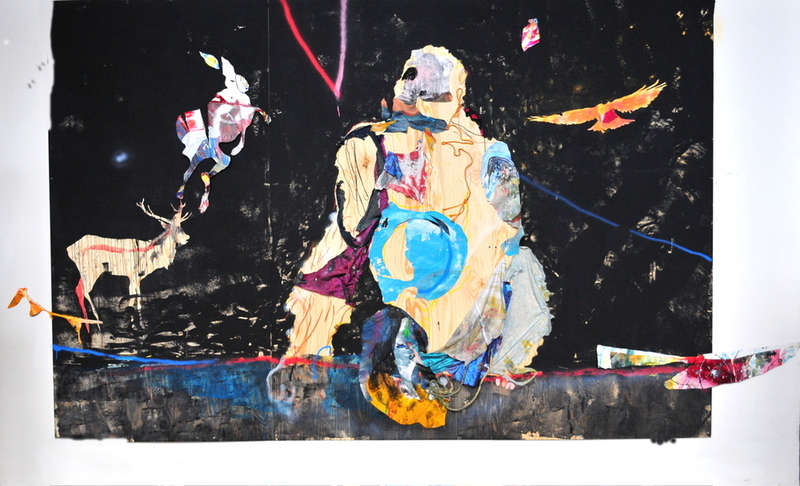 Maud Piquion's new gallery on Brunnenstrasse is a one-room storefront with a sweet, inviting yellow and white awning and an installation by Wolfgang Ganter involving a mummified cat and dog in the window. The show of paintings, collage, sculpture and "Paganini non ripete" a video by the Norwegian artist Kaj Aune, playing an insane male musical genius is part of "Resurrection," the latest three-person show in a series of exhibitions Piquion has organized with artists originally represented by Brunnenstrasse galleries vanquished to the recession. Through the French-born curator's first three shows that were ripe with black humor, she has revived the momentarily quiet street. Brunnenstrasse was previously a hub of the Berlin art scene and Piquion's space is generating all kinds of buzz.

Piquion has a wonderful appreciation for work others might find icky or off-putting. Her curatorial sensibility blends Charles Adams and Charles Saatchi into short shows of promising emerging artists with prevailing dark, witty and beautiful work. Her current show is her first featuring artists in her roster. However, the mood was in keeping with her previous shows of artists represented elsewhere.

For "Vorspiel I," the first exhibition in the gallery, included glowing glass vintage medicine jars containing mysterious white sculptures by Jenny Michel and Micha Hoepfel and paintings of candelabras that Henry Krokatsis made with candle smoke. Both artists' work aroused a pure feeling of delight and a desire to not know too much about technique or materials, lest information dispel the wonder.

Wolfgang Ganter's "Resurrection" functions in the opposite way. At first, his colourful large-scale photographs appear pretty but almost too sweet. Acid-bright patches of hot pink, yellow and orange interrupt a nostalgic scene of people in seventies swimsuits at the beach. However, Piquion discloses that Ganter invites bacteria to eat away at his images' surfaces. The symbolic results heighten the feeling of memories devoured by time and natural changes. And the visual effects that first seemed merely pretty, now appear beautiful.

Tra Bouscaren's collage-on-canvas with epoxy- and mixed-media paintings on wood also reveal unfolding layers of interest and intrigue. The Boston-born artist with a degree in Philosophy from Yale University combines forms and materials like ingredients in a hearty, spicy stew. On one corner of his central piece, he painted black around the outline of a stage on one massive plywood panel, letting the wood's natural color and grain form the animal's fur and facial expression. He then cut a jackrabbit from thickly painted canvas and affixed it to the wood. The result is an interspecies mixed media melange that spills off the panel's borders.

The cat in the window is a bit harder to digest, but its underlying virtues function like Ganter's decaying C-prints. When Ganter found the perfectly preserved cat, it had starved to death and its jaws, frozen with rigormortis, are wide open in a hideous silent howl as it appears to leap out of a wood box toward what looks like a lump of solid white fat. Ganter's offering comes too late for the tragic creature. But having found it already dead, Ganter has made its body into a totem for eternal renewal of lively feral creative activity in Mitte.