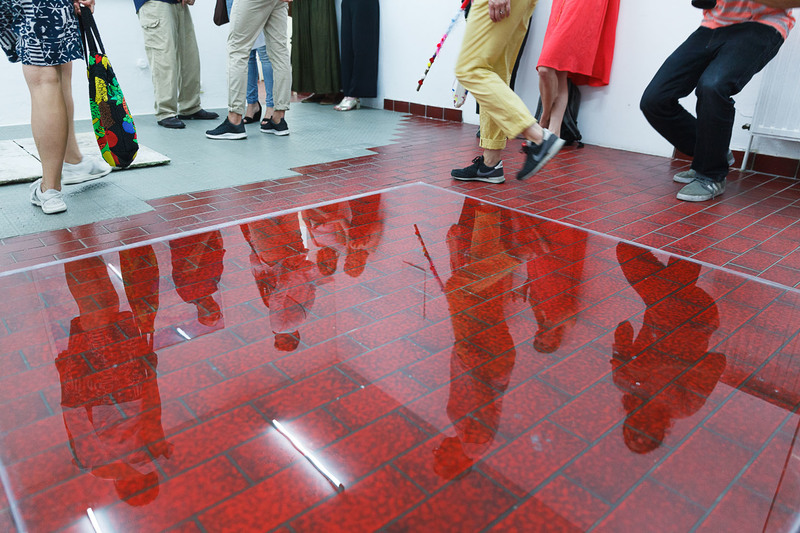 Where Is the Beach? Is It Under the Paving Stones?

The very notion is deeply romantic. A location of perfect tension, where the weather is honest and the sounds are cyclical. The Beach is that point in space where time and energy laps onto a surface, reworking it; constructing and deconstructing; giving and taking away. No less romantic is the notion that a “beach” surrounds us all under the tiles, asphalt, and paving stones of the city, beneath the constructs of our society. That it is always there, ever present, pushing up against the boundaries of what we know and what we see.

Inspired by the slogan “Sous les paves, la plage!” (“Under the paving stones, the beach!”) Melbourne-born, Berlin-based curator Sarah E. Davies recently brought together two artists from opposite sides of the globe in order to explore the binary nature of the beach. Conceived of as a two-part, site-specific conversation between artists Nicky Broekhuysen (Berlin) and Joseph L. Griffiths (Melbourne), the first installment took place in August 2016 in Berlin at centrum (the second iteration is planned at BUS Projects, in Melbourne, for January 2017). The Berlin project space seems serendipitously constructed for the exhibition and not the other way around. Small and intimate, the show artfully utilizes the space’s two-toned tiled floor to its advantage, not-so-subtly alluding to a receding shoreline. Davies and I sat together on this floor, straddling coast and ocean to discuss where the beaches lie. 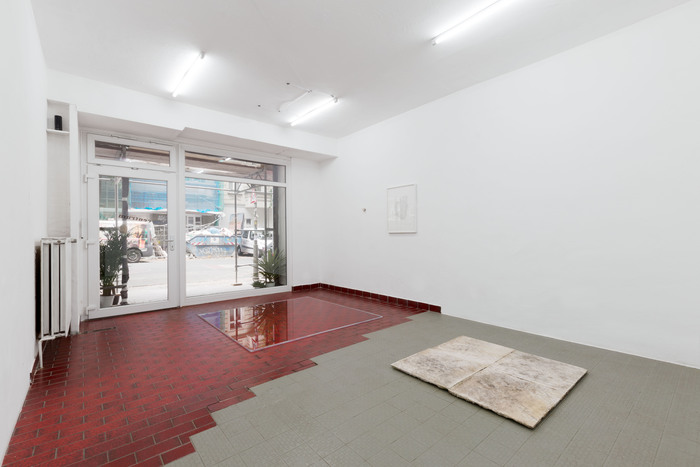 “The exhibition came about from discussion that Joe [Joseph L. Griffiths] and I began at the end of last year about wanting to do a project together in Berlin,” explained Davies. “He got this residency at The British School in Rome to work with a team of archeologists investigating archeological methodologies and performing geophysical radar readings of the ground surveying an ancient Roman port—kind of like a sonogram of the earth.” She produced a small screen showing rough, pixelated digital striations, scratches under the earth’s crust. “It’s usually hung over there” she gestured, pointing around the corner. A Coastline Made by Walking (2016), shows the markings of a coastal recession in an animated GPR—or Ground Penetrating Radar—single channel video loop, the result of fieldwork done by Griffiths and a team of archeologists in Rome along the coast close to the Fiumicino, Rome’s international airport. “So he knew he was going to be in Europe this summer. Through discussions about mutual interests and the Situationists, the quote about the beach came up and the interesting binary of what it can mean, what it is, and how it could be interesting looking at it from different angles in a non-political way.” 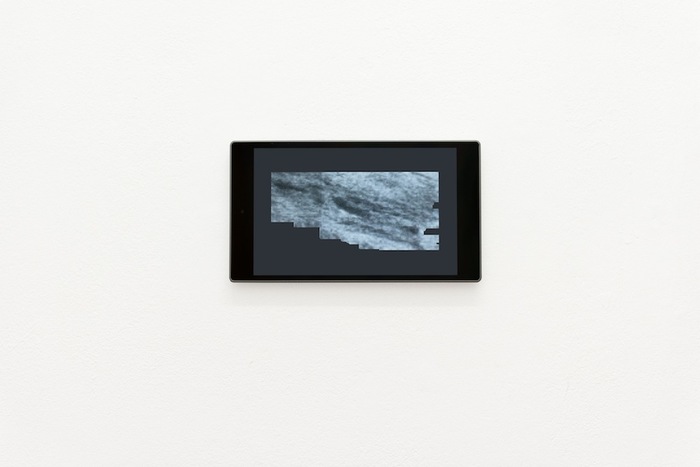 The quote—more a battle cry—does have its roots firmly planted in politics however, as a slogan sprayed on Parisian walls amidst the civil uprisings of 1968. Literally, it was taken as a reference to sand found beneath the cobblestones lifted by students to hurl at the police. The Situationists took up the phrase as a stand-in for their conviction that the city streets, as expressions of capitalism and consumption, could be subverted and discovered anew by drifting through them, discovering new connections and revealing unexpected histories. Davies told me:

As a curator my interest is concerned with perception and how through considered spatial and temporal interventions one can produce potent experiences. This project is consequently a collaboration with Joseph L. Griffiths and Nicky Broekhuysen, whose practices share a mutual interest in the human connection to our civic and natural environments, engaging in site and responding intuitively, dwelling in the meaning of making. They both rearrange the known to produce new meaning, shifting one’s perception and understanding of what was previously understood. 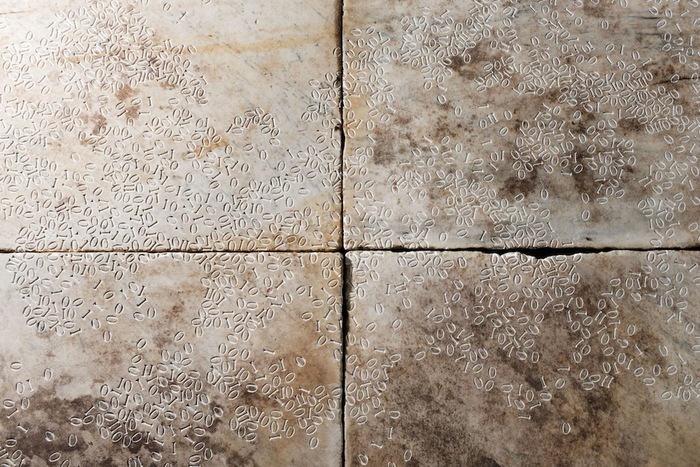 While wholly distinct in approaches and aesthetics, the thematic seams between Broekhuysen and Griffiths are at once curatorially made whole in the gallery. On one side of the tiled faux-coast is Landscape (2016) made up of a floor installation of four found marble tiles on which Broekhuysen has engraved 0s and 1s, the characteristic binary code that makes up the foundation her body of work. Here, on the floor, Landscape is a quite literal stand-in for the manmade coast, society, and civilization—a foreboding threat against the transient nature of the digital when faced with the permanence of nature. 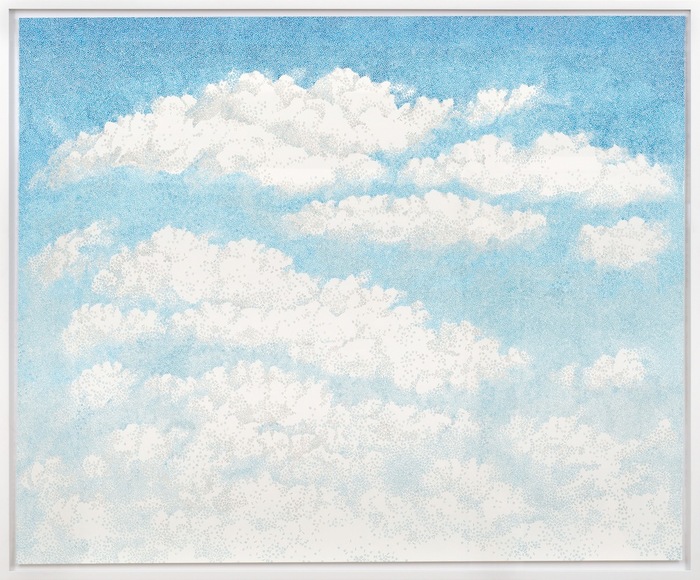 On the wall above, what seems like a drawing of clouds—In Pursuit of La Plage (2016)—dissolves into a web of hand-stamped oil paint 0s and 1s as you approach. Instead of encountering water molecules, the skies have opened up a network of binary information, a conversation in flux. The work begs the question of what the weather cycle has become. If not a cycle of rain, are we caught in another pressure system? It also, perhaps unintentionally, raises questions about civilizations’ impact on those cycles and natural phenomena, the environmental cost of progress, datafication, and a loss of what Davies referred to as “the wildness” in Broekhuysen’s work—how we might lose touch with what that wildness entails.

Sitting in direct opposition, on the other side of the shoreline, is Griffith’s Gutta Cavat Lapidem (2016), an ephemeral two-part installation that follows his line of research surrounding the geological formations of the terrestrial sedimentary rock travertine. Formed by the precipitation of carbonate minerals in the ground and surface waters, it is a pervasive feature of Roman monuments. On the floor a slight silicone frame constructs a shallow pool of water. Like a pane of glass, the pool magnifies the details below it and reflects life above, existing like a thin veil, a façade continuously interrupted by a series of drips dropping from an irrigation system rigged by the artist on the ceiling above. The resultant ripples, like sine waves, project slowly outward. Ovid’s Latin proverb “Gutta cavat lapidem, non vi sed saepe cadendo” (“The drop excavates the stone, not with force but by falling often”) comes to mind. Accompanying the pool is a sound installation of the sound of dripping water on found travertine tiles. The drips ring like muffled bells one imagines in a dampened cavernous mouth, somewhere overgrown and isolated. 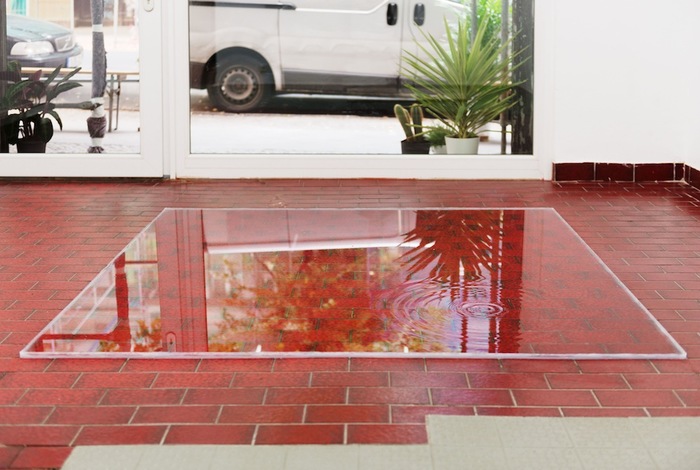 “We always had [Under the paving stones, the beach!] as a background,” says Davies, “but we knew that it would transition from that. So it did move away from the quote but it inevitably came back in the end, referring to it again. The initial working title was In Pursuit of La Plage—how you would get access to the beach in the city, and looking at that. But we ended up just with The Beach.”

The drop of “In Pursuit…” seems an important aspect of and wholly appropriate to the unpacking of these ideas. That constructed, forced return—à-la-Thoreau—in which retreat to nature is a personal declaration of independence, a choice, an experiment in self-reliance, is transcended. No longer is it about controlling our destiny, choosing when to return. Instead, the exhibition seems to be about the break down of these expectations, about an encounter, the unwitting dance between the constructed and the existing. So that nature becomes not a something “one can get to” but an inescapable reality that encompasses everything right below the surface waiting to bubble up or trickle down.

Nicole Rodríguez Woods is a San Juan-born writer and creative strategist based in Berlin. Her writing has appeared in various publications, including ArtSlant, Whitehot, Blouin ArtInfo, Eyeout Blog, and sugarhigh’s berlin art journal.