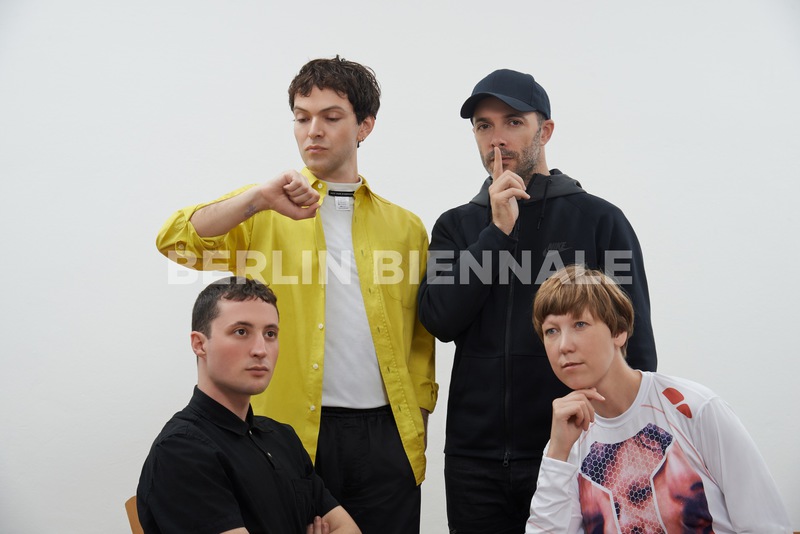 At the Berlin Biennale, Are DIS Pranksters or Practitioners of the Present?

A post-internet dystopian fairyland—this was my first reaction to the 9th Berlin Biennale for Contemporary Art, The Present in Drag. Curated by DIS, the art collective behind DIS magazine, the exhibition promised to be full of post-internet art, advertisements, and corporate aesthetics, as was made apparent by branding techniques and imagery on the Biennale website as early as 2014, when the curatorial team was announced.

In the weeks preceding the Biennale, posters were mounted outside KW Institute for Contemporary Art, one of the four Biennale venues, reading, “I want to die with nature, not become her manager.” An intriguing dynamic, for sure, and one that raises the question: how to approach the human through the non-human, so that the iconography that we often consider commonplace (McDonald’s slogans, Walmart superstores) can be shaken off, dismissed?[1]

While the curators do not describe themselves as accelerationists, nor do they explicitly situate the Biennale within this framework, DIS’s response to this question seems to espouse a radical accelerationist dogma: it appears to propose speeding up and embracing the processes of capitalism rather than countering it. Is this how we should read a Biennale where the art seems to embrace the ideology of capital, rather than positing itself as a reactionary agent of freedom? And, if so, have they succeeded in accelerating anything?

In the 9th Berlin Biennale, art is not utopian or an agent of change, but an instrument of the market, with images often meant to reflect the glossy apocalypse only an accelerated future can bring.

Appropriately, the Biennale’s communications materials, such as the promotional video, above, where marathon runners go down steps in Berlin, are also artworks—or are they? Credited as “Not in the Berlin Biennale” projects, these advertising objects hold the same gravitas as included works, and set a clear tone for the curatorial endeavor. “The 9th Berlin Biennale for contemporary art may or may not include Contemporary Art,” reads the text accompanying the video.

Though the humor was clear, and deeply resonated through my press package, I often felt that it mocked me rather than pushed me to the depths of humility, in the way that only great comedy can do.

Logo with stroller. Courtesy of Berlin Biennale for Contemporary Art

Appropriating this cynicism, as we walked through the Akademie der Künste presentation, fellow art writer An Paenhuysen noted the heterogeneous nature of the exhibition, quipping: “This is all the same artist, right? Just the same concept in different mediums?” Indeed, DIS is the artist that threatens to overshadow all the individual projects within the exhibition so that it feels hardly important to make distinctions between which piece belongs to Adrian Piper, Jon Rafman, or Trevor Paglen/Jacob Appelbaum. Their aesthetics, as well as their conceptual undertones, smoothly flow together, glossing over difference. The Akademie der Künst appears as a mega work, not a collection or accumulation of artists. Is this a curatorial accomplishment, where the conceptual jumps between works are not just invisible, but effectively non-existent?

The solidarity of these aesthetics only propelled me to make soliloquies upon flatness. Nevertheless, I wanted the works to speak more deeply to me, even though they often only echoed the narcissistic image of a world that I happen to also be living parallel with. I thought about Narcissus himself, who transformed into a rock, whose very thingness was a means for him to co-opt, perhaps reach jouissance, the immaterial “Echo.” 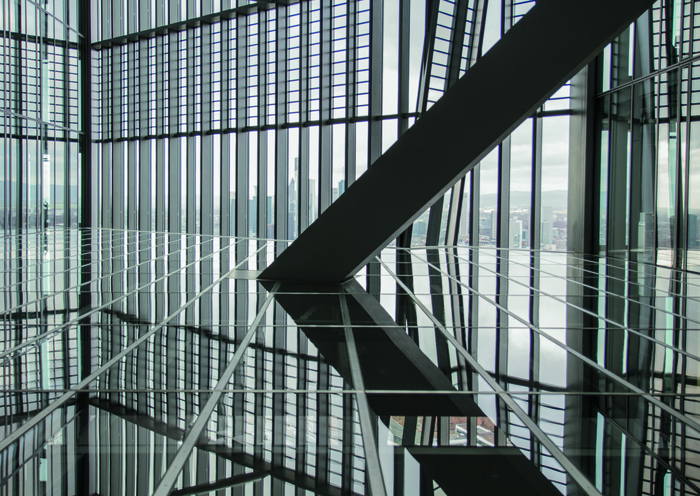 Discussing our contemporary moment, curator Lauren Boyle of DIS, spoke of “paradessence,” an advertising portmanteau combining paradox + essence. Paradessence is a product or service that satisfies material desires, dissolving the differences between consumption and production. DIS is playing with viewer’s satisfaction, where the audience is a key layer to completing the system of capitalism. The effect is almost like a Keren Cytter film, where the artist herself plays with the transcription, understanding that in this particular moment of consumer culture, our dramatic thresholds have been drawn from 20th century film. Yet shouldn’t acceleration strive for a limit, to go farther, not to daze and confuse, but to somehow shock viewers with the inevitability of the present?

Deterritorialization should reach a threshold to intitiate reconfiguration—thus accelerationists maintain. Not because they love capitalism, but because they hope for a new system, a new way of existing together in the world. Does DIS create the rubble for a new system to begin? How do they approach this monumental task? I would venture to say that they have not. They simply use aesthetics that could be called “futuristic” in order to hack into a philosophy that could, or should be truly radical. Instead, cloaking their project in irony, they bring us to a comedic threshold where it is only we, as viewers, who are humiliated instead of going further to the transformative task of feeling humility, experiencing aporia, undergoing a sea change taking us to the unpredictable next step.

Curator Solomon Chase said at one point, “we live in an age of big data, customizable sneakers, where people practice mindfulness, but have deep debt.” Chase underscores our age of customizability, and yet, as we are well aware, our options are always curated. What DIS does a very good job at is aggregating culture, juxtaposing rather than enforcing to the end. What is lacking is the break down, the dissolution, or even the acceleration of this culture that should lead to a type of freedom or at least an emptiness.

How to make discourse out of the given language of advanced capitalism? How to find a form of freedom—which is of course what art aspires to or should aspire to—through advertisement? Can we and should we is the question.

During the press conference, the curators discussed the site of Potsdamer Platz, and recalled how a friend, a Berliner, warned them to not be deceived by the architecture, the shine, the corporate chic, that which Rem Koolhaas has called “junkspace.” “This is Berlin, but this is not Berlin,” their friend told them. In other words, do not believe that this tourist destination is the authentic city: there is an older city beneath this veneer. Yet, like futurists, DIS seem to reject the authentic before-city, which could only promote a nostalgic viewing. They want to go farther, move forward, follow a line of flight. This kind of double movement is characteristic of DIS. Ironists, juxtaposers, ardent believers in the plastic real. DIS is paradessence, a chimera. 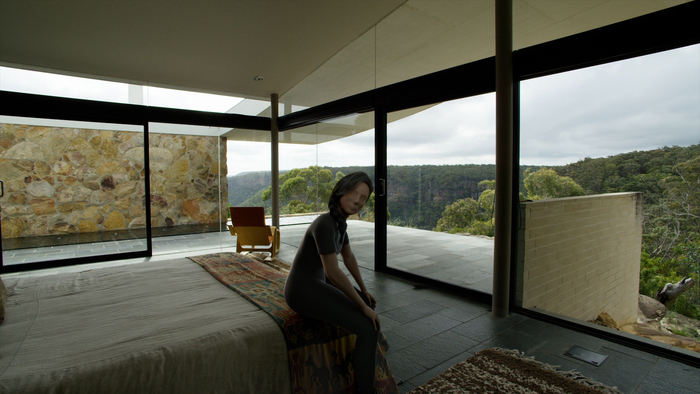 Accelerationism and technology traps us “at this limit as a point of struggle and contradiction,” Benjamin Noys explains in Malign Velocities.[3] In the Berlin Biennale, this struggle, this limit, becomes manifest in Endurance Study—A Pictoral Guide I, II, III by Cécile B. Evans. There is no clear narrative voice, just a series of stream-of-consciousness writing animated by a computer-automated voice. Evans plays with the slippage between human and non-human labor, how computer voices become the soundtrack of our lives.

The video sequence offers several parables meant to represent ethical knots. For instance, “some humans are tied to train tracks / they are going to die / you have the chance to move the train but saving them will cause other problems…” The voice narrates and concludes: “What if all solutions lead to more people tied to tracks?” In this eerie and utterly sad video, Evans plays with the conundrum of “evil redistribution” under the guise of making things better, such as American drone strikes in Pakistan—something that Evans does not explicitly reference, yet this is clearly not a simulacrum.

The Biennale left me with a sense of dread for its Machiavellian outlook, where the ends justify the means, but the means are just as evil as the precipitating danger. Is this the terrorist loop of our present, where competing ideologies are drafted into the dominant political theatre, forced into counter-warfare that only loops and has no end? Is this the emptiness that comes at the end? 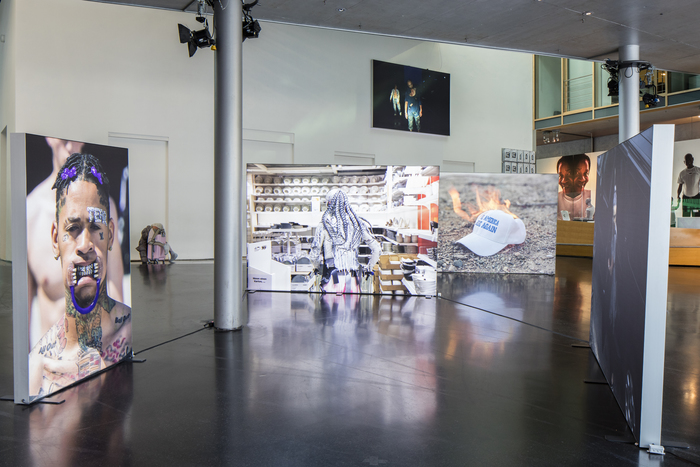 Other artists took different approaches, in the exhibition sector “LIT,”[4] for instance, a project bringing together several artists working with light boxes, which are scattered across the Academie der Künste. This is a “show within a show” that the exhibition catalogue calls “the hyperlinked landscape of our incomprehensible present.” One light box, Bjarne Melgaard's SUPREM(E), shows the image of a man with the words “I Love Dick” sewn into his blazing red jacket; another light box has the image of a burning hat that says “Make American Great Again.” These photographs certainly do not promise to decode any present or push an ideology to the breaking point, but perhaps make our present image iconography only more bridled with confusion: a millennial culture that can only speak through the rubble of our plastic world.

Like Deleuze and Guattari sadly and ironically alluded to, and which is the apparent refrain of the Biennale, we haven’t seen anything yet; let the image take us farther and farther into destruction. As contemporaries, we are all images of Tiqqun’s Young-Girl,[5] who, fraught with the depressing and conclusive reality that she will become an object and lose her subjectivity, accelerates the process in order to co-opt the image itself. Sadly, it seems, the image we can co-opt is dreadful.

[1] As Benjamin Noys writes: “It is in this double dynamic that accelerationsim finds its theorization, answering deceleration with the promise of a new acceleration, driven by faith in the new productive forces that come online and disrupt the ideological humanism that tends to be capitalism’s default ideology… Accelerationists reject this “humanism” by embracing dehumanization.” from Noys, Benjamin, Malign Velocities: Accelerationism and Capitalism, (Winchester, UK: Zero Books, 2014), p. 11.

[4] “This is a format that works for everything: the ubiquitous commercial interface of large-scale lightboxes… As a ‘show within a show,’ the lightboxes form a discrete platform within the 9th Berlin Biennale, adopting the visual codes of a duty free shop and the psyche of a Pinterest Pin Board.” (DIS, press materials for LIT.)

[5] Tiqqun is a French anarchist collective that also might be the Invisible Community. Preliminary Materials for a Young-Girl is a sort of manifesto that uses fragments and quotes to narrate the subject/object’s mythology. Tiqqun has been the inspiration of several artists as well as referenced in Anthony Elms’ curatorial practice.

What Can LARPing Bring to an Art World Obsessed with the Present? Brody Condon
9/15/16

Basel 2015 Trends: Irony Rules at the New Rhy Art Fair
6/19/15
COMMENTS (1)
The Outsized Ego of a Curator
Ms. Gravenor, you've written a piece (a fine bit of writing) about the curators of a biennial. There is something wrong here. A curator's job is custodial. It is a behind-the-scenes profession. DIS with its obvious outsized ego has perverted this and made the artist play second fiddle. Shame on them.
Comment by: Robert Wallace on Wednesday 06/15/16 at 4:34 AM
ArtSlant has shutdown. The website is currently running in a view-only mode to allow archiving of the content.