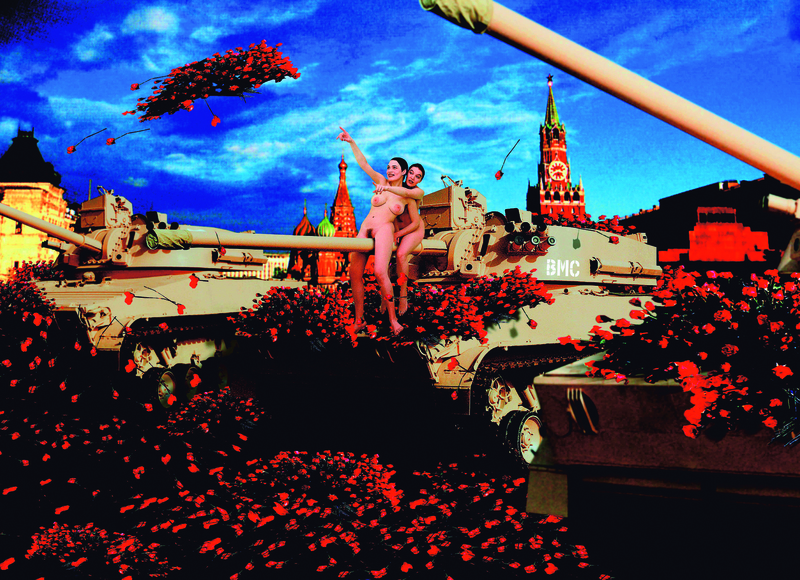 Dissent and Resistance in Post-Soviet Art: Carnivals, Clowns, and Slapstick as Political Tools for Today

Two uniformed Russian officials stand among snowy birch trees, the pale forest background in contrast to the grey, bureaucratic foreground of their uniforms. It could be a chilling, serious scene, and yet, the whole effect is undone by the fact that these “officials” are locked in an intense kiss, hands clasped on each others’ buttocks: an absurd, yet tender reversal of the crackdown on “gay propaganda” in Russia.

Kissing Policemen by contemporary Russian provocateurs The Blue Noses Group stands tall with others from the series An Epoch of Clemency in Berlin’s Kühlhaus am Gleisdreieck, where, along with two other locations, the Nordwind Festival is presenting art and performances from Northern Europe. This is the first time that the festival includes work from Eastern neighbor Russia and former Eastern Bloc countries. The exhibition BALAGAN!!! Contemporary Art from the Former Soviet Union and Other Mythical Places, comprises the extensive visual arts side of the festival, featuring 150 works by 74 artists shown across three venues, each with a slightly different focus. The performance program, which includes six German premieres, takes place at the Volksbühne and Sophiensaele. 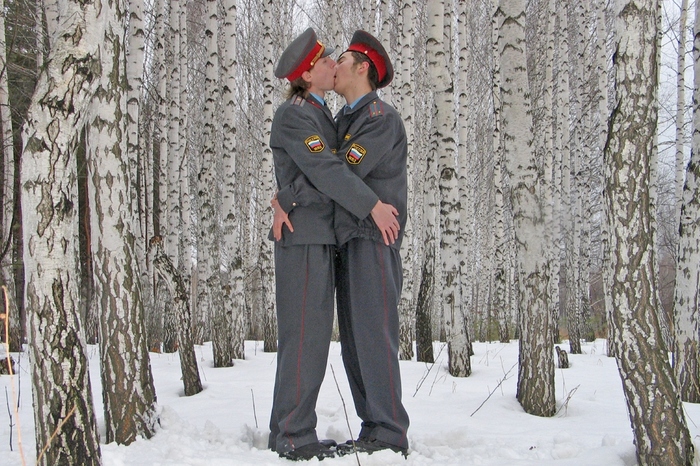 Blue Noses Group, Kissing Policemen (from the series An epoch of clemency), 2005. © Courtesy the artists

As Kissing Policemen shows, contemporary Russian art often approaches its country’s repressive politics with a comedic sledgehammer—which the festival’s program links to the concept of “Balagan!” an untranslatable term meaning something like “unholy chaos” or “cock up.” In practice, this means that the works journey into the grotesque, the mythical, and role reversal, which, as visual arts curator David Elliot explains at the press conference, “allow us to put things in perspective.” Creating humor out of absurd political situations is a strategy that is well-documented anthropologically, but the commitment and riotous energy behind these efforts is notable here: from Katarzyna Kozyra’s Cheerleader (2006), featuring an amateurish Madonna cover playing over a genderbending locker room scene, to Kristof Kintera’s evil drumming creature, Bad News (2011), whose rhythmic tapping infects the whole location. We’re presented with alternate, provoking realities, ranging from the good, the bad—to the just plain weird.

But why does contemporary art from the former Soviet Union in particular choose to cackle sardonically at its own power structures? Partly, it’s a strategy that has been picked up from mid-20th century artists: how could artists not poke fun at their leaders when the boundaries of the nations they knew have been broken down and built up again before their eyes? Artists across the former Soviet Union have had an exceptional experience of power and national sovereignty. Viktor and Elena Vorobyeva touch on this absurdity in their photo series Kazakhstan. Blue Period (2002–2005), which depicts the wholehearted enthusiasm with which the Kazakh people threw themselves into the post-Soviet designation of a clear, bright cyan as their country’s national shade—the country’s best-selling shade of paint—named with a wry nod to art history. The Soviet history is what makes this absurd: it is hard to imagine a Western artist discussing the subject of repetitive nationalism with the same tender, yet shoulder-shrugging humor. 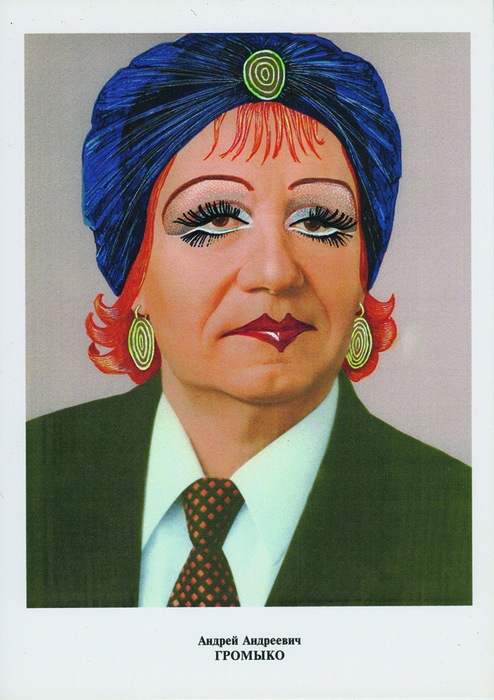 There’s also the influence of commedia dell’arte, which underwent a revival in Russia immediately before and after the Revolution, inspiring artists both in content and approach. For example, the video work The Fall Of Washington by Blue Noses Group acts as a hilariously satirical role-reversal of the western attitude to the USSR: a silent Punch and Judy show, proposing to free those enslaved by the shackles of American “democracy.” Many of the works feature commedia dell’arte characters figuratively. For example, the figure of Pierrot makes a very visible appearance in Olga Chernysheva’s modern-day version of the pantomime character, as security guard, the ubiquitous figure in a post-9/11 society. Again, why do these comedic characters continue to appeal so strongly to artists in a post-Soviet tradition? When social and governmental codes have shifted so vastly in less than one lifetime, perhaps a better question is, “how could they not?”

Sometimes, though, you don’t have to turn anything on its head to elicit humor. This is particularly clear in the video works QUEUE by Sasha Pirogova (2014) and White Lines–on the Ground, Dark Lines–in the sky by Olga Chernysheva (2012). In each video, a typical daily activity turns into something repetitive and farcical by the detail in which we’re watching it. It’s an apt reminder that there is nothing more worth ridiculing than the hegemony of the status quo. 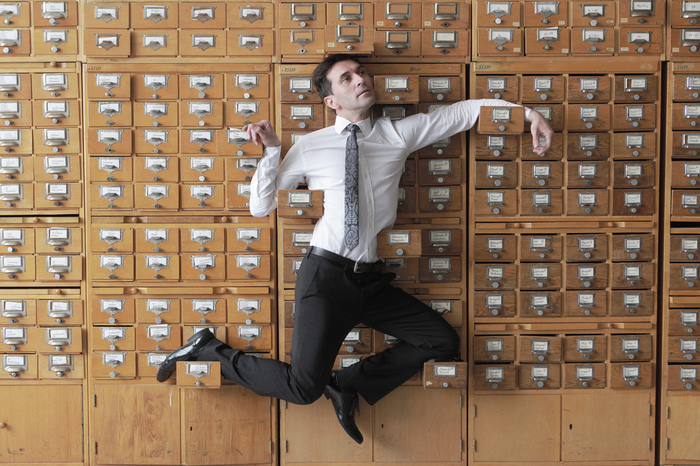 Balagan!!! Contemporary Art from the Former Soviet Union and Other Mythical Places is on show 14 November 14–December 23, 2015 at Momentum, Stiftung Brandenburger Tor im Max Liebermann Haus, and Kühlhaus am Gleisdreieck.

Posted by Josie Thaddeus-Johns on 12/11/15
Tags: Balagan, Nordwind Festival, art from the former Soviet Union
RELATED ARTICLES
COMMENTS (0)
ArtSlant has shutdown. The website is currently running in a view-only mode to allow archiving of the content.