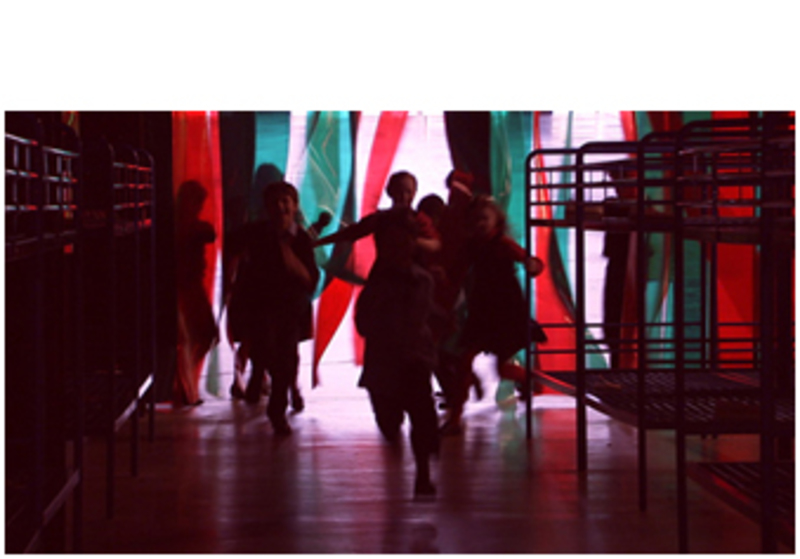 French artist Dominique Gonzalez-Foerster’s current exhibition at Esther Schipper Gallery, Return to Noreturn, revisits and rewrites her 2008-2009 exhibition TH.2058 at the Tate Modern’s Turbine Hall. Return to Noreturn hovers between documentation and fiction, its semi-narrative arc held together by two videos filmed at the Tate during the last week of her show there. Though the videos are records of the previous exhibition, they deliberately stage a new story, cycling between past and future as the title of the show suggests. Against the backdrop of TH.2058, which was a speculative imagining of the world in 2058, the paradoxical exhibition at Esther Schipper elicits profound nostalgia for an imagined future, forming a metaphor for the impossibility of return.

The exhibition’s pair of videos reference science-fiction visions of the future, accompanied by lyrical subtitles that read like quotations from a dystopian novel. The first film, Noreturn, finished in 2009, portrays a group of children in school uniforms who invade the Turbine Hall exhibition, playing and chattering on the empty metal bunk beds on display. Eventually they exhaust themselves and slowly fall asleep in a beautiful tableau, their legs and arms splayed out atop books from the exhibition such as Perec’s Un Homme qui Dort and Enrique Vila-Matas’s El mal de Montano. About halfway through the video, fragmented subtitles begin appearing in the movie, providing thoughts that could be one of the children’s inner monologue:

in this dream, it is endless

we have gone beyond the point of no return

we stay there in front of the screens

as if we were in a gigantic airplane

traveling without a destination 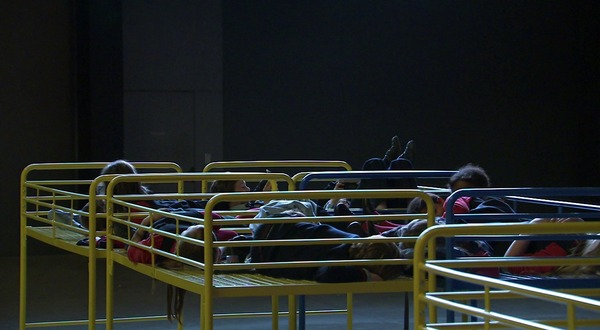 In the second video, Romilly, which is presented for the first time in this exhibition, we get closer to one of the children in particular. Via the subtitles, the little girl we follow is likened to Dorothy in Joan D. Vinge’s novel Return to Oz: “She has become a melancholic child who cannot sleep, as she is obsessed with her memories of Oz.” An archetype for the impossibility of a return to childhood, the reappropriation of Dorothy in this context implies a possibility for catharsis through speculative fiction.

Visitors are compelled to cycle several times around the exhibition space. Upon entering, one must immediately pass through a green-red plastic curtain, an element that appears in the films, suggesting a break from the outside world and an entrance into a hermetic space of speculation. Pushing through the curtain, one is confronted immediately by a large text on the facing wall assembled from the subtitles of Noreturn. Both lyrical and visually captivating, this text introduces the viewer immediately into the logic of the exhibition, quietly suggesting an inner monologue for the viewer to carry throughout the space. Also present in the gallery are four of the bunk beds and several stacks of books from the Tate. The tapis de lecture, a carpeted reading space with books, is a common element in many of Gonzalez-Foerster’s installations. She encourages the audience to browse, discover new reference points, and draw in a wide variety of outside material. In this way her exhibitions signify beyond themselves, creating what Enrique Vila-Matas calls “a culture of the quotation.” 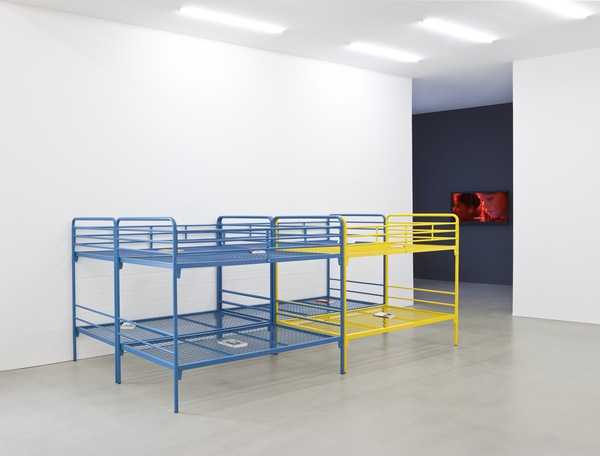 The selected books are at once artifacts of knowledge and generative material, which the artist compounds and contributes to. It is in this generative or collaborative sense that Gonzalez-Foerster’s work is exemplary of the better aspects of relational aesthetics; she actively attempts to forge contextual connections between people rather than fixed or static object-experiences. In a 2008 interview, she said, "I remember feeling shocked at how little time people spent in front of each artwork. So today I want to coax people to engage with my art, in the same way that a writer might entice people to read a book…. I hope that some rituals will emerge which are completely unexpected."

Return to Noreturn finds meaning at the juncture between linear narrative and spatial construction, in a place that could be called poetic. It is in poetry that text breaks from linearity and encounters spatial experience. Like the disorienting light that diffracts through the red and green curtain at the entrance of the gallery, Gonzalez-Foerster’s work allows meaning to diffract, shifting away from the rituals by which we are used to accumulating knowledge and splintering into rays of infinite speculation.