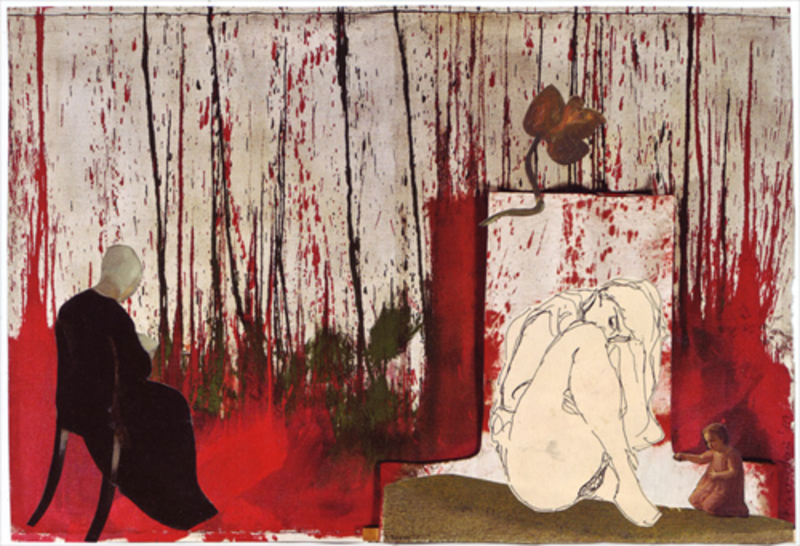 War. Domination. The carnal groping and seizure of outer resource to satisfy the psychological and physiological ravenous. Desire to satiate famishment, cognizant and subconscious. Gluttonous fear desperate to actualize, achieve control. Definitive status. Chaos turned system. Greed – longing, lust on manic and depressive scales. Broadened and broadening extremes. Succession and oppression of one, millions. The invasive seep downward to uproot, expose. Merciless clawing into. To pit. Sap other of means to maintain own homeostasis. Whether by wielding words in the mind, media or use of precision technology and brute machine by air, land, water - war is abusive force to take over. The assassination of what or whoever leads. Abolition of constructed governing entities. Whatever lies at the center, generates pulse – determined eradication. Downfall, dissolving and disintegration. Massacre, murder, loss. Ruin. Subversion. Bruise. Barbed wire. Bomb.

Peace in comparison, a symbiosis. The will to understand, unite. The exploration of the quintessence of another, a nation – mindful of mutual gain. Aim to uncover and maintain communal tranquility. Courage mounting. Perpetual disarmament of senses. Experience and experience. A continual bowing out, stepping back. Allowing the weaker presence voice, value. Opportunity for fortification. An increased sense of identity, ambition to link and evenly plow amongst. Altruism at its finest. The clasp and tightening of particle and panorama. A concert of ways, saw and pluck of strings and breath in brass in efforts to achieve harmonic means. Responsiveness and reciprocity. Synergy, alive and afoot. Olive branch. Dove. Prism. V-sign.

Spirituality and religion – mankind's make-shift transitional passages between the ravines of these two proportionate ratios. Scaffolding on which societies then ivy up, splay, fruit and feast amassed knowledge, skills, values. Aesthetics basking, blossoming in the refracted rays. The tender turbine and tendrils of civilized, creative people. Art – perhaps the supremest form of non-violent resistance. To craft into tangibility what one knows towards shared enlightenment. Proactive intervention. Forms that are found and find, given and give, give rise to, appointed and appoint, mothered and mother. That out of arousement, invention – arouse and invent.

"A man in motion always devises an aim for that motion. To be able to go a thousand miles he must imagine that something good awaits him at the end of those thousand miles. One must have the prospect of a promised land to have the strength to move." War and Peace, Tolstoy

Each artists' work - merely a specimen of this promised land . . . for which they were moved to create.