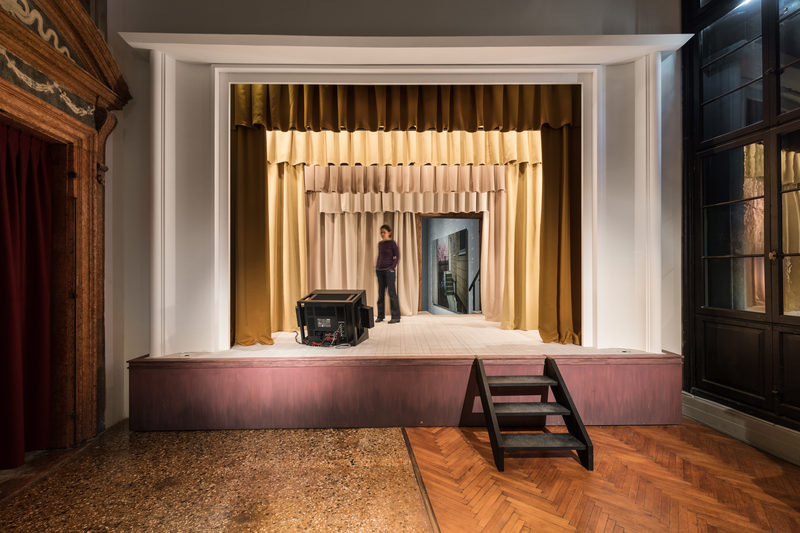 The End of Modern Curating and Artists’ Revenge

But what about Documenta 14? Even though the opening of the Athens leg took place barely six months ago and the Kassel portion even less, I draw an absolute blank when asked to name favorites. Not one single work stood out to be filed by that picky librarian living inside my head. My memory of Documenta 14 is more of a general impression and not a very positive one either. Bland, academic, bloodless and downright mediocre are qualifications that readily present themselves. 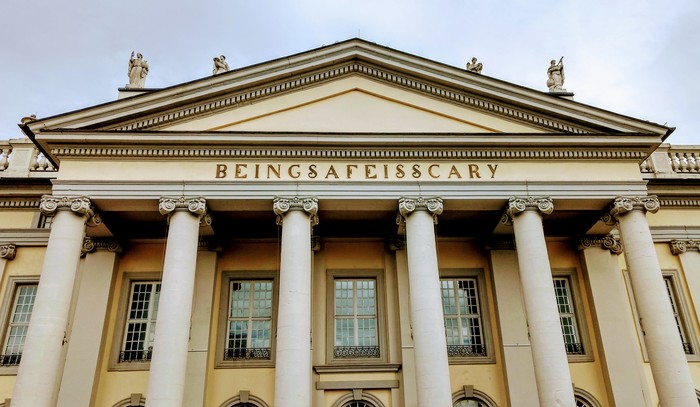 Documenta 14 director Adam Szymczyk put so much stress on his message that it overshadowed the medium, effectively obliterated the art on display. Having said that, pinning down the exact meaning and intention of that message is no mean task either. Documenta 14 touches upon a whole range of issues, from gender identity and climate change to historic representation, the fate of indigenous people, and censorship. All this is thrown together and presented without a real framework and scattered across dozens of hard to find locations, turning a visit into a quest without catharsis or reward. Moreover, it diminishes the art experience. Or, as Sleek editor-in-chief Jeni Fulton rightly stated in a blistering critique of Documenta 14: “When the political or ethical imperatives override artistic claims… it results in an exhibition where the art on view is not treated as art, but as footnotes to an assemblage of post-colonial narratives.”

Documenta 14 is not alone in its failure to reach for artistic excellence and inspire enthusiasm. It’s rather a symptom of a more widespread trend. Until not so long ago large scale international exhibitions were showcases for the current state of the arts. They were or aspired to be scouts taking point in the search for the best, most innovative, most prophetic or—indeed—most “present-defining” works of art. Of course, this entailed a certain ideological disposition: what excellence is depends on what you believe to be the direction, meaning, and driving force of excellence. Documenta is a prime example. It was deeply politically motivated from the start, a showcase for Western modern art—read: mostly American or American-inspired abstract expressionism—symbolizing the victory over the Nazi-ideology which would have labelled it “degenerate.” Moreover, it was a soft power campaign advertising the glory of capitalist Marshall-plan reconstruction in a provincial town only a stone’s throw away from the Iron Curtain. 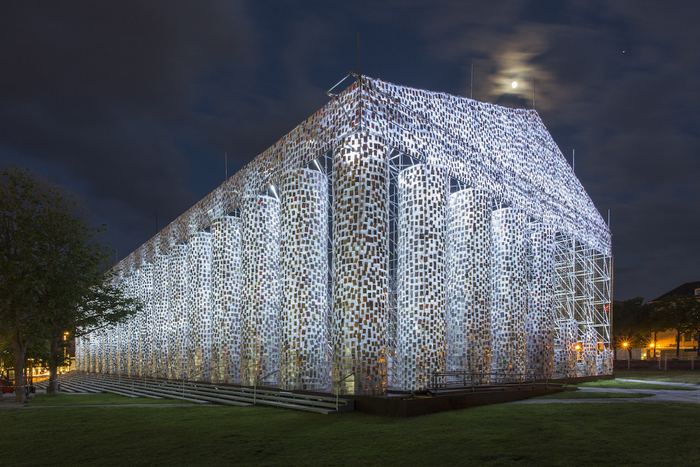 However strong or even decisive these undercurrents were, they were exactly that: undercurrents. They weren’t in your face, explicitly looming over every single work on show, reducing them to illustrations. The expressive power of the individual artwork—and with it, the artist’s autonomous position—remained intact. Over the last forty to fifty years this has changed. The attention has shifted from individual works to compositions of works. The large-scale exhibition itself has become the actual focal point, an ephemeral meta-artwork in which paintings, sculptures, videos, and drawings are demoted to the position of building blocks or raw material. Art criticism has developed parallel to this trend. Instead of judging the merit of individual works the emphasis has almost entirely come to lie on the framework holding them together. Thus, shows presenting great works could be deemed mediocre because of their weak collective narrative. Vice versa, some shows are awarded five star reviews because of a compelling story, no thanks to the dull content it’s imposed upon.

Curatorial storytelling flourishes in the biennial-circuit, which has boomed over the past twenty or so years. From Yokoyama to Panama City and from Cairo to Ushuaia—every major city in the world seems to have a biannual art event nowadays. And they all present high-concept shows addressing urgent contemporary issues—perceived or real. Even the oldest and most important of them all, the Venice Biennial, has moved in that direction. Even though it is still largely a patchwork of national highlights, almost like a World Expo specialized in art, its center of gravity—the central pavilion at the Giardini and the Arsenale—has since the 1980s become a canvas for the biennial’s director to paint his or her message on. 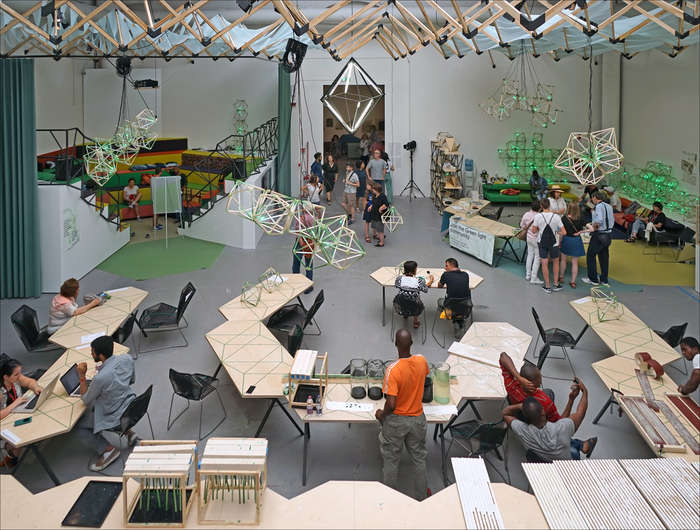 After rather strong presentations by Massimiliano Gioni (Il Palazzo Enciclopedico) and Okwui Enwezor (All the World’s Futures), this year’s Viva Arte Viva by Christine Macel has turned out to be a disappointment. The empty wording of the introductory catalogue text should have been a telltale sign. Macel talks about our current world in conflict and humanism being under threat, and describes her exhibition as “chapters of a book.” But worse is her statement that “Viva Arte Viva is a Biennale designed with artists, by artists and for artists…” Reading this, one inevitably asks oneself: and what about the audience? Are we, the viewers, mere passive bystanders who should feel privileged to be granted this insight into the realm of art? Shouldn’t art not only be about the world but also of that world? Presenting art as a bubble apart from daily life, Macel seems to be diametrically opposed to Szymczyk, who awards art a secondary, reactive, and subservient position vis-à-vis “the real world.” But they both stumble into the same pitfall. Macel’s celebration of art’s inherent power is first and foremost a narrative, a concept overruling and framing all individual works. Of which, once again, not many are very memorable.

This year’s poor performances of Documenta and Venice inspired German critic Stefan Heidereich to write an article in the Zeit newspaper entitled “Get rid of curators” (which ended up on English-language website &&&Journal under the slightly less rabid heading “Against curating”). He traces the roots of what he calls “the curatorial epidemic” back to Documenta 5 (1972), directed by Harald Szeemann. Standing on the shoulders of Alexander Dorner, a German art historian working in Hannover during the 1920s and 30s, and former Stedelijk Museum director Willem Sandberg, to whom he attributes the title “the inventor of modern curating,” Szeemann launched himself as the world’s first “star curator.” It signaled the start of a tectonic shift within the art world, radically changing its dynamics. Until then curators had been producers, enablers, or facilitators, their work low-profile and behind the scenes. But ever since Szeemann introduced the idea of the “total artwork” and identified the curator as its prime instigator, curators have become headliners stealing the artists’ thunder. The contemporary curator is the DJ of the visual art world, sampling other people’s original work and presenting the result as unique intellectual creativity. 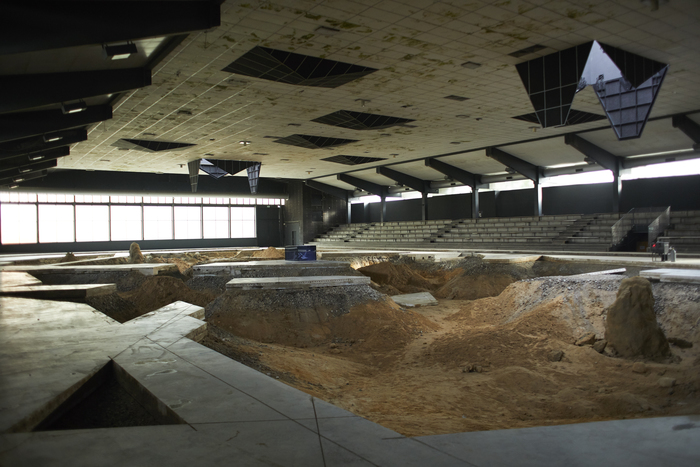 Of course, there still are some “old fashioned” curators around compiling “old fashioned” shows. For example Kasper König, whose Skulptur Projekte Münster turned out to be one of this summer’s highlights. König is by no means lacking in ego and pomp, but in his role as director he deliberately chooses not to smother artists and their works with his need to personally express himself. That renders Skulptur Projekte Münster a true, many-faceted presentation of the state of the arts. Some of the works of earlier editions—SPM has been held every ten years since 1977—have been acquired by the city of Münster and are on show permanently. Like a magnificent outdoor archive, they document the evolution of contemporary art. The current edition presents works very different from the monumental modernist works by Judd, Oldenburg, or Rückriem. In a highly stylized installation Hito Steyerl comments on the use of robots in warfare while nudging at the retro-futurist bank interior that serves as its venue. Mika Rottenberg projects a video about immigrant workers crossing the border through tunnels in the storage space of an Asian food market. And Pierre Huyghe phenomenally transformed an indoor ice skating rink into the set of an apocalyptic science fiction film. Individually these works mirror and reflect on an array of contemporary issues, but together they outline today’s world and art’s response to it. The art itself speaks—not the curatorial straitjacket. 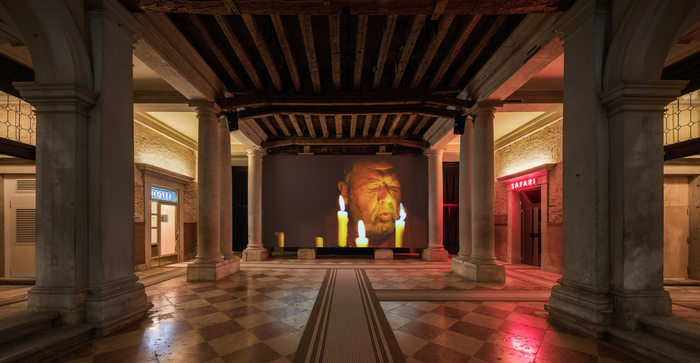 However, dismissal of the curator-driven model doesn’t necessarily imply a return to the exhibition as a collection of great works each telling their own story. Nor should it. A meaningful transcending narrative is still possible, as proven by the outstanding group show The Boat is Leaking. The Captain Lied. The venue is Fondazione Prada, which four years ago presented a critically ironic remake of Harald Szeemann’s 1967 iconic exhibition When Attitudes Become Form. The current exhibition is curated by Udo Kittelmann but it’s got the contributing artists’ fingerprints all over it. Anna Viebrock’s theatrical installations serve as a immersive backdrop for Thomas Demand’s photography and Alexander Kluge’s films but at the same time anticipate and react to them. It’s an example of perfect interaction—a “total artwork” in Szeemann’s terms—between three artists playing equal parts and obviously feeling emboldened by it. Case in point is Thomas Demand, who is known for mystifying his work and refusing to reveal background information. In Venice he has absolutely no qualms identifying a porch as belonging to the Boston Marathon bomber Tamerlan Tsarnaev or a repository of films as Leni Riefenstahl’s, the German director famous for her 1938 Nazi propaganda film Olympia. The explanatory texts don’t reduce the work to the level of educational material, as artists often fear, but rather add to the experience. 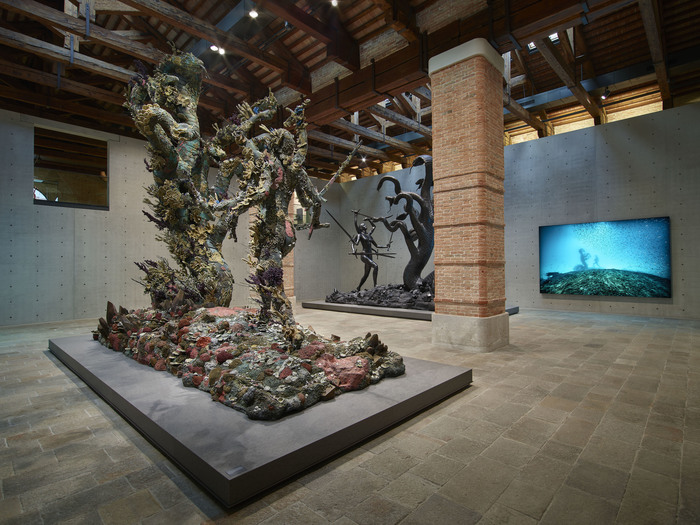 A mere vaporetto ride away an even more radical example of “post-curatorial exhibiting” can be viewed: Damien Hirst’s Treasures from the Wreck of the Unbelievable. For this megalomaniac solo Hirst concocted an elaborate story about an art collector from ancient times, whose ship loaded with prize pieces sunk at high sea and was only recently rediscovered. The finds, covered in colorful coral and all, are exhibited at the Punta della Dogana and Palazzo Grassi in the best fashion of archeological show pieces, with lots of glass casings and attention grabbing spotlights. Even though Hirst drops more than a few not-so-subtle hints—Mickey Mouse and Die Antwoord’s female rapper Yo-Landi Vi$$er are easily identified, and the bust of the collector looks very much like Hirst himself—the overwhelming ensemble looks convincing enough to leave visitors confused about its ancient authenticity. As such, it’s a fitting commentary on contemporary society’s post-factual condition. It’s a satirical parody on the manipulation of history and its perception. In his bronzes and marble statues Hirst mixes and matches Aztec, Hellenist, Egyptian, and Babylonian symbols and styles in order to create a highly realistic fiction. Joseph Goebbels, Hitler’s propaganda chief who happily borrowed from Indian and Nordic mythology, would have been jealous. 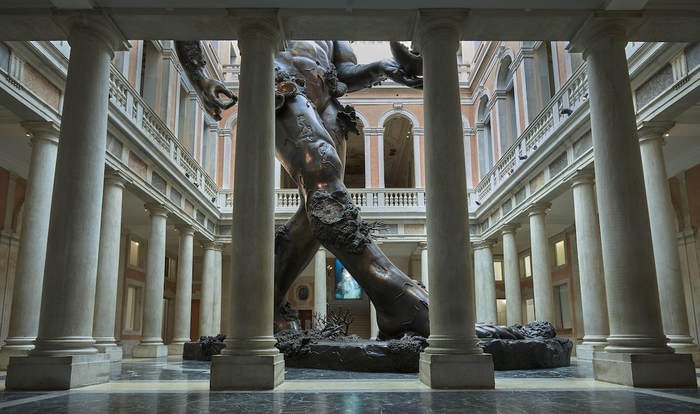 Although Hirst—as always—overdoes it and overfeeds his audience, it doesn’t diminish his show’s undeniably strong conceptual punch. Besides a clever and consistently executed play on historical perception, it’s a demonstration of power by an artist claiming the job of curator as his own. Damien Hirst, the ultimate shapeshifter of the art world, has never been satisfied with a role as mere producer of art. He runs his studio like a manager or businessman. Backed by collector Charles Saatchi, he has taken on the role of promotor, catapulting the Young British Artists into the international limelight. He has even taken on the role of dealer, sidestepping his own gallery, by organizing a record-breaking auction of his own work. And he’s a collector owning more than three thousand works by Picasso, Warhol, Bacon, and the like. In Treasures from the Wreck of the Unbelievable he gets to play all these roles at once. Hirst himself has become the total artwork. Of course, he employs people to make sure the lighting is just right and the statues are in the best possible order. And who knows, he might even call them curators.