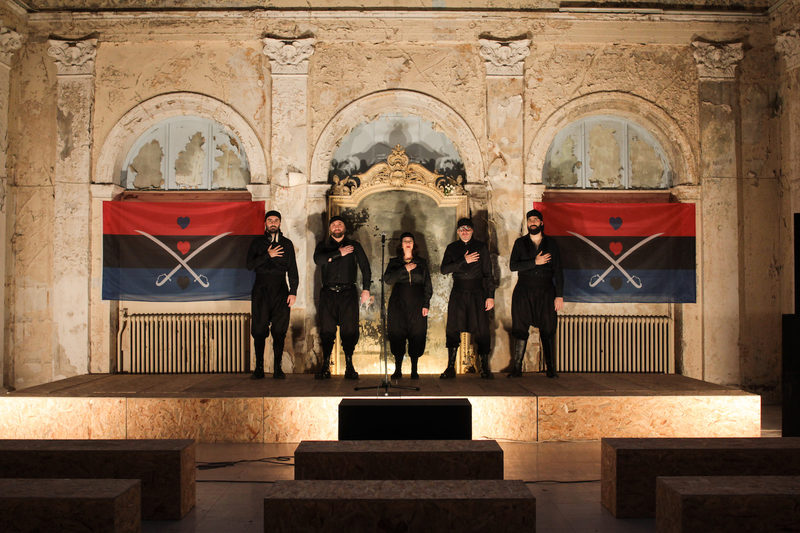 For Athenians, the presence of Documenta in Athens has raised a number of questions, including most importantly: how will this German-funded meta-exhibition transform the city, and what will happen after it has run its course? Yet for most Athenians, Documenta 14, whose tagline is “Learning from Athens,” will likely go unnoticed or even appear superfluous against the burdens of everyday life in the Greek capital. To be clear, while the exhibition does include Athenian and Greek artists, and while the public programs open their important discussions to a wider public audience, recognizing and incorporating its criticism, its visibility and attendance is likely to remain restricted to international visitors and the city’s growing art scene. In a city reeling from six years of politico-economic distress and an unresolved lack of dignified housing and basic services for refugees, Documenta 14 could amount to a spectacle where “the Germans,” who have been vilified in the Greek media, proclaim, “Let them eat art!”

This critique is not intended to devalue individual artists or artworks in Documenta 14—several of them ably contribute to ongoing and important discourses surrounding the current political situation in Athens and abroad—but rather to consider the exhibition’s symbolic gesture of relocating from Kassel to Athens and Kassel at a traumatic nexus in Greece’s history. At the inauguration of Ross Birrell’s controversial artwork The Transit of Hermes, a 100-day transnational horse ride from Athens to Kassel, Artistic Director Adam Szymczyk stated that “it’s a physical act before it becomes a metaphor or allegory.” Yet the artwork, which invokes not only Greek mythology but also the modern Greek nationalist avatar Alexander the Great with his horse Bucephalus, is an obvious provocation in an exhausted political climate. Birrell’s work caricatures the ultimate inability to extricate an artwork from its exhibited context, even despite expressed intentionality. 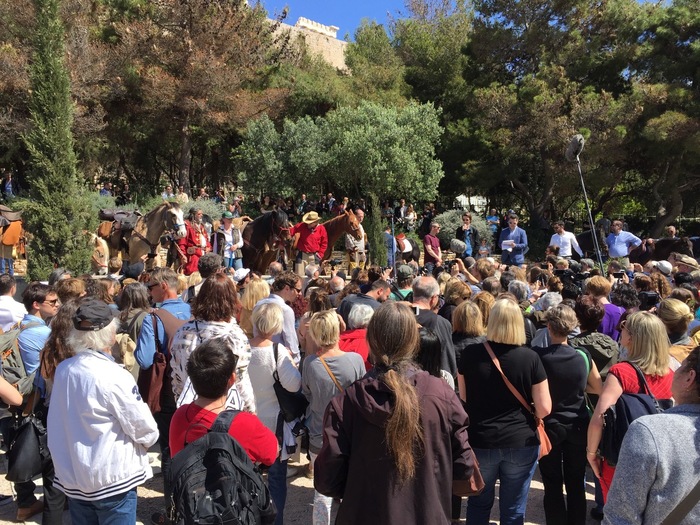 Athens departure of Ross Birrell’s The Transit of Hermes. Photo: the author

But provoking Athenians is nothing new for the team of Documenta 14. In the two years leading up to the Athens opening, following its announcement in 2015, specific information about the exhibition, such as participating artists and venues, was actively withheld from the public until the last possible moment. This intentional obscurity conjured an environment of heightened anticipation with an added dose of skepticism, evoking reactions from Athenian artists and researchers. Before Documenta 14 opened on April 8, triggering an avalanche of performances, events, and exhibitions, a handful of formally unaffiliated initiatives emerged with one thing in common: some kind of orientation toward Documenta 14. These initiatives range in approach from objective study to artistic reflection/reaction, embodying a fashionable, if understandable negativity.

One such initiative, Learning from Documenta, identifies itself as a research project situated between anthropology, art, and the media, and was established to critically observe and discuss multiple aspects of Documenta 14’s presence in Athens. Coordinated by Greek anthropologists Eleana Yalouri and Elpida Rikou, Learning from Documenta examines the gaze of Documenta 14, how this impacts what the institution “learns” from Athens, and the dynamic its presence creates in the city. The research project held its first public event in June 2016, sharing its mission alongside a presentation by Szymczyk himself. 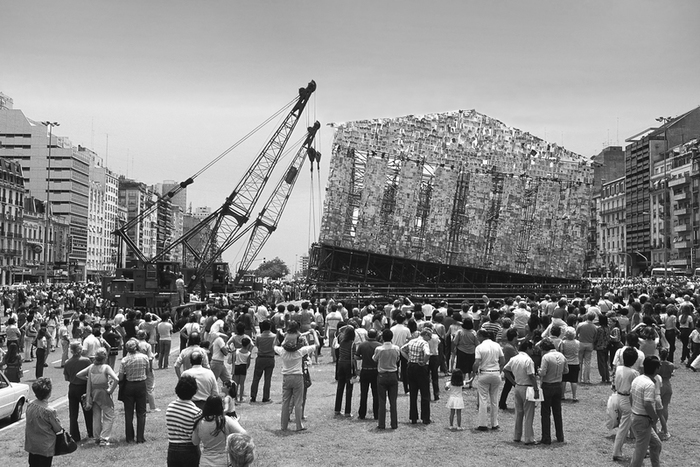 Since then, it has held four roundtable events, including one in January on the politics of curating with Documenta 14’s Curator of Public Programs, writer and philosopher Paul B. Preciado. Having invoked the concept of “the indigenous” in Documenta 14’s already ongoing public program “The Parliament of Bodies” (which was used to discuss the situation of those born in Greece but permanently excluded from citizens’ rights), Documenta was accused at the roundtable of embodying an orientalist approach toward Greece. In response, Preciado contested the accusation. “What is the position of being Documenta?”, he countered, pointing to the ambiguity of the institution, its multiple layers and reference points, as an institution “in the making.” However the accusation of orientalism points to a latent, problematic tendency among some international participants of the exhibition—visible in The Transit of Hermes as well as Marta Minujin’s Parthenon of Books, planned for Kassel—to ambiguously refer to Greek natives, Ancient Greece, and the modern Greek nation state almost indiscriminately as “Greek”—a tactic that is also used by the far right Golden Dawn to bolster an “antique” notion of democratic sovereignty based on blood right. The existence of conflicting viewpoints—from inside Documenta 14 (which was until recently shrouded in secrecy) and from outside it (a position dealing with different power structures and spheres of influence)—highlights the importance of observing Documenta’s activities from the outside. Looking forward, Learning from Documenta will present its research findings at a workshop in Athens in October.

Several other initiatives deploy a common strategy of overidentification, whereby they convincingly mimic existing power structures in society to expose the success of full-scale ideological self-identification, i.e. “woke trolling.” Examples include the Institute for the Management of the Athenian Post-documenta Melancholy (IDAMM) and Documena, whose name borrows the Ancient Greek word for “the perceptions that function as a given; those things believed in or hoped for.” Perhaps most visible among them is the Athens Biennale, whose early “press conference” at the derelict Hotel Bageion on the evening of April 5 was laced with overidentification. Titled “Waiting for the Barbarians,” the Biennale’s 6th iteration for 2018 was announced one year early together with an anticipatory public program running throughout April. The curators ask, “Will there ever be any ‘Learning from Athens’? … Are we witnessing the coming of the Barbarians, or the taming of the Barbarian?” 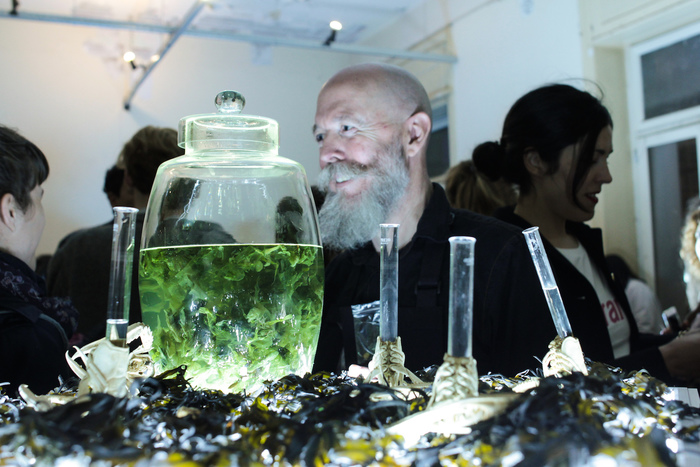 The Biennale’s press conference, which took place one day before Documenta 14’s, played out like participatory surrealist theater. A speech from the curators, who appeared to be in character, was preceded by the sound intervention Europa Clock by Dimitris Desyllas, which was performed from the façade out onto Omonoia Square, and was followed by Invasive Pests, a culinary action by The Domestic Godless in which strange, unexpectedly palatable food—like moss brownies and crispy fried fish bones—and equally unusual drink were offered to visitors on striking visual displays. The doors of the apparently abandoned hotel were opened up, inviting visitors to wander through two stories of empty rooms. On the third floor of the hotel, at the end of its main corridor, a solitary pianist, Nikos Laaris, played a single phrase of “Ode to Joy” (upon which the Anthem of Europe is based) durationally on repeat. One of the curators revealed in conversation that Documenta had originally approached the Biennale to collaborate, but in the end fruitful communication could not be established. Rather than curating a traditional exhibition in response to Documenta 14, the curators chose to focus attention on performative actions (including an ironic bus tour through the suburbs, Klassenfahrt, offered under the guise of an artificial tourist agency), leaving the Hotel Bageion mostly empty (though accessible) throughout the opening week of Documenta: “Sometimes the best statement is no statement.”

Yet do such independent initiatives as Learning from Documenta and the Athens Biennale unavoidably get rolled up into the grand narrative of Documenta 14 itself, inevitably reinforcing the institution by proxy? In their various forms of critique have the institution’s critics and “trolls” arguably made Documenta 14 more visible than it would have been without them? They indeed contributed to the “Documenta meme,” especially by creating information about it before none had been released by the institution. But to criticize them on this basis ignores the fact that they could not have been unaware of their role in the grand scheme of things: the essence of trolling, perhaps also of overidentification, is to provoke overreaction—and in some cases disidentification. 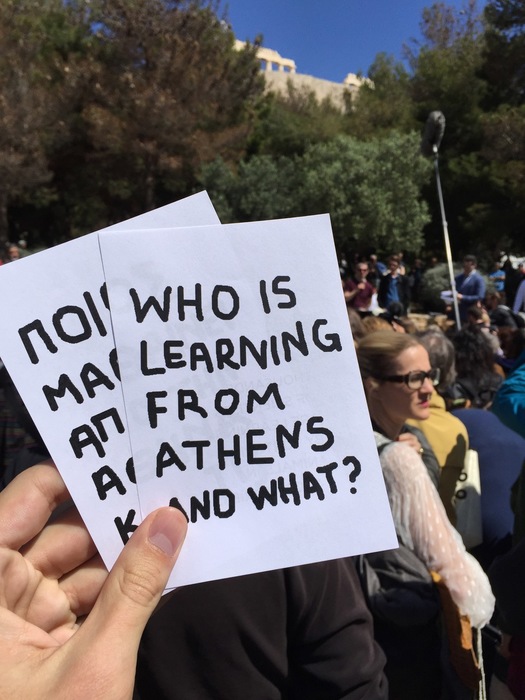 Now that the Documenta 14 exhibition has opened, it looks as though the works and locations selected do indeed oscillate between symbolic and literal readings of “Learning from Athens.” In the cacophony of highly differentiated artworks spread throughout the city, contradictions abound, which seems to be welcomed by Szymczyk, himself eluding critique by transferring it onto commissioned artists. Returning once more to the inauguration of the Transit of Hermes, it is finally worth noting that while Szymczyk, Birrell, and others introduced the artwork to the public, leaflets were distributed among the crowd of onlookers. One side read, “Who is learning from Athens and what?” and the other, “European states are learning from the refugee crisis how to control and manage populations.” Several walls bordering the public space of the inauguration displayed graffiti, one reading: “The crisis of a commodity or the commodity of crisis?” These are probably not the last interventions that will occur in the 100 days of Documenta in Athens. 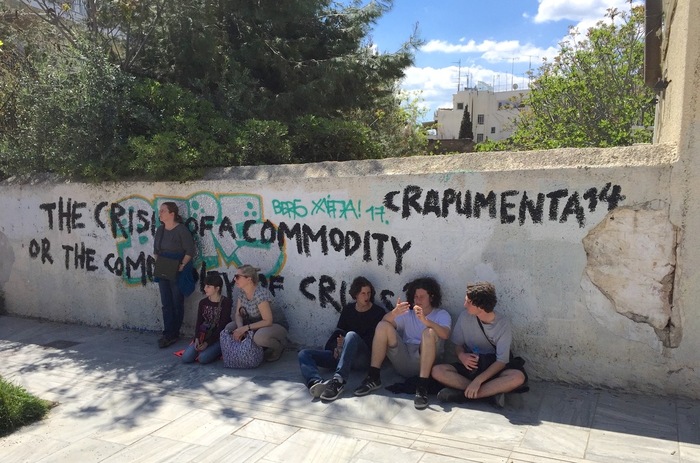 Should Documenta, as a contemporary art institution, be held responsible for nourishing citizens with food for thought instead of real food, which for some Athenians is indeed scarce? What kinds of subjectivities will Documenta 14 produce, as asked by Learning from Documenta? On the day of the opening, an anonymous online statement emerged directed toward viewers, participants, and cultural workers of Documenta 14. While it makes some generalizations and employs an alienating tone, the statement does importantly address the increasing precarity of autonomous housing in Athens, squats populated in no small part by refugees with nowhere else to turn. The statement challenges visitors to Documenta 14 hoping to learn from Athens to “first open your eyes to the city and listen to the streets.” As these squats are increasingly evicted, the statement makes clear that what Athenians need now, more than art consumerism, is solidarity. Time will tell if the surplus attention brought by Documenta 14 will in fact establish greater solidarity, reflected eventually in legislation, or, on the contrary, polarize and alienate further Athenian artists, activists, and refugees, pushing them farther into the periphery.