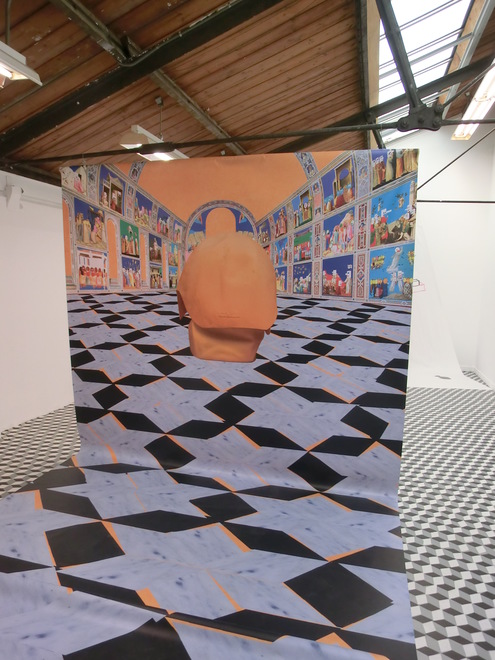 Amsterdam Art Weekend: A Look at the RijksakademieOPEN's Top Artists

This weekend Amsterdam's prestigious Rijksakademie opens its doors for the annual RijksakademieOPEN, a perennial highlight of the Amsterdam Art Weekend, a weekend packed with exhibitions and events, which runs this year from November 27–30. What happens behind the closed doors of the academy is only visible once a year for the general public, so as soon as the doors opened, I went in for a sneak peek.

The Rijksakademie is a post-academic institution offering young artists time, space, and both technical and intellectual support to focus on their work. Its residency program's tough selection process generally guarantees some interesting art—applications can reach numbers up to 1,400, of which only 50 artists from all over the world get the chance to study in the former military barracks housing the Rijksakademie. A peek into the academy's studios this season reveals many different artistic positions, working methods, and personalities present amongst the 49 current residents, and this year's presentations are of particularly high quality.

Some of the residents have already made quite a name for themselves: Magali Reus, for instance, has been praised by Beatrix Ruf, the new director of the Stedelijk Museum, and will be given a solo exhibition there in the near distant future. (Unfortunately her only work presented during the RijksakademieOPEN is a bottled scent reminiscent of new sneakers—perhaps she is focusing on bigger things at the moment.) Most, however, spend their residency time as hermits in their studios, so when the Rijks opens its gates, there's always a lot yet to be discovered. It's no wonder you'll stumble over gallerists scouting for new talent this weekend.

I present to you here a selection of eight of the Rijksakademie's most promising artists: 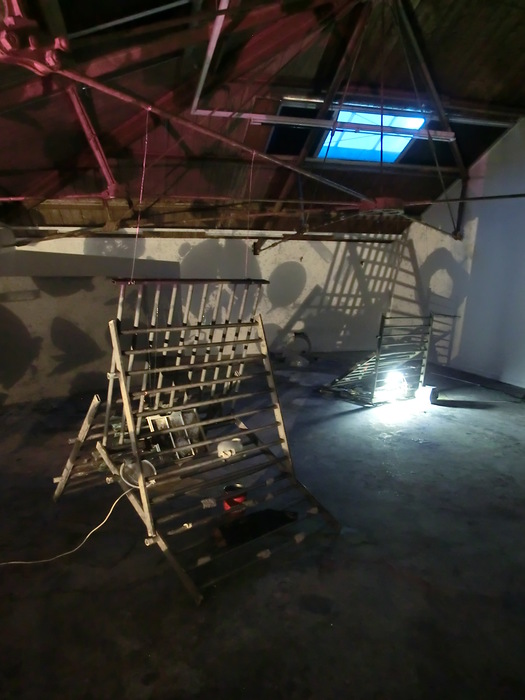 Atashi’s room-filling installation The place where I live is dark and gloomy; it is filled with constructions and projectors, presenting mostly organic material which is in a constant state of transformation. Poetic text describing the space hints at the experience of passing time. Time is indeed tangible in the installation since it is constantly subjected to change: many elements are made from organic material that will decay over time, and there are other natural transformation processes going on like the melting of ice and the heating of water. “Elements perform, dwell and the rest defined.” The poem invites the reader to “change with the space”—we as organisms transform and even decay over time—but as the poem reassures: “fermentation becomes a consolation.” 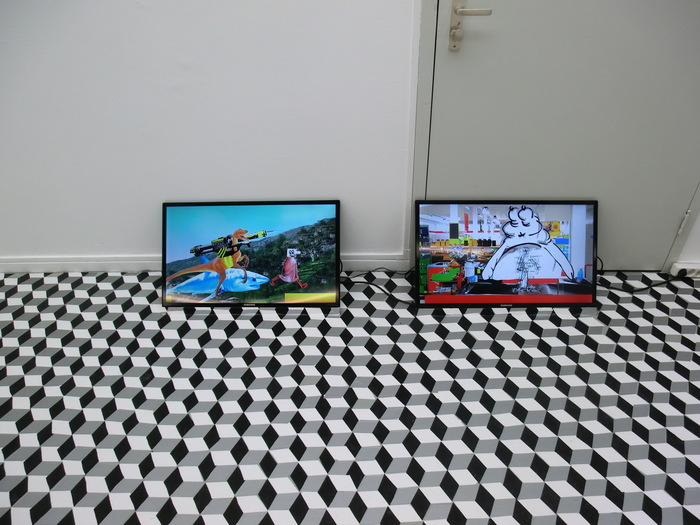 If someone had asked me what I would expect to see at the Rijksakademie my answer would never have been: a screaming character from a Giotto mural being chased by a velociraptor equipped with a bazooka, riding on a shark. But Catherine Biocca defied my expectations. Her absurd, cartoonish installation is a hilarious sensory overload consisting of animations, drawings, and digital collages. When you position yourself in an installation—in front of two of Biocca's clumsy characters who are in a nonsensical discussion about hobbies and doing nothing—and look on at the weird interpretation of the Giotto chapel they're staring at, you become a part of Biocca's absurd world for as long as you can stand it. 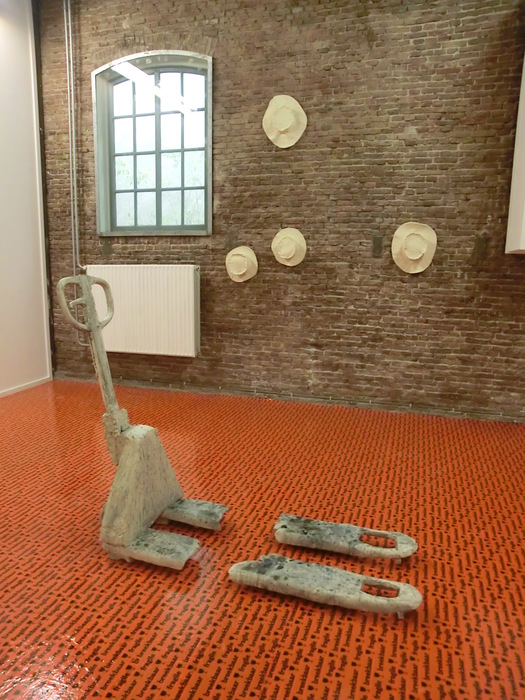 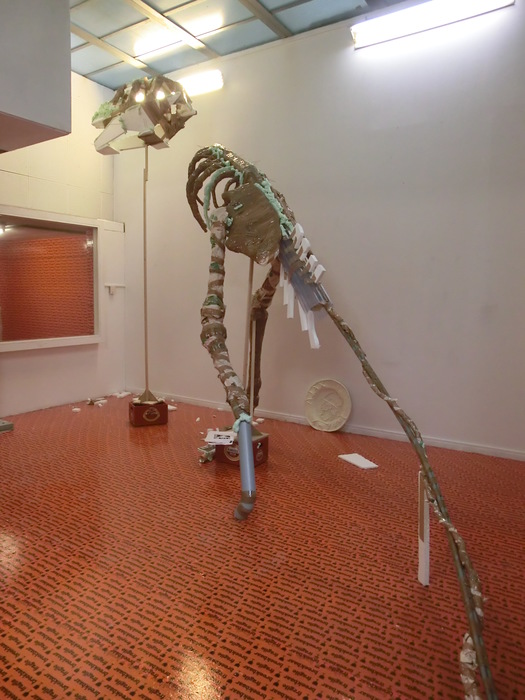 Amongst the residents who take full advantage of the Rijksakademie's ceramics facilities is Tim Breukers. He can be described as a classical sculptor born in the age of fast food, body building, and Jurassic Park. Drawing his subject matter from this rich, greasy pool of pop culture, he translates them into sculptures with the skill and cleverness of a traditional craftsman. His medium of choice is mostly ceramics, and he pushes the delicate and fragile material to its limits. Damage and accidental discoveries are an integral and important part of the finished work. The bright orange tape covering the studio's floor ironically stating “fragile!” combines both the serious and humorous, which go wonderfully well together in Breukers' work. 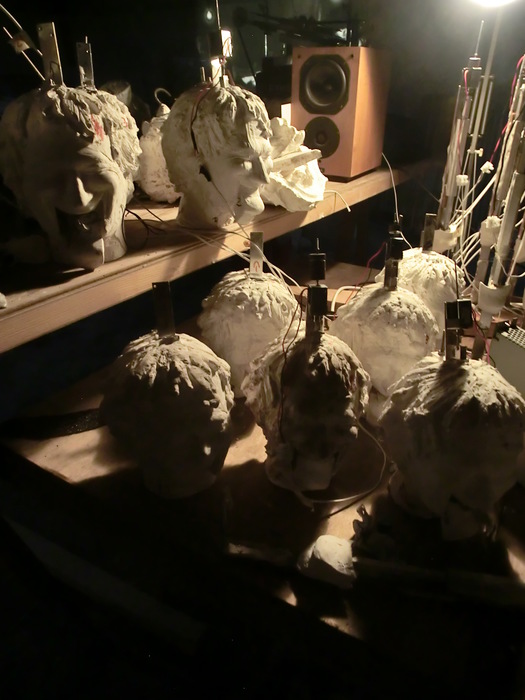 Entering the installation Shell Shock Syndrome feels like stepping into the mind of a very disturbed person. Once inside the dimly lit, eerie space you encounter 50 gypsum casts of the artist's grinning face, turned into a ramshackle mechanical choir singing the opening hymn of "St Matthew Passion" by Johann Sebastian Bach, a masterpiece about suffering, death, and resurrection. Elsewhere in the space there are construction plans of the Hindenburg and in one of the two films projected on the walls we see the artist being frightened by a stuffed animal, benumbed in his chair in terror like a traumatized soldier suffering from shell shock. The work is darkly humorous in a way and seems to praise failure and suffering as viable sources for the creation of something new. 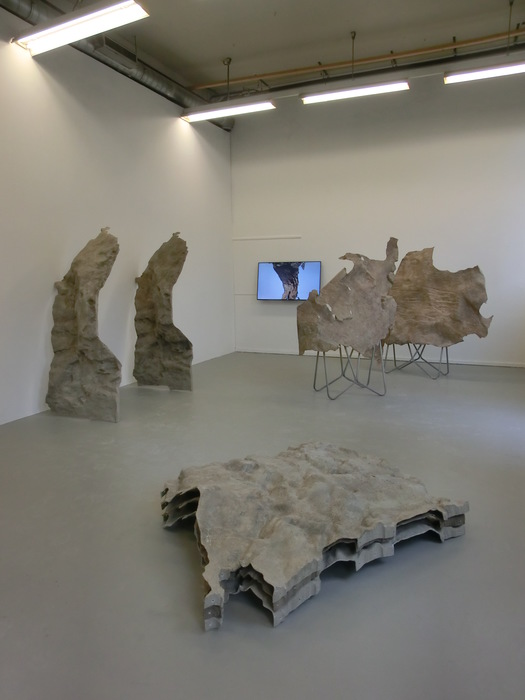 In Carlos Irijalba's work the aesthetic of 3D scanning and printing clashes with the look of his ancient subject matter. Irijalba's starting point is often geological, as it is here. After the prehistoric caves of the Spanish Cantabrian coast had been declared a World Heritage Site by Unesco in 1985, they were closed for the public. However, the national government had copies of the cave made to display as a museum. Irijalba worked with the company responsible for these reproductions and created his own. While the skin and texture of his sculptures seem to have been formed by ages of erosion and geological formation, the rhythmic repetition of the identical slabs clearly reveals their artificiality. The natural, technological, cultural, and sociopolitical aspects of this historic location overlap in this clean, yet multi-layered presentation. (Read our 2013 interview with Irijalba here.) 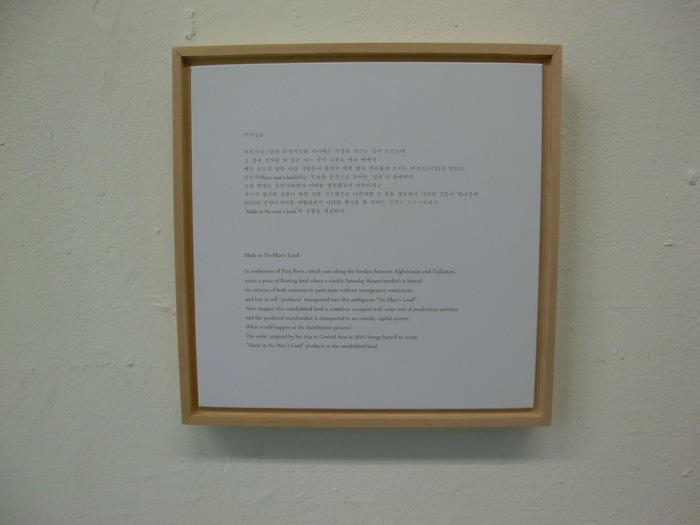 While a lot of the artists presenting themselves during the Rijksakademie OPEN try to impress with scale and spectacle, one of the more modest presentations Jisun Kim's. She has traveled throughout the world, but now employs a traveling method used by early European “armchair” anthropologists, who relied on the testimonies of others to explore the world instead of venturing out into it themselves. Kim makes her audience travel in a similar fashion by presenting the world to us through short poetic stories printed on small canvases. These mental journeys are enough to stimulate the imagination and address a wide range of topics. The small, subtle gestures result in rewarding little trips that can easily take on other more bombastic presentations. 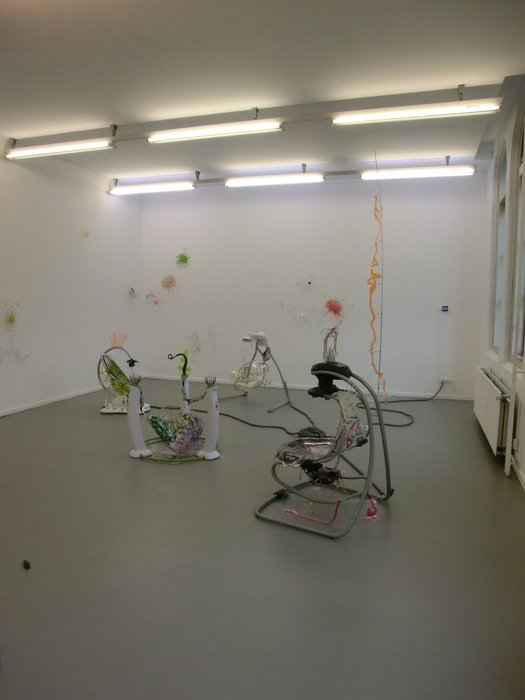 One of the residents who has managed to make quite a name for herself outside of the Rijksakademie is Katja Novitskova. In previous work she addressed the circulation of images on the internet by transforming found stock images into flat, cardboard cutout-like sculptures, re-photographing them and posting them online once again. In her current presentation she transforms state of the art, futuristic looking baby rockers into strange hybrids of machines and organisms. The once comforting baby equipment seems to have gotten a life and will of its own. The machines move without the purpose they once had, perhaps just for the sake of being “alive.” The result is a futuristic room where the borders between the natural and the technological aren’t clearly defined.

Belit Sağ (Biographical information not shared by the artist) 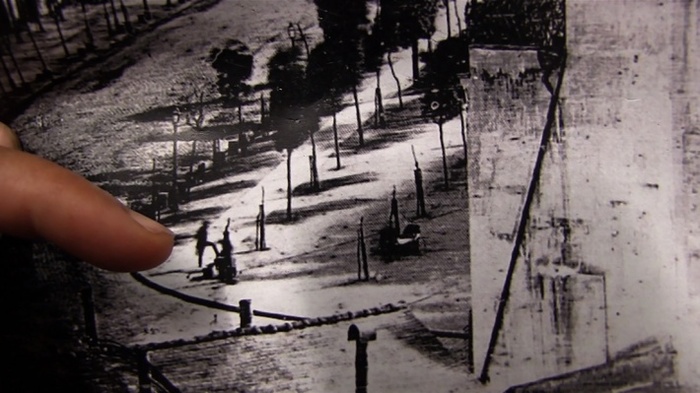 Sağ analyses news, media, and entertainment images creating new narratives from her findings. The video work And the image gazes back questions the role of images in current and historical events. For example Sağ ponders the similarities between one of the shots in ISIS's execution video of James Foley and a shot in the final scene of the movie Seven, both of which feature a decapitation. She discusses the re- and pre-mediation of images—the way they appear and reappear either deliberately or accidentally. Her findings are an artistic investigation in what it means to live in a world where fiction and non-fiction influence each other in ways we can’t even imagine.

Artists' Desks
11/4/15
COMMENTS (0)
ArtSlant has shutdown. The website is currently running in a view-only mode to allow archiving of the content.